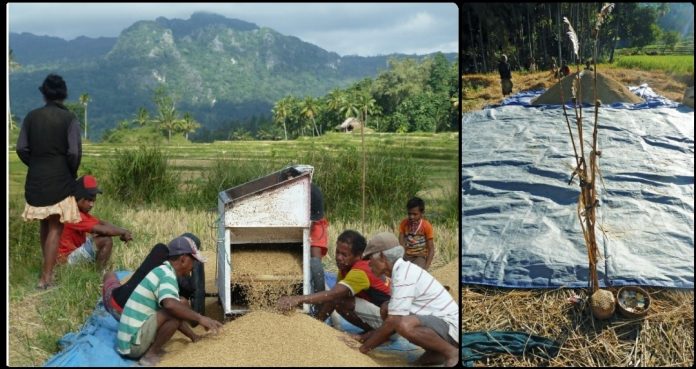 Life and governance in the rice fields of Timor-Leste, by Lisa Palmer. First published by DEVPOLICYBLOG www.devpolicy.org from the Development Policy Centre at The Australian National University.

My husband Quin is always telling our kids and me about how he spent much of his early childhood in his grandmother’s village of Bercoli, a small rural Waima’a-speaking village in the foothills of the central ranges of Timor-Leste. His memories of the rice planting and harvest seasons are of long periods spent working in the fields with members of his extended family, of the paddy being trampled by buffalo and horses, and of lots of adventures slingshotting birds for meaty snacks.

In May 2018, our family arrived in Bercoli to help with the season’s rice harvest. The rains had been good in February and March, but they had disappeared in April and most of the rain-fed rice fields had withered. Meanwhile, the rice fed by springs was doing relatively well. The valley had transitioned from verdant green to a thick golden carpet. People were expecting a good harvest.

As we walked from the road down through the already harvested sections of the fields, we noticed many bamboo lengths leaning on rocks, and tiny fireplaces in the corners of the fields. Each of these offerings signalled that the ceremonies had been carried out to seek ancestral permission for the harvest of the particular field. In the areas where the harvest was complete, more elaborate signs signalled another set of rituals was complete.

Every rice field area – referred to as an ulu (head) – has its own history associated with ancestors and ceremonies. While the repertoire of ceremonies is broadly similar, the ancestral invocations attached to each area vary.

The first ceremony required is the pre-harvest ceremony. In the Bercoli valley, this involves a chicken, eggs and a portion of the previous year’s rice offered in bamboo lengths to the custodians, the ancestors of the fields, and the springs that water the fields. Another ceremony must be carried out prior to the rice being carried home. The final ceremony of the harvest period is the sau hare (new rice consecration ceremony), in which rice is first offered to the ancestors at the origin house site in exchange for blessings on the health of all those involved in the harvest, and for prosperity in the coming agricultural year. Until this ceremony is complete, the senior representatives of each house may not consume the new rice.

The Timorese government and donor agencies have worked hard to introduce new improved, higher yielding and longer lasting seed varieties that have been distributed across the country for free. With the increased use of mechanised rice husking in the final stage of grain preparation, the bran of the rice is completely polished away, changing the grain’s taste and reducing its heartiness. This is especially noticeable in lean times, when a meal may consist only of rice and a chilli salsa. In the past, even this was filling and delicious.

While recognising that the new varieties and processes save labour time and obtain higher yields, the women in Bercoli lamented the changes. They pointed out that younger generations of Timorese no longer know how to select, and save, the diversity of seeds once tailored by farmers for local agricultural production. Nor do younger generations know as much about the stages needed to properly dry out the grains in the sun, or how to husk the rice by hand. In many cases, younger urban Timorese do not even know how to clean and prepare rice for cooking.

In the last few years, a new concrete storage area had been built in the valley for the farmers to amass the surplus yield they wished to sell. Yet by the end of the 2018 harvest season, there was growing unease among the harvesters over what was to be done with this year’s bumper harvest. Political unrest in the capital meant that for two rice growing seasons in a row, the government had not come as promised to purchase rice from the newly built rice stores. Despite a program known as “povu kuda, governu sosa” (“the people grow crops, the government buys”), government purchasers had not materialised.

The people had duly changed their rice production practices by switching to the higher yielding varieties, but now they could not sell their surplus. Similar situations across the country led to the coining of another more popular slogan, “povu kuda, governu sae” (“the people are the horses, the government ride them”). (Kuda can translate either as “to grow crops” or as “horse”.)

In my many conversations with foreign aid and development workers in Timor-Leste, I have noticed that it is often within the agricultural sector that development workers struggle most, especially with the cultural aspects of Timorese livelihood practices. With their focus on efficiency and markets, foreigners will often remark on the travesty of wasted resources, and priorities given by rural people to ceremonial life. They observe that people who are so poor and nutritionally challenged think nothing of slaughtering many of their livestock for rituals. All that good food, just wasted. They lament that Timorese rural people continue to feed their children poor quality foods, despite all the nutritional education that has been delivered. The Timorese are criticised for being slow to immerse themselves in the market economy.

Some Timorese echo these views. One man, enthusing about the mega-project development initiatives currently preoccupying the Timorese political elite, told me how his part of the country was being transformed. “There are now so many jobs and so much development”, he enthused. “Soon”, he told me, “people will not have to grow corn or rice. They will have enough money to buy their food.”

Despite formal employment being scarce across the country, escaping life as a rural farmer is  an idea that resonates with many Timorese ideas about prosperity and the future. The last thing most people want their children to be is a farmer. Modernity is characterised as the pathway “out of the darkness” of rural life and into “the light” of the future.

In the face of all these challenges, life in the Bercoli rice fields goes on. Given Timor-Leste’s ongoing, and perhaps even heightened, pandemic-induced, reliance on small-scale agriculture, the question is how the government and others can best mobilise resources to support it.

This is an edited extract from Island encounters: Timor-Leste from the outside in (ANU Press, 2021). 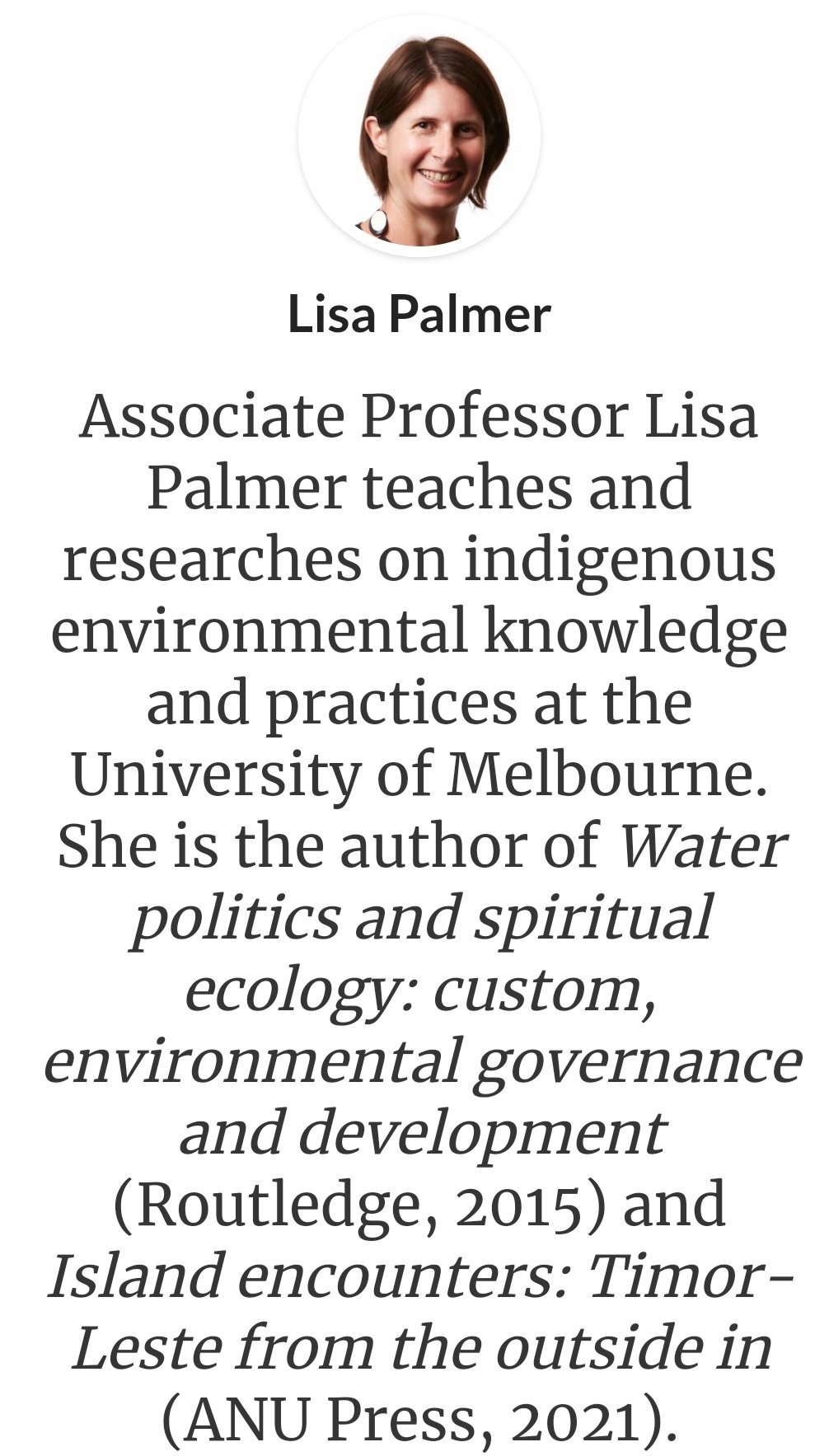