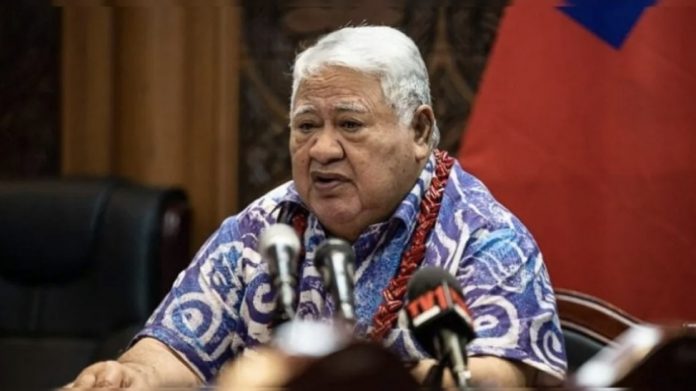 In a letter to the editor sent to all local media outlets, the leader of the opposition and former Prime Minister of Samoa, Tuilaepa Dr Sailele Maliegaoi has questioned the process around the $1 million tala development fund allocated in the national budget to each of Samoa’s 51 electoral constituencies.

Tuilaepa questions the process by which the District Development Committees are selected and disapproves of the project-based approach to the fund. The former Prime Minister alleges that Cabinet Ministers are visiting electoral constituencies to explain the process and says this is an action that should be done by CEOs.

The letter is published in verbatim below.

LETTER TO THE EDITOR

No District would ever reject a gift of one million tālā per district given freely without strings attached, if the only cost was the vote.

The votes have been cast already but now the promised gift has shrunk to only $200,000 in year one.

The one million tālā is now provided in the budget for year two (2022/2023) but the gift has changed to project funding!

Approval of each project is done by the Ministry and the connotation is unpleasant.

It is recommended by the district committee which was originally chosen by the Chiefs and Orators of the District without any political bias, but now its composition in HRPP Seats must have FAST members with no such conditions on FAST Districts for HRPP members.

Visitation by Cabinet Ministers of all districts is now conducted to explain the technical processes instead of CEOs.

Reason is, this way Chiefs and Orators and others will be distributed moneys direct by way of Lafo, using our cultural practices to disguise the use of public funds to buy political support at the rural communities.

Therefore, donor representatives in Apia are easily hoodwinked on the use of their budget support as if that was the norm and nothing wrong was done.

Village Chiefs would of course provide fine mats, pigs and all.

Both FAST Ministers and their village cohorts get paid handsomely in kind.

Three officials to serve the committees are paid high salaries.

It seems that this seemingly wonderful initiative is deemed a masterful invention of the mind in Political Science that no one else outside of FAST can comprehend.

My only small advice to Government is to Cut the Bulls Ears and get on with the release of this 1 million tālā promise and without strings and also adopt good governance principles as Prime Minister Fiame loudly proclaimed to follow during FAST campaigns.

As well, only the Minister in charge of village development should speak on this million tālā gifted to Districts.

Confusion arises due to interventions by the Agriculture Minister, who should confine himself to planting tomatoes.