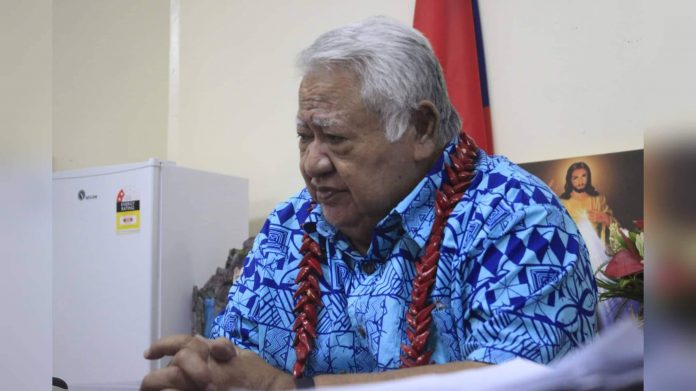 I was asked recently by the Media for my comments on the recently reported speech by the Minister of Police (a friend in our Rugby Union days) that the last Commissioner of Police was a political appointment by the previous Government.

The Minister, a lawyer and former District Court Judge, was referring to the appointment of the last Commissioner of Police who had not served in our Police Force.

If the Minister had checked first with his Prime Minister Hon. Fiame Naomi Mata’afa who was my deputy at the time, Fuiavailili Egon Keil was appointed as Commissioner of Police, he would not have made the above-mentioned statement.

The vacant post of the Commissioner of Police at the time had many applicants and the Interviewing panel ranked the top 5 after the interview.

Fuiavailili Egon Keil was the panel’s first choice and he was accordingly chosen on the basis of that Panel’s recommendation.

Good Governance Principles relating to the Appointment Process was followed by the HRPP Government.

Fuiavailili Egon Keil, a Samoan, had served with distinction in the United State Police Force.

On retirement he returned with his family to live in Samoa.

During his time as our Commissioner of Police, he introduced many reforms which greatly raised the morale and improved training, physical fitness, discipline and professional work ethics of the police.

And he personally led many police raids on their drive against illegal drugs.

Fuiavailili Egon Keil resigned from his post in 2021 over a matter of principle, and I must thank him for his great service to Samoa.

All information related to the engagement of Fuiavailili and all CEO’s of the Government of Samoa during the HRPP Administration Cabinet.

It is always prudent for new Ministers to consult first with Prime Minister Fiame (and Laauli) who sat in my Cabinet as HRPP members (before they changed allegiance) and who should be most knowledgeable of the Good Governance Principles upon which our Cabinet decisions were based.