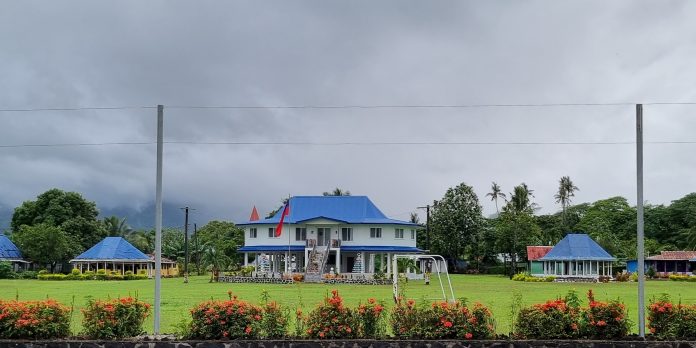 Police had launched an investigation into the incident that occured outside the Mulinuu Courthouse, where Samoa’s longest serving Prime Minister was confronted by two overseas-based women as he was trying to get into his car after the special prayer service for the Judiciary and Courts last Friday.

Witnesses say the women approached the opposition leader as he was trying to get into his car. One of them collared Tuilaepa and held him by the neck in the attack.

When police approached had Tuilaepa regarding the incident, he did not want to press charges.

Although the women are overseas-based Samoans, high chiefs of Lepea village responded swiftly when it was discovered the women’s families are rooted in the village of Lepea.

The Village Council and High Chiefs of Lepea met in the early hours of Monday morning, and the decision was unanimous that a formal traditional apology had to be performed for the sake of maintaining peace amongst village relations.

A member of the village, Seiuli Marcus Faumuina posts in a public statement, that their village has been put to shame by two people who have been “tataa” overseas. (Living outside of the village without any contribution to community development).

Unsurprisingly the two women have been banished from the village and their families have been fined for the pair’s bad behaviour.

The Faa-Samoa are a set of cultural practices based on deeply rooted values that have been upheld by the people of Samoa for over 3,000 years.

It is based on values such as va fealoai (sacred relationships), va nonofo (living together in harmony), faaaloalo (respect between people including a high level of respect for elders) and alofa (love).

The leader of the Human Rights Protection Party did have a Government funded Security Detail assigned to him immediately after he left the Office of the Prime Minister in July 2021, however, that had ceased.

In 2018 while he was still in Office, Tuilaepa was attacked by an overseas-based Australian Samoan Talalelei Pauga while attending a Samoa Airways event in Brisbane Australia.

Pauga interrupted a meeting at the St. Maximillian Kolbe Catholic Parish in Marsden Brisbane when he uttered abusive words and threw a pigs head towards Tuilaepa.

In December 2020, Taualai Leiloa was sentenced to five years imprisonment for conspiring to murder Tuilaepa. The self-confessed hitman pleaded guilty to being part of a plot to murder Tuilaepa Sailele at the time.

In his signed confession Taualai says he had received money, a vehicle and a weapon arranged by Australian based Talalelei Pauga, with instructions to gun down Samoa’s then Prime Minister.

Justice Tafaoimalo Tologata Leilani Warren, in delivering the five year prison sentence for Taualai Leiloa said, “A conspiracy to murder the Prime Minister of any democratic country in the world is an attack on democracy itself. It cannot and should not be taken lightly..”