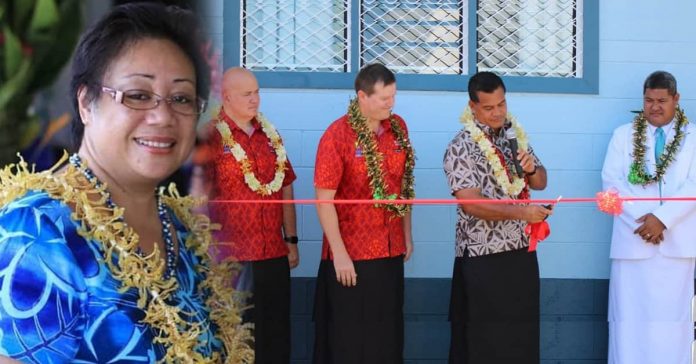 The Digicel Samoa-led project in honor and memory of the late Laeimau Oketevi Tanuvasa Savea took a short 6 months to complete, from the groundbreaking in June.

The Minister of Communications and Information Technology says the efficiency and timeliness of this project is reflective of what Laeimau represented.

“Laeimau was a true pioneer of the IT industry; we all remember her no-nonsense approach and her drive to get things done,” said the Minister.

“When Laeimau would set her sights on a project, she stayed the course, and remained focused until it was completed. She will always be missed and remembered as an industry leader”, he added.

Laeimau Oketevi led Computer Services Limited as CEO and was also a Board Director of Digicel Samoa Ltd.

Digicel CEO, Mark Witthuhn spoke to pay tribute to a woman who played a significant role in advocating and lobbying for the establishment of Digicel in Samoa, as well as developing Samoa’s ICT Sector.

“In your honor, Laeimau Oketevi, we are proud to celebrate your life and continue your legacy.”

“We honor the late Laeimau and our hopes are pinned on this beloved project that it may be used as an instrument to bring to our children, the best quality in learning and understanding so they may take advantage of the benefits of information technology”, said the Digicel CEO.

Mr Witthuhn says the project aims for our young children to develop an interest in information technology, and to influencing accelerated learning, awareness and practical education in ICT.

“We are happy to confirm that this building will not be limited to a computer lab, but become a learning center to host open educational programs and workshops to enable our kids to experience and learn about ICT.

The Tevi’s Learning Center is now open and will be co-managed by Samoa Primary School and Digicel Samoa Ltd.

ABOUT DIGICEL GROUP
Digicel Group is a total communications and entertainment provider with operations in 31 markets throughout the Caribbean, Central America and Asia Pacific. Digicel also runs a host of community-based initiatives across its markets, including Digicel Foundations in Haiti, Jamaica, Papua New Guinea and Trinidad and Tobago which focus on educational, cultural and social development programs.
Visit www.digicelgroup.com for more information.