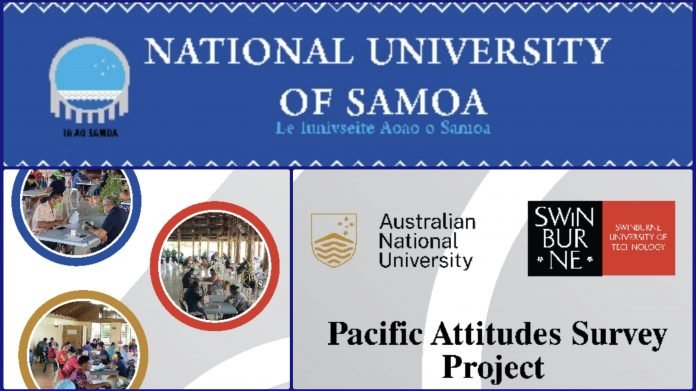 The “Pacific Attitudes Survey (PAS): Samoa”, a pioneering survey of popular political attitudes in the Pacific will be launched 9 June 2022.

The PAS looks into the views of ordinary Samoan citizens on a range of questions related to
democracy, economics, governance, tradition, trust in institutions, climate change, social media, and international relations.

The survey was conducted in Samoa from December 2020-January 2021 by the National University of Samoa (NUS), with a national representative sample of 1319 Samoans of voting-age.

“The strength of the findings in the Pacific Attitudes Survey report underlines a
genuinely collaborative and rewarding three-way partnership between ANU, SUT
and NUS”, said Professor loana Chan Mow.

While large-scale popular political attitudes surveys have been conducted globally for
several decades, the Pacific region has remained a notable exception, until now.

The PAS project, funded by the Australian Department of Foreign Affairs and Trade’s Pacific Research Program, drew upon core modules of the popular Global Barometer Survey (GBS) to allow for international comparability, the PAS also adds a host of new questions of specific relevance applicable to Pacific contexts.

Professor Michael Leach said “The Pacific Attitudes Survey: Samoa gives voice to ordinary Samoan citizens in comparative international debates where there has previously been a lack of popular attitudinal data.”

The findings from the PAS will provide an important frame of reference for key issues in Pacific politics; including how ordinary citizens engage with and trust their political institutions, their broader understandings of democracy and tradition, and attitudes to key issues like climate change.

According to Associate Professor and Head of the Depart of Pacific Affairs Julien Barbara, the Pacific Attitudes Survey Samoa offers a glimpse into the future richness of data
that a regional popular political attitudes survey can provide. She added they intend to expand the PAS to other countries in the region.