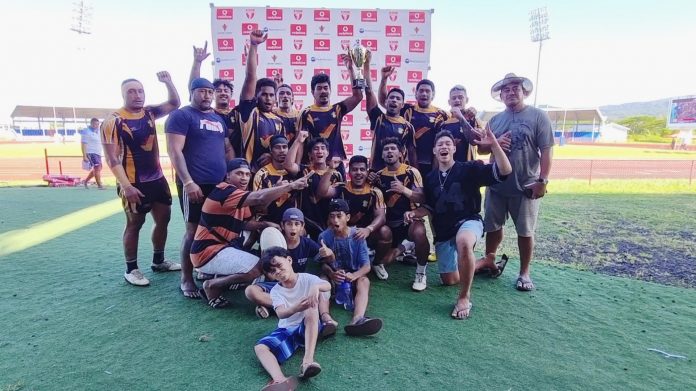 A developing rugby 7’s team that joined the Vodafone National Series for the first time in Round 3 have taken out the Cup Championship trophy in Round 5.

Laumua o Tumua clinched the win over  Tama Uli by 14 – 12 in the final, with the winning try by Mikaele Toilolo.

The 25 year old from Tufulele has stood out in each of the three outings by Laumua o Tumua, and when up against the might of Tama Uli in the Cup final, he remained calm and consistent in cutting up the defense.

The Player of the Tournament was awarded to Tulasili Faatasi by Lakapi Samoa Board Member and Member of the World Rugby Judiciary, Matafeo George Latu.

The 17 year old showed confidence on the field against much more experienced sides during the two-day tournament as he helped his team to the Cup Championship.

Afega is a new team. Their first outing was in Round 3 of the national 7s series just two months ago in October this year.

On their first tournament they won the 9th place Bowl final. On their second outing in Round 4 they made the 5th place Plate final but were edged out by Tama Uli to finish 6th.

For Round 5 last Saturday, Laumua o Tumua Afega defeated Tama Uli who was the top seed for Pool D. They went undefeated to top their pool and meet Fauula Letogo in the quarterfinals. In the semifinal, Afega defeated reigning national champions Tepatasi.

The Afega village side was recently re-ignited when Pacific Games boxing gold medalist, Hugo Fata, made the move away from Ulalei Vaiala to develop a team from his home village.

Fata says Ulalei Vaiala is a well established club that continues to attract many young players, even featuring two teams in the national 7s series. (No Idea is Vaiala’s second team).

The 33 year old veteran said it was time to move on and help develop the Laumua o Tumua side, not only for Afega but also for youth from surrounding villages in the District.

He said Lakapi Samoa’s Development Officers approached him after Saturday’s final and asked for two of his players.

“There is a lot of natural talent on Samoa and it’s good for them to be noticed by the national coaches,” said Hugo Fata.

“At the end of the tournament, the development officers came and asked me about two of our forwards – Mikaele Toilolo and Pā’o Lauama.”

Laumua o Tumua Afega will be looking to try and enter a 7s team in the annual Marist St Joseph’s International tournament usually scheduled for Feb/March each year.