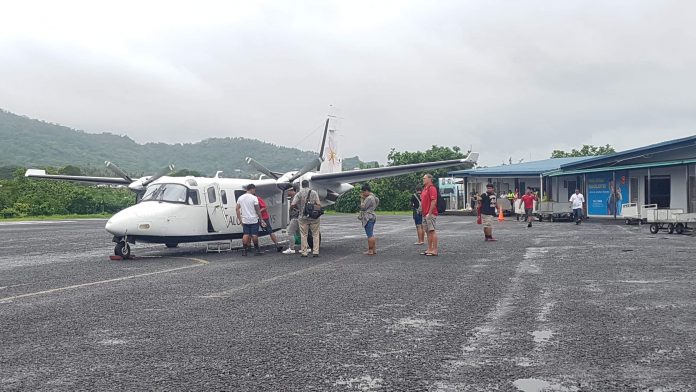 The last passengers to depart Fagalii airport left on a Talofa Airways flight earlier this afternoon just before a ceremony to officially close the domestic airport.

This is not the first time the Samoan government has decided to close Fagalii airport which caters for travellers to and from American Samoa.

Fagali’i Airport which was at one time a grass-only airstrip, was paved and reopened on 6 July 2002 only to be de-commissioned in January 2005 due to Government and village concerns over safety and noise.

On 1 July 2009, Polynesian Airlines reopened Fagali’i airport and resumed a service that included international flights to American Samoa. The reopening of the airport was controversial at the time and attracted criticism both for the safety and environmental issues given the airport’s configuration.

Ten years later the Government has.again decided Fagalii is unsafe and held yet another official closing ceremony for the 670 metre asphalt airstrip.

Prime Minister Tuilaepa Sailele Malielegaoi spoke at the closing ceremony and confirmed that Fagalii airport was being closed because it had been declared unsafe.

The Prime Minister said the area at Fagalii would be utilised by the Samoa Police Service as a defensive driving course.

According to the Prime Minister, defensive driving would start with the Police themselves. The Ministry would then move onto drivers of taxis and buses to ensure public safety, as well as all government department drivers.