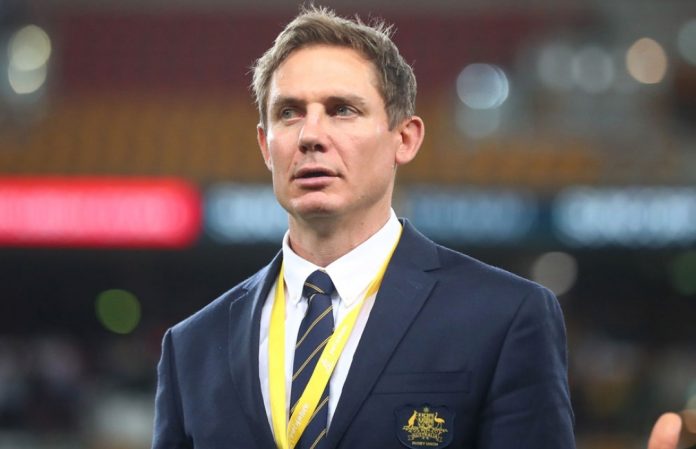 Larkham, who joined the Wallabies setup ahead of the 2015 Rugby World Cup, has been axed from Wallabies, citing “differences in attacking strategy” with head coach Michael Cheika.

The 44 year old former Crusaders  the sole casualty after the Wallabies 2018 season where they won just four wins from 13 Tests.

Rugby Australia Union CEO Raelene Castle says Larkham’s differences with Cheika had been raised as part of the Wallabies season review and it was Cheika who had led the decision-making.

“During the post-season review when they came back and obviously looked at the Wallabies performance, everyone identified that the Wallabies didn’t play well enough this year or consistently enough and therefore deliver results,” she said.

“So when they sat down and had those conversations there was a philosophical difference between the attacking styles and ultimately they agreed that for Bernie (Larkham) to move on was the right thing to do.”

Asked why the move wasn’t announced earlier, Castle said the pair had worked to move past their differences.

“When you’ve got two coaches with great experience and really good depth of knowledge whether it be attack or defence, you want to try and work those things out and you also don’t want everyone to agree all the time,” she said.

“You need challenge and differences of opinions to make sure that what you do in the final outcome is grow and develop it but ultimately they didn’t think that the core elements of attack was aligned and so ultimately that’s where they believed it was the right thing, Michael believed the right thing for Stephen to move on.”

Castle said some possible successors had already been identified but that decision wouldn’t be made until after Johnson arrived in Australia next month.

“There’s no rush. We have identified some people but there’s certainly no rush on that appointment and we’d like Scott to be involved in that process,” she said.

“Other assistant coaches are still in place an that’s the coaching team with the addition of a new attack coach that Cheik believes will be the team to take them through to the World Cup.”

In a statement, Larkham cited “differences in attacking strategy and overall game philosophy” with Cheika.

The news is a big departure from even 18 months ago, when Michael Cheika all but anointed Larkham as his Wallabies successor.

“Ultimately Michael is responsible for the performance of the team. We have differences in attacking strategy and overall game philosophy. We couldn’t agree on these key points and it is in the best interest of the team that they receive clear and consistent messages from their coaches,” Larkham said in a statement.

“I am obviously disappointed with this outcome as I had chosen to pursue the experience of taking the Wallabies through to the World Cup, however I am pleased to be able to continue coaching and contributing to Australian Rugby in this new role.”

Larkham won’t be leaving Rugby Australia despite the end of his Wallabies tenure, instead moving into a national coaching advisor role, helping Australia’s representative teams from the Wallaroos to Sevens to Junior Wallabies and state-based academies.

Castle said the door would still be open down the track for the legendary flyhalf to return to the national setup.

“No not at all. That’s why we’ve put the support around him to make sure he can continue to grow and develop and that there is a future for him inside coaching in Australia and inside the Wallabies programs in the future.”

Masters is also set to be replaced before September’s World Cup but in the meantime long-time strength and conditioning expert Dean Benton, who has worked across rugby league and rugby around the world, will be working with the Super Rugby teams and Wallabies on a contract basis.