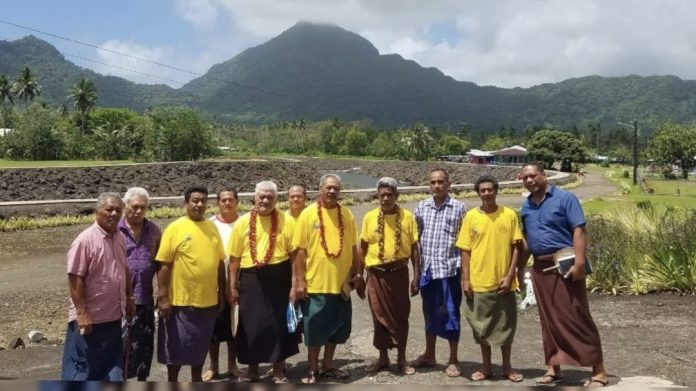 The village council of Lalomauga have committed their village as messengers of peace, against the abuse of women and girls.

The commitment was made during a 2-day workshop with Lalomauga as part of the Government funded project implemented by the Samoa Victim Support Group to eliminate violence against women and girls.

According to the village council, Lalomauga is one family all attending one church, the Congregational Christian Church of Samoa.

And right underneath the mountain stands the Holy Throne of the Lord – O le Nofoalii Paia o le Atua.

This is where the key message of Lalomauga’s Community Guide was drawn from: “ O OLOTAVAE MA MATEILONANUU ARE THE MESSENGERS OF PEACE WHERE WOMEN AND GIRLS ARE SAFE”.

According to the leadership of Lalomauga village, Olotavae and Mateilonanuu are the two meeting houses for the high chiefs of the village.

With the arrival of Christianity, Lalomauga has set up a third and most important meeting house, the Holy Throne of the Lord – this is why the village refers to themselves as the Messengers of God, for peace and unity.

“There was a sense of pride and an overall feeling of ownership amongst the participants once they completed the first draft of their Community Guide,” said SVSG.

According to the village leaders of Lalomauga, being able to discuss and document some of the Samoan proverbs, legends and myths pertaining to their village has been a valuable exercise for the younger generation who were present.

Reverend Sakaio Maiava of the Congregational Christian Church of Samoa at Lalomauga, commented on the importance of the workshop as the village council had opened up the opportunity for the women, untitled men and younger men to take part in designing the Community Guide.