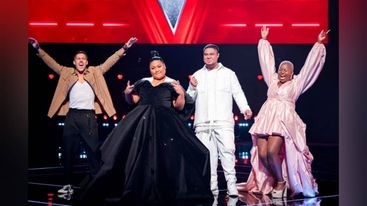 After 67 blind auditions, only one artist was left standing as the winner of The Voice Australia 2022.

Vying for the title was Lachie Gill from Team Rita, Thando Sikwila from Team Keith, Jordan Tavita from Team Guy and Faith Sosene from Team Jess.

On Sunday night, Australia voted for the winner – Lachie Gill.

Lachie, 24, has won $100,000 in prize money and a recording contract with Universal Music Australia.

“From the start I just never, ever, ever would’ve expected this and I’m just blown away. Thank you so much,” Lachie said.

A jubilant Rita added: “My face hurts! This is amazing and I feel like this is just the beginning for you.”

Lachie earned himself a spot on Team Rita with his blind audition of JP Saxe’s If The World Was Ending.

The artist went from strength to strength and went to the grand finale with his powerful performance of Olivia Rodrigo’s Good 4 U.

Ahead of being crowned the winner on Sunday, 7Entertainment spoke with Lachie about what it would mean to win The Voice.

“I never in a million years thought I would make it this far in the show so to have a chance at winning blows my mind,” Lachie said.

“Not only would the prize money go a long way in changing my life but to be signed with Universal Music is an opportunity that I will not take lightly.

“I’m absolutely ready to make a name for myself in the music industry so to have the support from a label would be a dream come true,” he went on.

“Regardless of the outcome, I’m so grateful for the opportunity this show has provided me with.”

Lachie went on to detail the important lessons their coach Rita has taught them throughout their Voice journey.

“The biggest thing for me was confidence and belief in my own ability,” Lachie said.

“I don’t have the biggest and best range or can hit the highest notes, but when I sing it comes from a pretty deep place and that’s what people resonate with.”

The artist admitted he “shocked himself” at what he was capable of doing on the show.

“I became more comfortable every time I walked out on the stage, and I think a big part of that was the confidence that Rita and the music team instilled in me,” he said.

The Australia Daily Mail has reported Australia fans slam the show for whitewashing after Lachie Gill is crowned the winner.

According to daily mail reported several viewers posted to Twitter to express their belief that Lachie only won because he is white.

‘Surely no one is surprised the pretty white boy won,’ one person tweeted, while someone else added: ‘Lachey won? Sounds about white’.

‘No surprise there. Three world class vocalists and and one AFL player who plays guitar. Australia gonna vote white’, another tweeted.

‘Yep a white boy with no voice won #TheVoiceAU. What more could go wrong aye? Stop white washing everything. Stop making us all look bad. We must demand to see all the votes that came in,’ one more chimed in.

‘Well… that was a waste of time – three incredible singers of colour and the mediocre white guy won’.