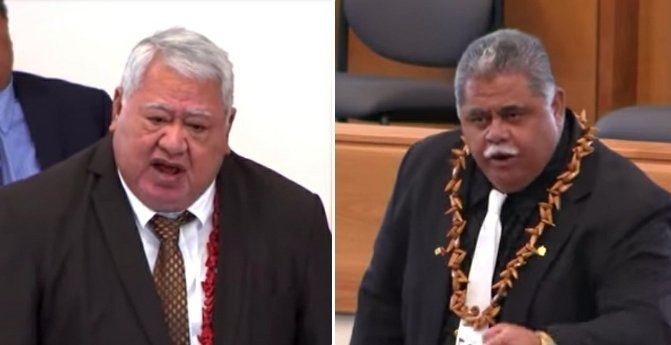 The leader of the newly established political party in Samoa, Laaulialemalietoa Leuatea Polativao Schmidt, known for his strong oratory voice, was heard yelling across the floor to Prime Minister Tuilaepa Sailele Malielegaoi to sit down, after being repeatedly disturbed by the Prime Minister who had also belittled Laauli’s knowledge of Parliamentary Standing Orders, and told Laauli to ‘sit down’ (nofo i lalo).

“You sit down!” yelled back the leader of the Faatuatua i Le Atua Samoa ua Tasi (FAST) who had previously been calm during yesterday morning’s Parliamentary debate.

Prime Minister Tuilaepa Sailele Malielegaoi had just completed an hour long presentation of the Meteorology, Geoscience and Ozone Services Bill that will guide the work of the Samoa Met Office including advanced technological approaches to improve Samoa’s readiness for natural disasters.

Laauli was the first member to request a time on the floor after the Bill was presented. He agreed with the critical need to update legislation for meteorological services in Samoa. However, before speaking to the proposed legislation, Laauli requested the Speaker’s indulgence to allow a few words of encouragement for two Members of Parliament missing from yesterday’s sitting, having been removed last month for crossing the floor.

Two Independent MPs, Olo Fiti Afoa Vaai and Faumuina Leatinuu Wayne Fong were removed from Parliament for breaching s140(4) of the Electoral Act by failing to remain as independent members for the entire parliamentary term.

Laauli had requested the Speaker for an opportunity to say a few words of encouragement to the outgoing MPs, however, the Prime Minister stood to claim Laauli had gone against Parliamentary Standing Orders by speaking off-topic, and continuing without waiting for the Speaker’s decision to his request.

“Mr Speaker, are we opening the floor to general topics? Are we moving to other issues and setting my presented Bill aside?..

“Mr Speaker, that is why I stand to make known to the representative of Gagaifomauga No.3, who seems to have absolutely no understanding of standing orders..this MP was once a Speaker of the House himself, and yet, he still doesn’t fully understand the standing orders of this House..”

Turning to Laauli the Prime Minister says, “You’ve been sitting here for years, and yet, you still don’t know or understand..”

For the third time, the Speaker of the House tries to calm the situation and with his usual mediation approach and soothing voice, Toleafoa Faafisi reclaims control of proceedings.

Laauli then stood and with the calm remorseful voice of Samoan oratory, reinforced the Speaker’s role as the head of Parliament, but asked for the Speaker’s discretion because as Independents, said Laauli, their voice is not heard in Parliament.

However, Laauli then moved into addressing the name-calling by the Prime Minister.

“Mr Speaker, the leader of the government is always allowed to make defamatory remarks towards us…”

The Prime Minister is then heard talking over Laauli and stands to make a correction, with the famous, “Lau Afioga, o le mea e fia faasa’o!”

At this, Laauli then takes a much more aggressive approach and raises his voice, which fills the House of Parliament. “Mr Speaker he is still at it.., how can we continue to let him do this?”

Turning to the Prime Minister, Laauli says, “Who are you to question the representative of this Constituency?

The heated debate reached its pinnacle at this point, with the two party leaders yelling at each other to “sit down”. The phrase has a much more serious connotation when spoken in the Samoan language because it goes against the grain of cultural ‘va’ or sacred space, where matai are expected to intently listen, until it is his or her turn to speak.

The Speaker then intervenes and threatens to call in the Sergeant-at-Arms to remove Laauli and Faleata MP Leailepule Rimoni Aiafi, who started to engage in an exchange of threatening words towards each other.

After the Speaker of the House calms down flying emotions, not unlike as would be done by a school principal in a primary school playground, Laauli revealed that the reason he is stirred up is because there are Associate Ministers whom he believes should also be removed from Parliament for misconduct.

It was not clear whom Laauli referred to which triggered the Prime Minister to then also call him a liar in Parliament.

Mulipola Leiataua Laki is a Member of Parliament whose application for candidacy in the upcoming general election has been rejected by the OEC on the grounds of a car accident that resulted in the death of a young boy.

The Speaker closed the issue by saying Parliament is not the place to discuss Court proceedings of cases previous or pending.