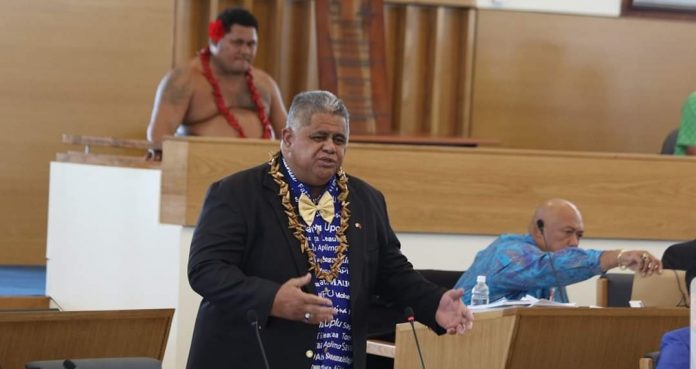 Former Minister of Agriculture and Speaker of the House, Laaulialemalietoa Leuatea Polataivao Schmidt walked out of Parliamentary proceedings this afternoon, having given his verbal resignation following the tabling of a report that investigated the MP over the purchase of personal property, which he had given in Parliament as a general example to make his point about excessive costs of a standby generator listed in the supplementary budget of December last year.

Laauli then asked the Minister of Finance and the Chair of the Parliamentary Finance and Expenditure Committee to reconsider the amount budgeted, his point being that it was excessive.

In response to Laauli, the Chair of the Parliamentary Finance and Expenditure Committee Aliimalemanu Alofa Tuuau told Parliament at the time, that the Prisons and Corrections Management had looked into three quotes and the amount budgeted for was based on the least cost, with specifications and requirements considered.

In an attempt to make his point, Laauli told Parliament that he could provide evidence that a 200KVA standby generator was less than ST100,000.

The Prime Minister who had interjected the debate several times that day, then requested evidence for Laauli’s claims and asked that this be tabled in Parliament. Tuilaepa explains that the implications towards the process were serious and the issue needed to be looked into.

In a quick turn of events, a query into an expenditure item during the tabling of a supplementary budget seemed to have backfired on Laauli. A Special Ethics Committee of Parliament launched into a thorough investigation of Laauli following December’s Parliamentary sitting.

The MP became the centre of an investigation to scrutinise the customs duty applied to his own generator which had been imported via the Freight Plus company.

On the 29th of February 2020 the Samoa Observer reported that a customs officer had been suspended after irregularities were allegedly found in the paperwork pertaining to the Member of Parliament’s generator.

The Parliamentary Committee carried out a full and thorough  investigation – not into the $300k budgeted Tanumalala standby generator queried, but rather, into Laauli’s personal purchase standby generator, to determine if he had knowingly misled Parliament.

During the investigation Laauli told Samoa Global News that the act was an avoidance tactic for the Parliamentary Finance and Expenditure Committee to focus on him, instead of responding to his very simple question about the cost of a 200KVA generator.

“First, why does the generator cost $300,000 and second, what were the three quotes received?”

What Does a 200KVA Generator Cost?

Requests for quotes from credible suppliers in New Zealand and Australia for a 200KVA standby generators, ranged from USD$8,000 – USD$22,000 or Samoan Tala $24,000 – $66,000 before freight and customs duty.  Now scrutinised, the response from Prisons, it that the total cost of $300k includes installation, and a station building to house the generator for Tanumalala Prison.

Today, the Parliamentary Committee’s Chairman – Nafoitoa Talaimanu Keti tabled the Committee’s findings and detailed its investigations. He spoke about invoices they had sighted, and the witnesses they interviewed – to conclude that Laauli had in fact, only purchased a 30KVA standby generator.

Nafoitoa stated, that Laauli had not purchased a generator as he had uttered in Parliament. He concluded that the Parliamentary Committee had found, after a thorough investigation over several months, that Laauli was guilty of misleading Parliament, and going against ethical principles expected of Parliamentarians.

Nafoitoa in his oratory eloquence, then recommended that Laaulialemalietoa be suspended from Parliament for 3 months, with all his Parliamentary privileges removed for the same period time.

Two further amendments to the Committees recommendation were made. The Deptuty Prime Minister spoke of mitigating factors and proposed that Laauli be let off with a warning. This was seconded by Hon Gatoloai Amataga Gidlow.

The Minister  of Agriculture proposed that Laauli be suspended for 1 month instead of three. This was seconded by Afamasaga Rico Tupai.

Several MPs from Savaii, representing the Usoga of the Puleono stood in support of Laauli, however, most took the opportunity to express disappointment in Laauli’s language during debates with the Prime Minister.

However while Parliament was still debating the Committee’s report, Laauli stood and apologised, to the Prime Minister, the Speaker of the House, to his Constituent, family and Samoa.

Laauli walked of Parliament having given his verbal resignation.

To Tender, Re-Tender and then Tender Again

In April this year, the Chief Executive Officer for the Ministry of Finance Leasiosio Oscar Malielegaoi told Samoa Global News that two local and one overseas company submitted bids for the supply of a generator for Tanumalala, at the close of tenders on the 10th of February 2020.  This information was in direct conflict with the information received from the Chair of the Parliamentary Finance and Expenditure Committee, Aliimalemanu Alofa Tuuau.

Leasiosio said at the time, that bids were currently being assessed by an Evaluation Committee comprising a representative each from the Ministry of Works, Office of the Attorney General, the Ministry of Finance and Prisons & Corrections.

It was the Third Tender

In relation to her response in Parliament that the Finance and Expenditure Committee had already sighted three quotes way back in December 2019, Samoa Global News sought clarification from Aliimalemanu Alofa Tuuau.

The Chair of the Finance and Expenditure Committee said the tender process had been carried out three times for the prison generator and what Leasiosio had referred to, was the third tender.

She added that the $300,000 tala budget was based on the amounts that companies had submitted in earlier tenders.

“Three quotes were received the first time however the requirements were not met such as a view from EPC. Advice was given to retender and to involve EPC”.

“When that second tender closed, only one company had submitted a bid, however it was received by the Prisons management after the due date. So further advice was given to retender again”, explained Aliimalemanu.

Where to From Here?

In response to questions from Samoa Global News, Faimalo Mathew Lemisio says that by motion of Parliament, Laauli would need to submit a written resignation as required by the Constitution and the Electoral Act 2019.

“Once we receive a warrant form the Speaker instructing us to proceed with a by election, then there will be one”.