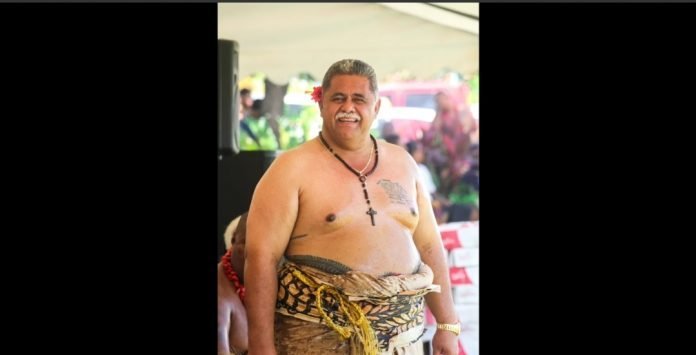 The preliminary results of the Gagaifomauga No3 by-election held today indicates a landslide win for Laaulialemalietoa Leauatea Poltaivao Schmidt, who makes history as the first Member of Parliament for the newly established Faatuatua i Le Atua Samoa ua Tasi (FAST) political party.

The Office of the Electoral Commissioner ran an effective by-election with preliminary results being posted live on their facebook page within an hour and a half of booths closing.

The leader of the FAST party secured 691 votes from the 4 village booths, while his opponent Faaulusau Simi Laulua received only 205.

Laauli Leuatea Polataivao Schmidt was first elected to the Fono in the March 2006 elections.  He was successful again in 2011 and became the Speaker of the House from 2011-2016.  He returned in 2016 and became the Minister of Agriculture.

Laauli is the son of the late Polataivao Fosi Schmidt affectionately known as “King Pola”. Laauli’s late father was a founding member of HRPP and a Member of Parliament for Gagaifomauga No3 for 35 years from 1964-1999 and served as a Minister of Health, a Minister of Labour, and a Minister of Lands and Environment.

Laauli left the Human Rights Protection Party after tensions arose for his non-conforming approach to party lines on issues he says, are important to his constituency.

Here is a brief timeline of services to the Samoan people and Government under the HRPP;

Laauli’s new political party have launched a social media campaign and have outlined the FAST Principles as:

FAST PRINCIPLES
The principles of our party are based on our belief in the democratic processes and that those in Government and in Parliament and in the Judiciary are there for no other reason than to serve the people of this country. Therefore our principles that we have based this party on are:

(a) All political authority come from the people of Samoa by democratic means, including regular and free elections;

(b) All assets and resources under the Government control or authority belong to the people of Samoa, and should be managed for the benefit of all, including future generations;

(c) All Samoan citizens are entitled to dignity, self-respect and free practice of their customs and culture;

(d) All Samoan citizens are entitled to the protection of their human rights recognised in the Constitution of Samoa, and

(e) All branches of Government must always act with the understanding that they must be accountable for any actions to the people of Samoa.