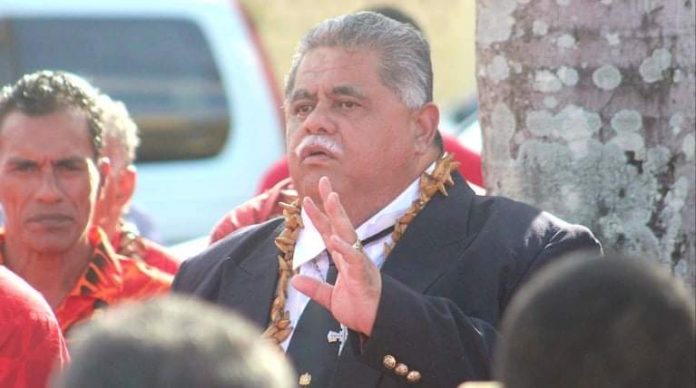 15 May 2021, Mulinuu Courthouse, Apia Samoa. A group of over 100 protestors braved the hot sun for eight hours last Friday as they awaited the Court hearing for the FAST challenge against a writ issued by the Head of State revoking the results of a recent general election and calling the nation back to the polls this Friday.

Coordinated by Samoa Solidarity International Group (SSIG) the group of mostly women with young children, sat from 8am to 4pm last Friday, and will no doubt be there again this morning. This time to await two historical decisions awaited with eager anticipation by the entire population of Samoans in-country, as well as hundreds of thousands who live abroad.

One decision to be delivered at 12pm sets out the Court’s interpretation of a constitutional amendment made in 2013 to ensure women are represented in Parliament by a ratio of 10%. A decision crucial since the late addition of Aliimalemanu Alofa Tuuau gave HRPP an equalizing 26th seat on the eve of Independent Member Tuala Iosefo Ponifasio announcing his move to FAST, which would have given the Hon Fiame Naomi led party the 26th member needed to call the April 9th General Elections.

The second decision Samoa awaits in  today shall determine if Samoa’s Head of State who is elected by Parliamentarians every 5 years, had the power to revoke official results of the country’s 9th April General Elections, and call fresh elections for this Friday 21st May 2021.

Last Friday FAST Deputy Leader Laaulialemalietoa Leuatea Polataivao, together with their counsels Latu Lawyers, took the time to speak with the SSIG-led protestors when Court finally adjourned at 4pm Friday afternoon, after a full day hearing.

Laauli called for peace and reminded protestors that Samoa was a nation founded on God, and victories are sought with humility.

Laauli called for calm, and reminded the group that being strong and courageous is not to seek victory with pride and high-mindedness, but as the cultural saying goes, victories are won by taking forth a battle of humility.

“Pray to God, and be reminded of what our forefathers did on this land at Mulinuu..they lay rested close by to this place, those who fought for our independence.. but be strong and courageous, God is alive and will not forsake you,” said Laaulialemalietoa.

Laaulialemalietoa told the SSIG group that they may have differing views on some issues, but the common goal with respect to the FAST Court challenges which they have been seen supporting, is to do what is best for Samoa.

One elderly lady told Samoa Global News they are outside Court playing the sacred traditional role in Samoan customs of waiting and praying while a battle was being fought.