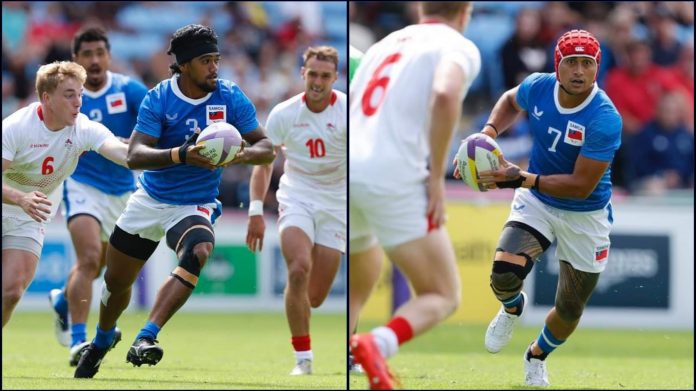 Manu Samoa 7s have finished Day 1 of the Los Angeles 7s undefeated and are through to the quarter finals after a convincing 31-5 win over England in their third pool match of the day.

The Manu Samoa came out firing and almost put Vaafauese Apelu over the line in the first minute of the match but the TMO declared him held up.

Seconds later a quick ball from the smallest man in the squad, Neueli Leitufia to Uaina Sione put the power forward over for Samoa’s first try.

Samoa remained at 7-0 for another three minutes, maintaining all of the possession – until Uaina Sione makes a brilliant break to set up Vaovasa Afa-Sua with space to cross over for Samoa’s second try.

Another conversion from Co-Captain Melani Matavao and Samoa is leading 14-0.

The third try went to Uaina Sione who pulled a huge side step to confuse the English defense. He stormed towards the tryline and  beat two more defenders before scoring Samoa’s third.

The Men in Blue went to the break with a 19-0 lead. With all of the possession, they didn’t have to make a single tackle in the first half.

England come back in the second half to launch an attack for the first time in the match.

A goose step by an English player swayed the Samoa defense and Tom Bowen went over to bring the score to 19-5.

Melani Matavao goes up to secure the ball off the kick-off, but is bumped by an English defender in the air and the referee handed them a yellow card.

With three and a half minutes to go, Owen Niue, who had come off the bench, makes a line break and smiles all the way to the tryline to put Samoa safely at a 26-5 lead.

With just seconds left on the clock, a clean lineout ball to Melani Matavao inside the English 22 saw the veteran cut through the English defense and make a 50 metre dash down the field.

An offload to Motu Opetai in support play placed the young replacement forward into space to score the final try for Samoa.

England has not been able to beat Samoa this whole season. In Singapore, Samoa beat England 31-5. In Toulouse, Samoa won 26-24 and at the Commonwealth Games, Samoa left England tryless with a win of 34-0.

Samoa will meet Argentina in the quarterfinal on Day 2.

The Manu Samoa 7s team is well supported in Los Angeles by a strong Samoan community in the grandstands.