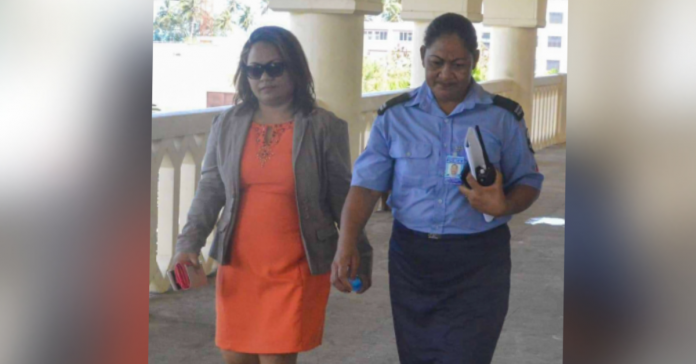 The former partner of Kolani Junior Lam took the stand today as a witness for defence in the murder trial relating to the death of Sa’u Justina Sa’u.

The former UTOS CEO died tragically on Sunday 21st October 2018. Her husband and father of two of her children is on trial for her alleged murder. Kolani Junior Lam vehemently denies the accusations, claiming in his testimony last week that he had found Justina hanging from a rope under a cinema tree in their backyard at Sinamoga.

Aiva Toa Kalati had four children with Kolani – twin boys and two daughters. They had lived together as husband and wife for 11 years, although the Court heard that they had never legally married. Avia now has another partner and they have been married for a little over a year.

In her chief evidence, 32 year old Aiva Kalati told the Court that the defendant was a good man who had never abused her during their 11 years together. She testified that as a couple, they never fought infront of their children.

“Kolani’s voice sounds demanding when he wants something but it is just the way he is, but he is loving.”

However during cross examination prosecutor Leone Su’a-Mailo asked Aiva again, if in fact, she had never been assaulted by Kolani.

“Did you know that Kolani told the Court that he did hit Justina?”

“Are you saying that in 11 years, Kolani never hit you ever?”

Kolani Lam’s former partner then changed her evidence saying that there was a time when Kolani did slap her across the face.

During cross examination Aiva was asked about her visits to Kolani and Justina’s home in Sinamoga and whether she knew that Justina was paying for her children’s school fees.

Aiva did not deny what was put to her by prosecution saying that she was grateful to Justina for the role she had played in the lives of her and Kolani’s children.

Prosecution also questioned Aiva about her evidence of the time she and Kolani had parted ways as a couple.

Kolani’s evidence is that they had separated in 2014 however Aiva told the Court that although she had gone overseas seeking a better future for her children, they did not split up until she returned to Samoa in August 2015.

Defence witnesses will continue tomorrow in the Supreme Court of Samoa, in a trial that is now in its third week before Justice Mata Tuatagaloa.