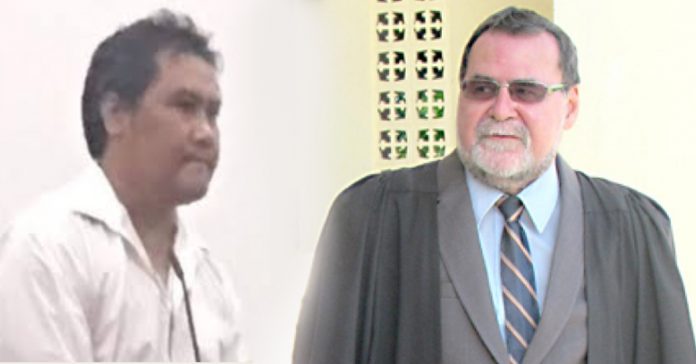 14 June 2019, Apia Samoa. Kolani Junior Lam who faces murder charges in relation to the death of his wife and former UTOS CEO Sau Justina Sau has had a second application for bail denied by the Supreme Court.

Prosecution once again opposed the application on the grounds that the defendant has interefered with police witnesses.

According to prosecution, Lam had sent the witness a letter containing cash to try and influence her statement.

“This shows a real significant risk that the defendant will interfere with police
witnesses,” said Sua-Mailo.

Justice Vui questioned defense counsel on whether there were any new circumstances before the court for the bail application to be heard again.

Leiataualesa confirmed that there was no new information, but do apply to appeal the decision by former Chief Justice Patu to deny bail to his client.

Defense counsel also told the Court that prosecution had promised his client a trial date in February however, when the application for bail was denied the trial was set to June which was
two months later than the original date promised to his client.

Prosecution explained that delays were due to the application by defense to appeal the Court’s decision to deny bail.

“It was because of his appeal to the decision that further delayed the matter,” said Sua-Mailo.

“The decision by former Chief Justice was delieved on the 29th of March and the Court of Appeal was not until April;

“Your honour he had more time to appeal the decision however, when he filed his appeal it was out of date and therefore the appeal will not
be heard until September.”

Leiataualesa told the Court his client
and his family needed time to go through the decision and decide whether to appeal or not.

At 2pm yesterday afternoon Justice Nelson delivered his decisoon to once again deny bail to Kolani Junior Lam, and adjourned to 10am this morning stating that there are some matters that he needed to consider.

Outside of the Supreme Court, Malele Atofu Paulo also known as King Faipopo was seen at the Court house.  Asked why he was there, Paulo told Samoa Global News that he was there to support Kolani Lam.

“I’m here to listen to Kolani’s case if he is granted bail or not.”