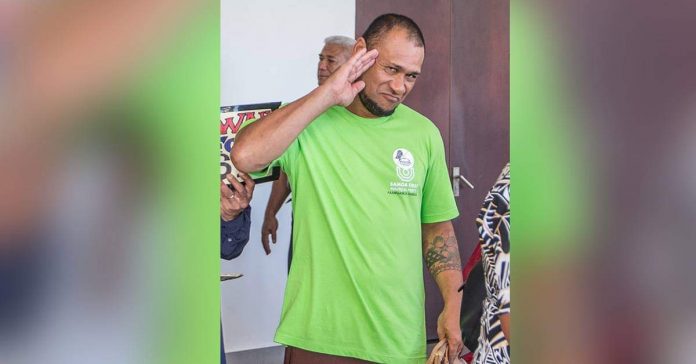 King Faipopo published information on social media accusing Prime Minister Tuilaepa Sailele Malielegaoi of importing firearms in a container as well as writing a letter to a former minister, Toi Aukuso, in relation to the assassination of a former Cabinet Minister Luagalau Levaula Kamu.

The accusations have been strongly denied by Prime Minister Tuilaepa Sailele Malielegaoi, who has since challenged King Faipopo to “bring your witnesses”.

District Court Judge, Leota Raymond Schuster has set the trial for the 19th of June 2019.

Defense counsel Unasa Iuni Sapolu made an application for variations to the bail conditions, and requested the Courts indulgence to allow her client to travel to Australia and return on the day of the trial.

Judge Schuster has set next week the 18th of March to hear variations to bail conditions and reminded defense counsel that on the day of the hearing she would need to present an itinerary of return flights already paid for and sureties as bond that he would return for the trial in June.

Outside Court, Lupematasila told the media that part of Malele Paulo’s bail condition is to sign at the Apia Police Station every Friday and to leave the country to await his trial would require a cash bond.

Asked how much bond the Court would be looking at Lupematasila said they have to consider the penalties as well as the charges.

“We have to come up with an amount that is fair, so that if he does not return, the amount of money covers the charges that he escaped from;

“For everyone who wants to leave the jurisdiction they have to file an application and how much they pay all depends on the penalty of the offense,” she said.

“So how it works is that he has to give us two names of people who live here as well as their bank account so when he leaves and does not come back the people here will have to pay the amount of money that was ordered by the Court for his bond,” explained Lupematasila.