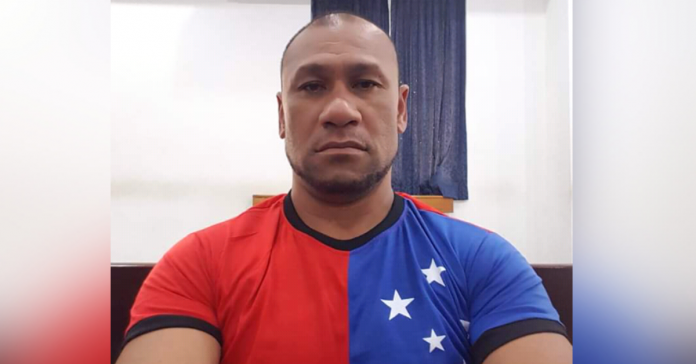 Malele Atofu Paulo also known as King Faipopo on social media entered a not guilty plea before Distrct Court Judge Alalatoa Rosella Papalii on the new charge in connection to a Facebook status he posted on the 17th of May towards Prime Minister Tuilaepa Sailele Malielegaoi.

Prosecutor Lupematasila Iliganoa Atoa told the media outside the court room that Malele is being charged uder the Telecommunication Act for using electronic systems to harrass people.

“The new charge is a telecommunication offense with the penalty of $5,000 fine, for using electronic means to cause irritation, annoyance and harassment towards a person,” she said

On the 17th of May Malele posted a photo of himself inside one of the court rooms at Mulinuu with a status calling the Samoa Prime Minister a coward, a liar, and a murderer.

The status which is still up on Malele Paulo’s Facebook page has been shared over 60 times on social media and attracted over 100 public comments by King Faipopo’s fb friends.

“I was quite clear when the bail condition was set earlier and the condition was, you are not allowed to post anymore adverse posting on social media,” said Judge Alalatoa.

She added that the defendant can post anything he wants however he is to refrain from adverse posting towards the Prime Minister, or anyone else.

Outside of the courtroom defense counsel Unasa Iuni Sapolu handed out a written statement to all media present.

In the statement Unasa questions the independence of the Samoa Police in handling the Malele Paulo case.

“Are the Police more vigilant in pursuing a criminal prosecution when the complainant is; the Prime Minister of the country, the Minister of Police.

“We will look at the criminal investigation to see if it is tainted given the complainant is the Minister of Police and he is in control of the investigation. It is a conflict of interest.”

Unasa says that Malele Paulo’s case is a test of whether Samoa is a democracy, claiming that King Faipopo’s freedom of speech has been supressed.

The statement claims that King Faipopo is a principled person who believes in freedom of speech.

“He is willing to be persecuted by the government, to demonstrate the sacrifice one ought to make to help society exercise their freedoms and rights,” said Unasa.

Last week defense claimed that the Samoa court had no jurisdiction to hear the criminal charges against Malele Paulo because the statements were made while he was in Australia and not in Samoa.

Judge Alalatoa rejected the application by Unasa to exclude the criminal proceedings and yesterday set the hearing to begin on the 22nd of July 2019.