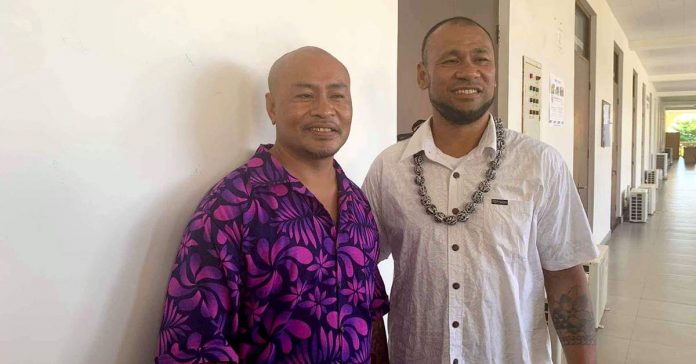 Paulo and Pauga, both represented by lawyer Unasa Iuni Sapolu did not enter pleas against charges laid against them.

“Your honour I’m going to make a remand without plea to next week simply because despite the fact the defense wrote to the prosecution on the 15th of February for the information I have as of today just received 13 information against my client and I need to go through with my client and receive instructions on charges,” said Unasa.

“I will need a bit of time to advise my client and to receive his instructions to what is sufficient.”

Judge Fepuela’i granted the application by defense counsel and adjourned the matter to the 12th of March.

Last month the Ministry of Police issued a statement in regards to the arrest of King Faipopo.

“A 45 year old New Zealand citizen has been charged “pursuant to section 117A of the Crimes Act, with making False Statements with the intention of causing harm to a member of our Samoan communities’ reputation, by defaming them,” said the statement.

The Samoa Police have said that this is a case of cyber bullying and the complainant, Hon Tuilaepa Sailele is calling on King Faipopo to bring

Outside Court this morning an irate Malele Paulo was consoled by his family and supporters as he was heard saying, “I aint not afraid of any human being, I only afraid of one God.”

Talalelei Pauga faces one charge of giving false information on his arrival declaration form when he returned to Samoa.

“I also appear for this defendant and I just received one information and also need time to discuss the charge against my client,” said Unasa.

Pauga’s matter has also been adjourned to the 12th of March.