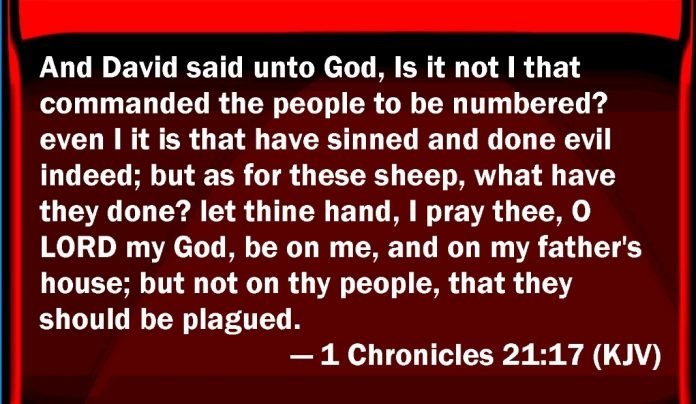 From Daily Inspiration for Leaders by John C Maxwell.

Times of failure not only reveal a leader’s true character, but also present opportunities for significant leadership lessons.

Following a major victory over the Phillistines, King David made a major mistake. The king chose to listen to Satan, stopped trusting God for the defence of his nation, and undertook a census.

David’s willingness to take responsibility for his foolish action demonstrated his depth of character. He repented and accepted punishment from the hand of God, trusting in the grace of God. Even so David’s error led to the deaths of seventy thousand Israelites. When leaders mess up, many people suffer.

Many leaders attempt to hide failures, blame others, or run from God. But David admitted his failure and repented. Although he faced many difficulties, David worked to restore his relationship with God and did whatever he could to minimise the consequences of his failure in the lives of others.

Heavenly Father, help us to be good leaders and own up to our mistakes in the places you have called us to lead – as parents in our homes, matai in our villages, deacons in our churches and positions of power and influence in our workplaces. Amen.