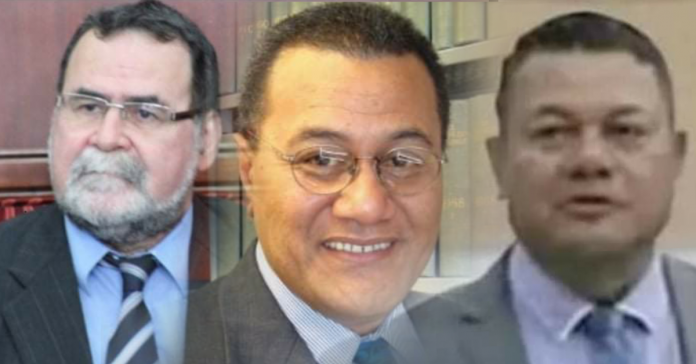 Faumuina had first voiced his dissappointment by posting on social media immediately after the announcement was made on the same night Samoa was preparing for the State of Emergency lockdown on Friday 20th March.

“It is unbelievable that Vui didn’t get the CJ job”, said the MP for Urban West, a constituency with over four thousand registered voters.

“The PM to not recommend him is beyond my imagination”.

“I have known him as one of the most honest lawyers and best judges in Samoa”, he added.

Faumuina Leatinuu says Vui now 65, has worked in Samoa his entire life and deserves to be given the role.

“Vui has worked really hard, and has spent all his life here in Samoa to uphold the law and the constitution of the land. His loyalty can’t be questioned”.

Justice Nelson was awarded a New Zealand government scholarship in 1971 after graduating as 2nd Dux from St Joseph’s College. This took him to Timaru Boys High for 7th form, and onto the University of Canterbury where he was awarded a Bachelor of Laws. Justice Nelson returned to Samoa in 1979 and joined the Office of the Attorney General where he worked until 1984. Vui worked as a lawyer and partner for Stevenson, Nelson and Mitchell Lawyers until he became a District Court Judge in 2000. He became a Senior District Court Judge in 2001, and led the lower Courts until his appointment to the Supreme Court of Samoa in 2006.

Justice Vui is well known for his role on the UN Committee on the Rights of the Child, both as a Member and Deputy Chair.  Samoa hosted the Committee’s Extraordinary 84th Session at Taumeasina Island Resort earlier this year, a historical first time such a session had been held outside of Geneva.

Faumuina says he has nothing against Satui Simative Perese and wishes him all the best in his new role.

A senior practicing lawyer in Samoa who did not wish to be named told SGN that the decision was a kick in the face for Samoa.

“We have a highly experienced judiciary, and any one of them could have taken up this important role. To have someone come from New Zealand who hasn’t served in Samoa is both sad and dissappointing. If I were a Supreme Court Justice, I’d resign.”

Satiu Simative I Perese was announced as having been appointed Chief Justice under Article 65(2) of Samoa’s Constitution which states:

“The Chief Justice of the Supreme Court shall be appointed by the Head of State, acting on the advice of the Prime Minister”.

Said the government media announcement, “He has 30 years of experience as a lawyer that began in 1990 in the Crown Law Office in Wellington, New Zealand. He later on moved to Auckland to become the Staff Solicitor and then Associate in 1993. He is a barrister sole to date.”

Prime Minister Tuileape appointed Justice Vui Clarence Nelson as Acting Chief Justice upon the retirement of Patu Tiavasue Sapolu in April 2019.  He told the media at the time that Justic Vui would oversee the Samoa judiciary, as he needed to seek and await the promptings of the Holy Spirit for the right person to fill the role.