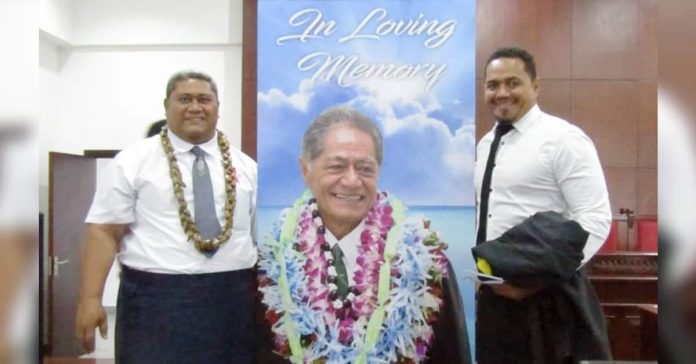 “A man of few words, but a calming influence during times of turbulence and stress”

The Supreme Court of Samoa held a special sitting this morning in remembrance of Justice Vaepule Alo Vaemoa Vaai, who passed away in New Zealand last week having lost his battle with cancer.

The service was live streamed on the Facebook page of the Ministry of Justice and Courts Administration, for families and friends and Justice Vaai’s wife Letuimanu’asina Dr Emma Kruse-Vaai, watching from New Zealand.

Long serving academic Dr Letuimanuasina had resigned her post as the Chief Executive Officer of the Samoa Qualifications Authority in November last year, to spend time with her husband and join him in New Zealand where he had traveled for treatment.

The service was led by Father Eteuati Lapa of the Our Lady of the Rosary Parish at Siusega where Justice Vaai had served as a parishioner.

He was promoted to the Supreme Court in 2016, where he had also presided over the Court of Appeal. He diligently served Samoa’s judiciary for 16 years, resigning only when it was time to travel to New Zealand for treatment last year.

Justice Vaepule Alo Vaemoa Vaai was a member of the Appeal Committe for Public Servants. He also was a Deputy President for the Lands and Titles Court.

Before joining the judiciary, Vaepule worked as a Public Servant with various government organisations. He served as Samoa’s Public Trustee from 2001 – 2004 and worked as a lawyer and Assistant Manager for the National Provident Fund from 1997 – 2004.

The President of the the Samoa Law Society Leiataualesa Komisi Koria said that Justice Vaai as he often heard people describe him, “was a man of few words, but a calming influence during times of turbulence and stress.”

Justice Vui Clarence Nelson, also a close friend of Justice Vaepule described him as a brother, a mentor, and a very dear friend for many years.

Holding back tears, the Supreme Court Justice paused for some time, before turning to address Letuimanuasina through the live feed…

Vui said one of the appiontments Vaepule had loved so much was being a Judge of the Lands and titles Court. Vui also stressed how Vaepule was always very proud of his Savaii roots…

Vui shared how much Justice Vaepule was sorely missed by everyone.

“Since his retirement from office, he has been missed by all, because…yes, Vaepule was a colleague, but to us he was more than that;

“He was a mentor to many of the young judges, a friend to all, and one who applied the law with common sense, even if the law says something else.”

Justice Vaepule Alo Vaemoa Vaai went to Vaisala Primary School and came from there to attend Leififi Intermediate. His parents took him to New Zealand and he attended Wellington College, graduating from Victoria University with a degree both a Bachelor of Laws as well as Bachelor of Commerce and Administration.

Vaepule had started as a lawyer, working alongside his brother Saleimoa Vaai and cousin Lesatele Rapi Vaai, who had also served as Supreme Court justice for Samoa.

Justice Vaepule is survived by his wife, five children and six grand childern.

Two of his children followed in his footsteps. Lawyers Masoe Saleimoa Charlie Vaai, and Lemauga Maureen Vaai both frequent the Mulinuu Courthouse as defense counsels, working in private law firms.