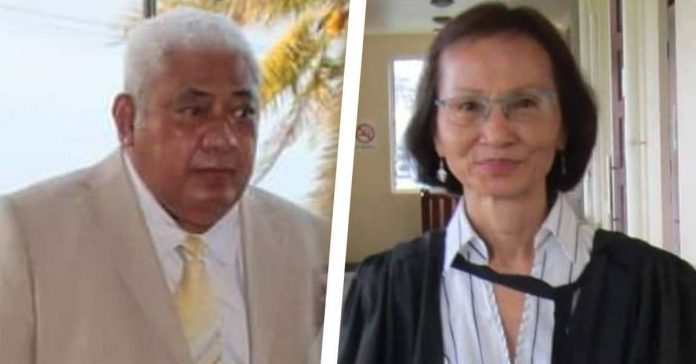 A Savaii-based business has been gravely impacted by a Supreme Court decision that took 22 years to be delivered by former Chief Justice Patu Tiavasue Falefatu Sapolu.

Atinae Vaai took out insurance cover in 1986 with National Pacific Insurance (NPI), for a building that belonged to a family business – Vaivaimuli Corporation, owned by Lesatele Rapi Vaai, his wife Tiresa and their children.

A dispute arose when Cyclone Ofa caused extensive damage to the insured building in Feburary 1990, and Vaai was told by NPI that cyclone damage was not included in the insurance policy for which they had been paying annual premiums at the time.

A two-day Court hearing was held before then Chief Justice Patu Tiavasue Falefatu Sapolu on the 29th-30th April 1997, however, he did not deliver the decision until the 26th of August 2019 – over 22 years later. In that decision, the Supreme Court ruled in favor of Vaivaimuli Corporation.

Counsel for Vaivaimuli Corporation, Ruby Drake of Drake & Co told Samoa Global News that that there has been no justice for her client, who has been unfairly impacted by the inefficiencies of the Court.

“I wrote to the Court every year for 22 years, asking for this decision; I just kept writing and writing..”, Mrs Drake said outside the Supreme Court yesterday.

Drake added that she also wrote to the Minister of Justice Faaolesa Katopau Ainuu, asking him to assist, and to direct the CJ if he could.

“I even suggested with respect, that the Chief Justice takes time out to write his decisions, and not take on any more cases,” said the senior member of the Bar.

On the missing Court file, Ruby Drake said that she was asked to resubmit all the information regarding the original claim.

This week before the Court of Appeal, NPI are appealing the decision on the grounds that, 1) the 22-year delayed decision is unsafe, 2) the Court file went missing in that period of time, and 3) judgement – that the judge did not analyse the evidence.

The appellate is represented by Counsel John Oswald Upton QC from New Zealand with Counsel Fiona Ey-Clarke as the local representative.

Yesterday during submissions to appeal, presiding judges zooming in via video link made comparisons to previous cases.

One presiding judge mentioned that breach of constitutional rights can be pursued against the Government, quoting the case of Punitia vs Tutuila 2014.

“In that case, $800,000 tala was awarded for breaching constitutional rights”.

Presiding judges also referred to a New Zealand District Court decision relating to delays resulting in the breach of a fair hearing.

According to Rugby Drake, there are several cases where decisions of the former Chief Justice were delivered before his retirement last year, however, the hearings dates were two decades ago.

“I have several other cases, where my clients will also be affected by these delays; there is no justice”.