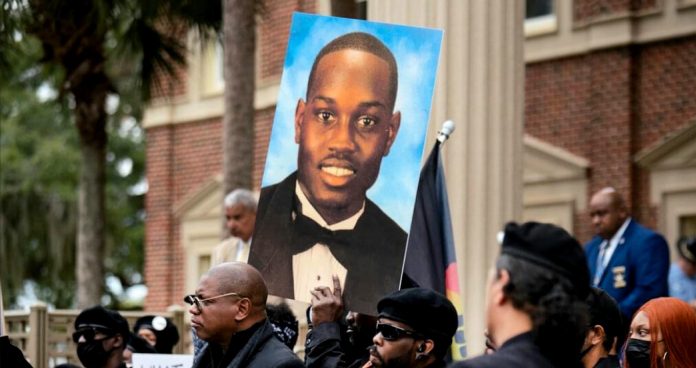 The jurors decided that the three men previously convicted of murdering Ahmaud Arbery were motivated by racism.

A jury on Tuesday found the three white Georgia men who murdered Ahmaud Arbery guilty of a federal hate crime, determining that they were motivated by racism when they chased the 25-year-old Black man through their neighborhood.

The case was one of the most high-profile hate crime trials in years, and came after a rash of acts of violence against African Americans, including Mr. Arbery and George Floyd, led to protests and soul-searching around the nation. It was seen as a victory for the Justice Department, which has pledged to make such cases a priority.

While legal analysts say that hate crimes are especially difficult to prove, federal prosecutors in the Georgia trial presented voluminous evidence of the defendants’ racist beliefs and crude language, leaving some jurors visibly shaken. It took them roughly four hours to reach a verdict. When it was read aloud in court, some jurors wept.

National civil rights leaders hailed the conviction as a victory for racial justice.

“As the nation continues to grapple with racially motivated violence by police and vigilantes who shroud themselves in self-appointed authority, the jury sent a powerful message: We see you for what you are, and we will not tolerate your deadly campaign of intimidation,” said Marc H. Morial, chief executive of the National Urban League. “This verdict draws a clear line in the sand.”

Mr. Arbery’s mother, Wanda Cooper-Jones, said she never doubted that the jury would find the defendants guilty, but her satisfaction was tempered with grief. 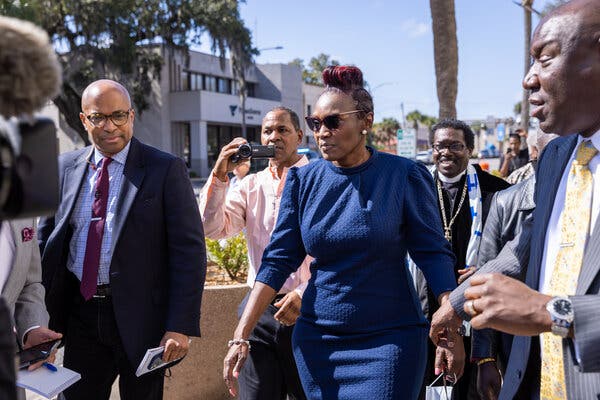 “As a mother I will never heal,” she said. “They gave us a small sense of victory, but we will never get victory because Ahmaud is dead.”

In addition to the hate crime convictions, the jury also found the three men — Travis McMichael, 36, his father, Gregory McMichael, 66, and their neighbor William Bryan, 52 — guilty of attempted kidnapping and found the McMichaels guilty of one count each of brandishing or discharging a firearm during a violent crime.

The men now face up to life in prison for the federal crimes, on top of the life sentences they received in state court this year after being convicted of Mr. Arbery’s murder, with only Mr. Bryan eligible for parole. The federal convictions ensure that the defendants will receive significant prison time even if their state convictions are overturned or their sentences reduced on appeal.

Most cases that local prosecutors and others ask the Justice Department to pursue do not end up this way. The department tends to be careful in selecting such cases, pursuing 17 percent of the hate crime incidents it was presented between 2005 and 2019. When the department does decide to prosecute, the cases usually end with defendants pleading guilty.

In this case, prosecutors had initially reached plea agreements with two of the defendants, Gregory and Travis McMichael, that would have sent them to federal prison for 30 years. But Mr. Arbery’s family protested the deals, in part because they would have allowed the men to serve their time in federal prison — viewed by some as less dangerous — rather than state prison.

Judge Lisa Godbey Wood ultimately rejected the agreements, allowing the trial to go forward. She has not yet sentenced the men in the trial that ended on Tuesday, and it was uncertain whether they would start serving their time in a state prison for the murders or in a federal prison for the hate crimes.

As a number of recent cases of violent crimes against African Americans have worked their way through the legal system, the Georgia case stood out for forcing a blunt examination of racism in the courtroom.

On Feb. 23, 2020, the three men used a pair of trucks to chase Mr. Arbery, who was running through their neighborhood, until the younger Mr. McMichael shot him three times at close range with a 12-gauge shotgun.

Over a week of testimony, federal jurors were exposed to ugly expressions of bigotry by the three men, and then asked to decide whether those attitudes meant they had gone after Mr. Arbery because of his “race and color.”

Lawyers for the three defendants argued that the men had not been motivated by racial animus, but rather because Mr. Arbery seemed to them like a potential crime suspect. Gregory McMichael’s lawyer, A.J. Balbo, told the jury that Mr. McMichael had not been out to hunt down a Black person that day, but rather to go after Mr. Arbery specifically, after a police officer showed him security camera images of Mr. Arbery entering a nearby house that was under construction.

Mr. Arbery had entered the house numerous times in the weeks before the shooting, including the moments before the chase began, though there is no evidence he stole or disturbed the property inside.

Twelve days before the shooting, Travis McMichael had also seen Mr. Arbery outside the house and had called 911, claiming he saw Mr. Arbery reach toward his waistband, a gesture, Mr. McMichael said, that made it seem like he could have been reaching for a gun.

Prosecuting hate crime cases is considered difficult because the government must prove not only that defendants harbor racist views but that their crimes were specifically motivated by bigotry.

In this case, evidence of the defendants’ racism proved to be both voluminous and harsh, including numerous uses of racist epithets and racial insults. The government’s case — with its video of Mr. Arbery gasping for his final breaths on the pavement and testimony that the defendants did not render aid to him — seemed to take an emotional toll on jurors, some of whom could be seen crying. Last week, one of the jurors asked court officials if counseling was available.

“At the end of the day, the evidence in this case will prove that if Ahmaud Arbery had been white, he would have gone for a jog, checked out a house under construction and been home in time for Sunday supper,” Bobbi Bernstein, a Justice Department lawyer, told the jury. “Instead he went out for a jog, and he ended up running for his life. Instead he ended up bleeding to death, alone and scared, in the middle of the street.”

After the verdict, one defense lawyer declined to comment and a second could not be reached. J. Pete Theodocion, the lawyer for Mr. Bryan, said he had been optimistic about his client’s chances. “We’ll have to respect the decision of the jury and move on from here,” he said.

The verdict was an important victory for the Justice Department. Attorney General Merrick B. Garland said at a news conference that “today’s verdict makes clear that the Justice Department will continue to use every resource at its disposal to confront unlawful acts of hate and to hold accountable those who perpetrate them.”

Brian Levin, a law professor and director of the Center for the Study of Hate & Extremism at California State University, San Bernardino, said the impact of the verdict would be felt “civically and culturally” more than anything.

“It sculpts the public’s recognition that when there’s a modern-day lynching,” the federal government “will address the civil and racial harms in addition to the state criminal harms, and that’s an important designation as we become more diverse,” Mr. Levin said.

Rashad Robinson, president of Color of Change, a racial justice organization, said the convictions for both the murder and the hate crimes underscored the importance of community outrage, an essential ingredient of social justice efforts. Prosecutors did not charge the men until May 2020, more than 10 weeks after Mr. Arbery’s death.

“The convictions on the state and federal levels would have never happened if there was not an uprising in Georgia when the local authorities tried to brush it under the rug,” Mr. Robinson said. “The fact of the matter is, it would not have happened without outrage.”

The death of Mr. Arbery was met with revulsion from both conservative and liberal lawmakers in Georgia. It prompted state legislators to significantly weaken a citizen’s arrest law that one local prosecutor had cited soon after the shooting to argue that the three men should not be arrested. It also prompted them to pass a state hate crime law. This month, the legislature also passed a resolution declaring Wednesday, the second anniversary of the killing, “Ahmaud Arbery Day.” Memorial events are planned in several Georgia cities.

As the verdicts were read aloud in court on Tuesday morning, Mr. Arbery’s parents and other family members lowered their heads, some praying. “Thank God,” said Marcus Arbery Sr., his father.

The only Black man on the jury, who also served as the foreman, wiped tears from his face as the verdict for each charge was read. The woman seated beside him also cried throughout Tuesday’s proceedings.

“Ahmaud will continue to rest in peace,” said Ms. Cooper-Jones, Mr. Arbery’s mother. “But he will now begin to rest in power.”

” I Cannot imagine the pain.” Attorney General welcomes the verdict in the Arbery case.

“Today’s verdict makes clear that the Justice Department will continue to use every resource at its disposal to confront unlawful acts of hate and to hold accountable those who perpetrate them,” Mr. Garland said on Tuesday in a news conference.

Last year, Mr. Garland said that the prevention of and response to hate crimes would be one of the “highest priorities” for the Justice Department. At the time, he noted an F.B.I. report for 2020 that showed a 6.1 percent increase in hate crime reports nationwide.

Before the trial, some experts said it might prove to be a difficult case for prosecutors, given the fact that no evidence would be introduced showing that the white defendants had used racist language directly targeting Mr. Arbery, a 25-year-old Black man. The case did, however, show several instances of the men expressing coarse racist ideas and slurs.

In his news conference, Mr. Garland noted that the Justice Department was founded during Reconstruction, when it was tasked with “bringing to justice those who used terror and violence to prevent Black Americans from exercising their civil rights.”

“The white supremacists who carried out those acts,” he continued, “assumed that they could operate outside the bounds of the law.”

Mr. Garland said that now, as in the past, “hate crimes have a singular impact because of the terror and fear that they inflict on entire communities.”

At one point, Mr. Garland appeared on the verge of tears as he discussed the case.

“I cannot imagine the pain that a mother feels to have her son run down and then gunned down while taking a jog on a public street,” he said.

“My heart goes out to her and to the family. That’s really all I can say about this.”