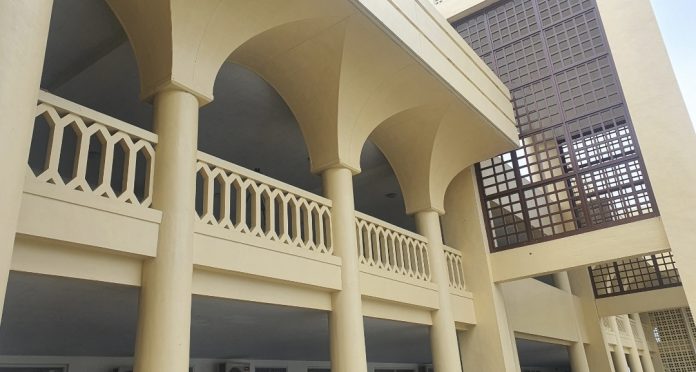 A candidate disqualified by the Supreme Court from competing in the upcoming by-elections has filed a motion for a Judicial Review of the decision handed down by Chief Justice Satiu Simativa Perese and Justice Niava Mata Tuatagaloa on Monday afternoon.

Tuitogamanaia Dr Peniamina Junior Leavai’s candidacy to run under the Human Rights Protection Party ticket for this week’s by-election was successfully challenged in Court by the only other registered candidate, Fuiono Tenina Crichton of the Faatuatua i Le Atua Samoa ua Tasi party.

Monday’s decision upheld the application by Fuiono Tenina Crichton, who asks the Court “to disqualify Tuitogamanaia so that he cannot contest the upcoming by-election”.

“We find that Tuitogamanaia Peniamina Junior Leavai has not rendered religious monotaga to EFKS church at Vaotupua Falealupo-tai for three consecutive years before lodgment date pursuant to section 8(1)(d) and section (5) of EA 2019,” states the decision.

Counsel for Tuitogamanaia, Aeau Leota Tima Leavai has confirmed a motion for Judicial Review of the decision was filed in the Courts on Tuesday morning, 23rd November 2021, to be considered on a pickwick basis before the polls open.

“We are seeking the Court’s relief to reinstate the decision of the Electoral Commissioner that registered Tuitogamanaia as a candidate,” said Aeau in response to questions.

“I can’t comment further at this point, but we are asking on the grounds that my client’s fundamental rights under the Constitution have been breached, his rights to religion, fair trial and the right to be treated equally before the law,” said Aeau.

The Office of the Electoral Commissioner had accepted the nomination of Human Rights Protection Party (HRPP) candidate, Tuitogamanaia Dr Peniamina Junior Leavai, and deemed he had satisfied the requirement of the religious monotaga, on the basis of the statutory declaration of Reverend Namaia Kofe Tuiletufuga of the EFKS church at Vaotuua Falealupo.

The decision found that in order to satisfy the religious monotaga requirement of the Electoral Act, a matai must have a registered matafale within their congregation, and that matafale must be listed under the matai’s own name. The decision rejects the argument and reality in many EFKS congregations in Samoa, where adult children, even those with matai titles, render religious service to the church through family matafale or matafale of their parents.

The Court found that by serving under this father’s matafale, Tuitogamanaia had not met the religious monotaga requirement because, “the contributions are made voluntarily for someone else, and to satisfy another purpose. In Tuitogamanaia’s case, those purposes are as Aeau’s son, and as a matai who supports Aeau.”

The Court in its decision also states that, village monotaga should be no different to religious monotaga. “A person’s compulsory service to the village is carried out under their own matai title and not under or through another’s matai title. We consider that this should be no different to the provision of service with respect to a religious monotaga”.

The Supreme Court Decision in full: 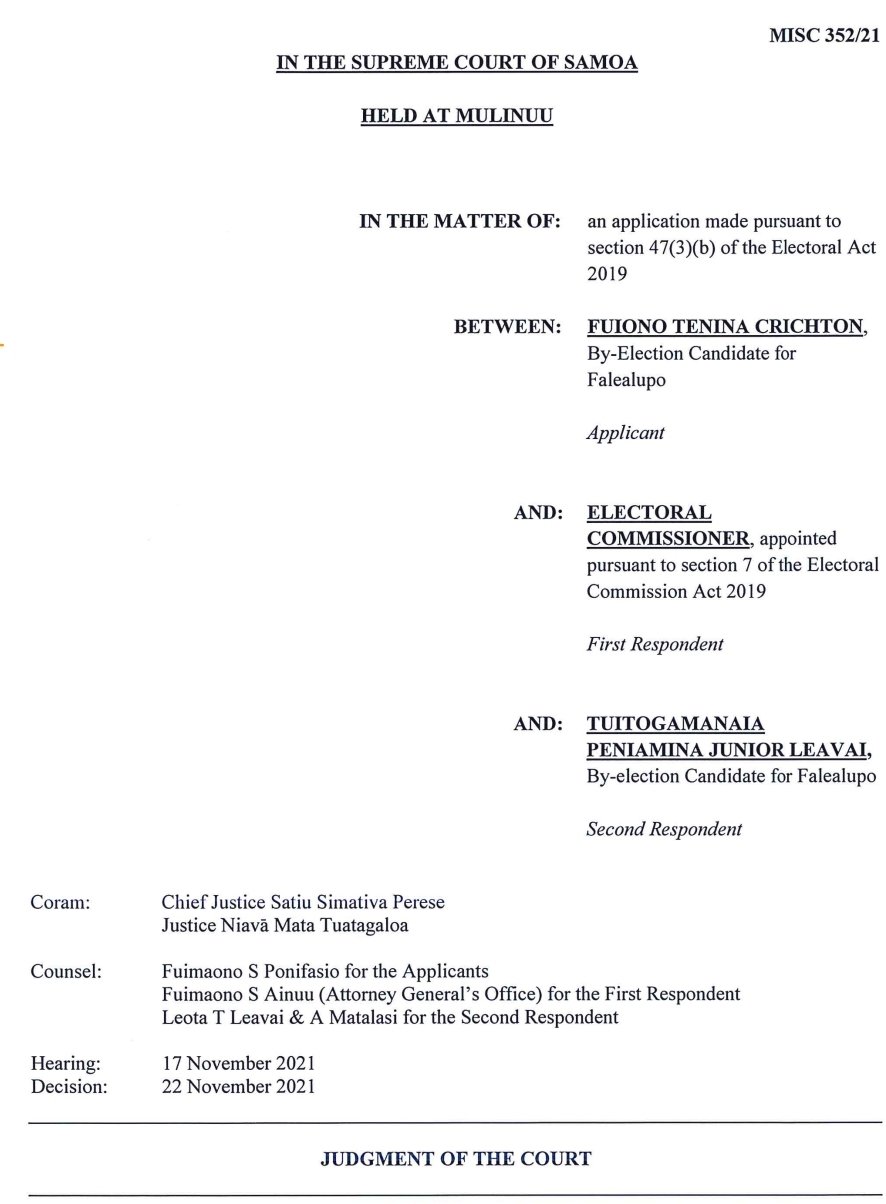 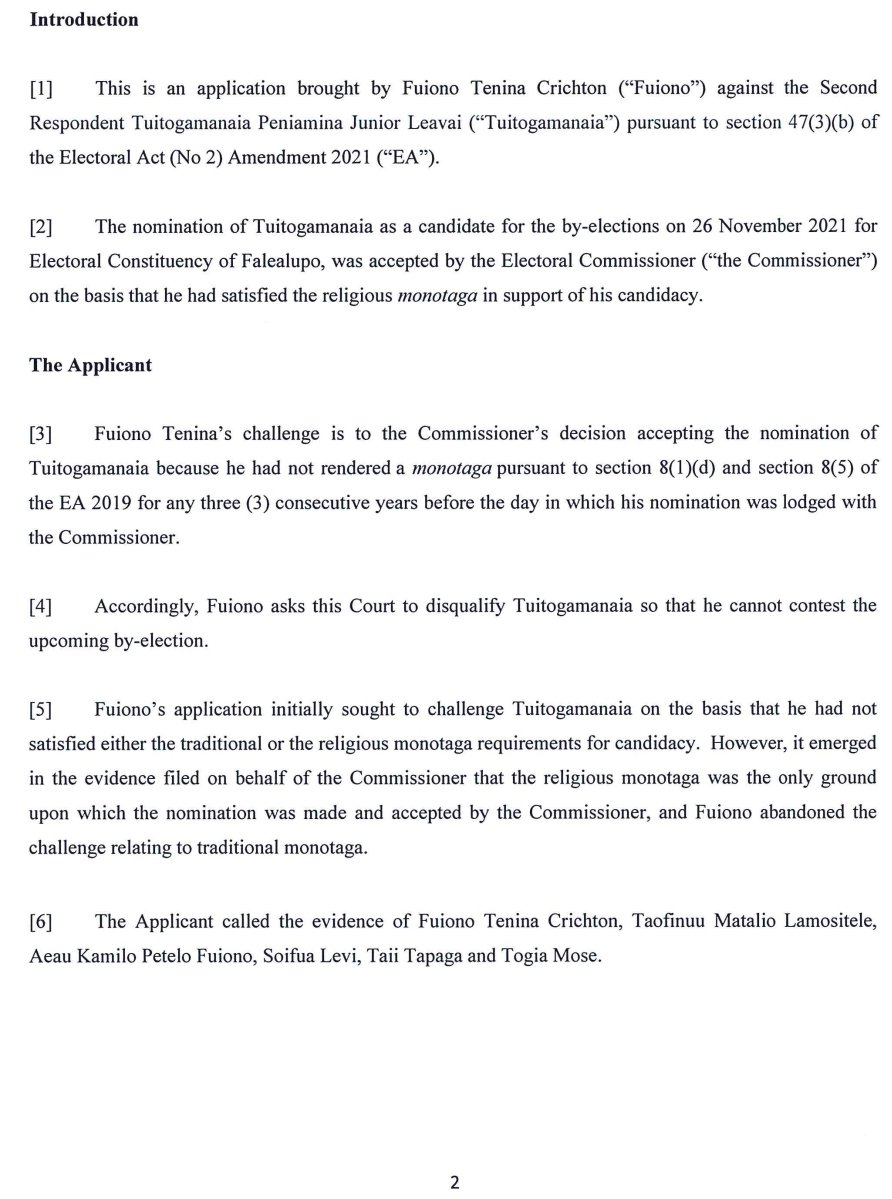 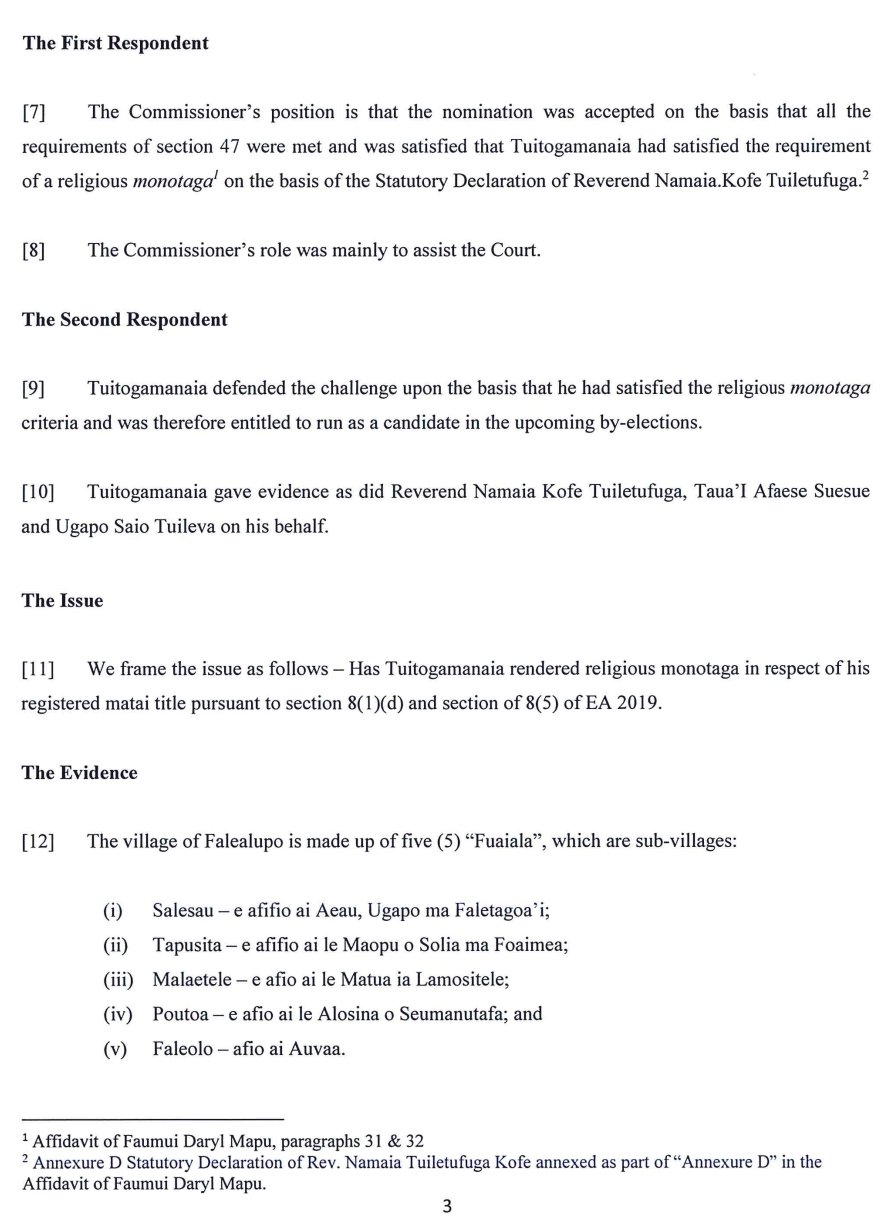 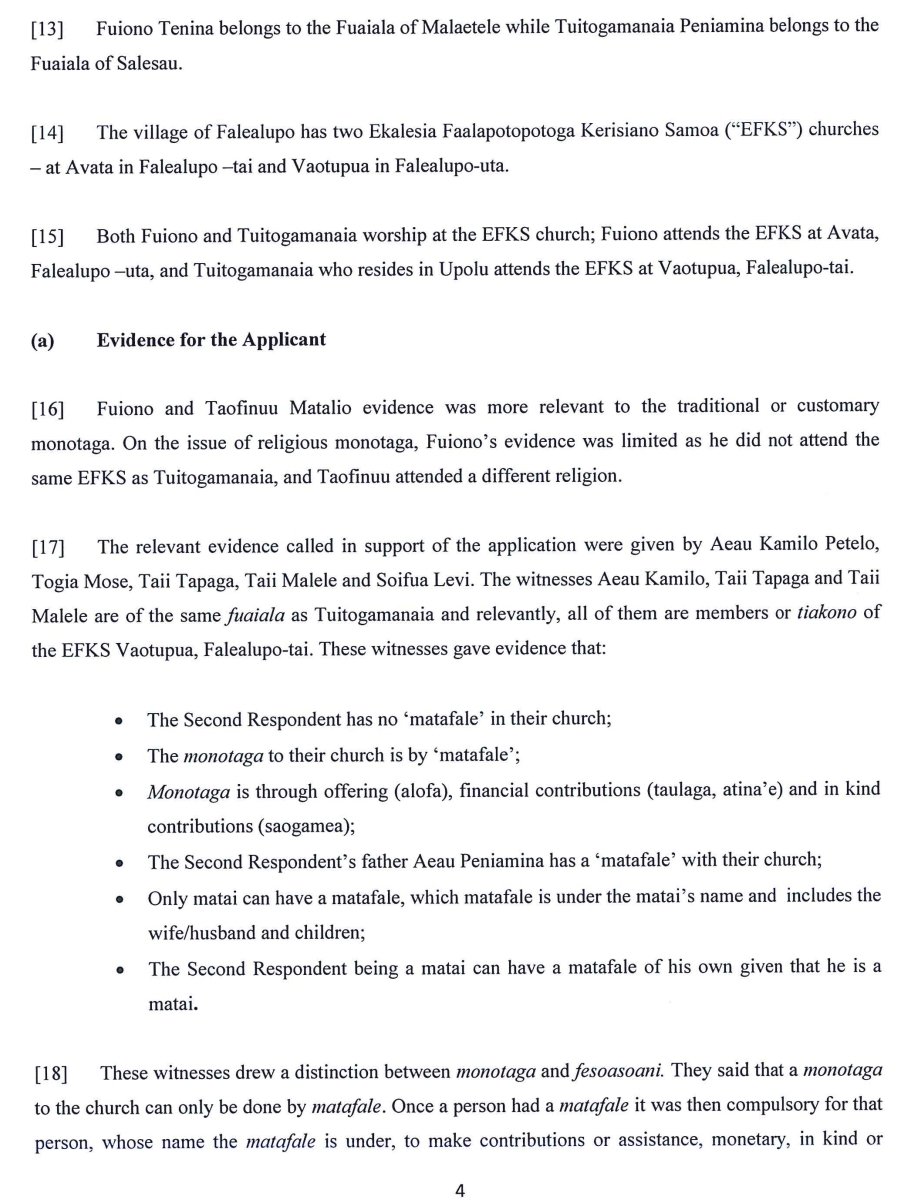 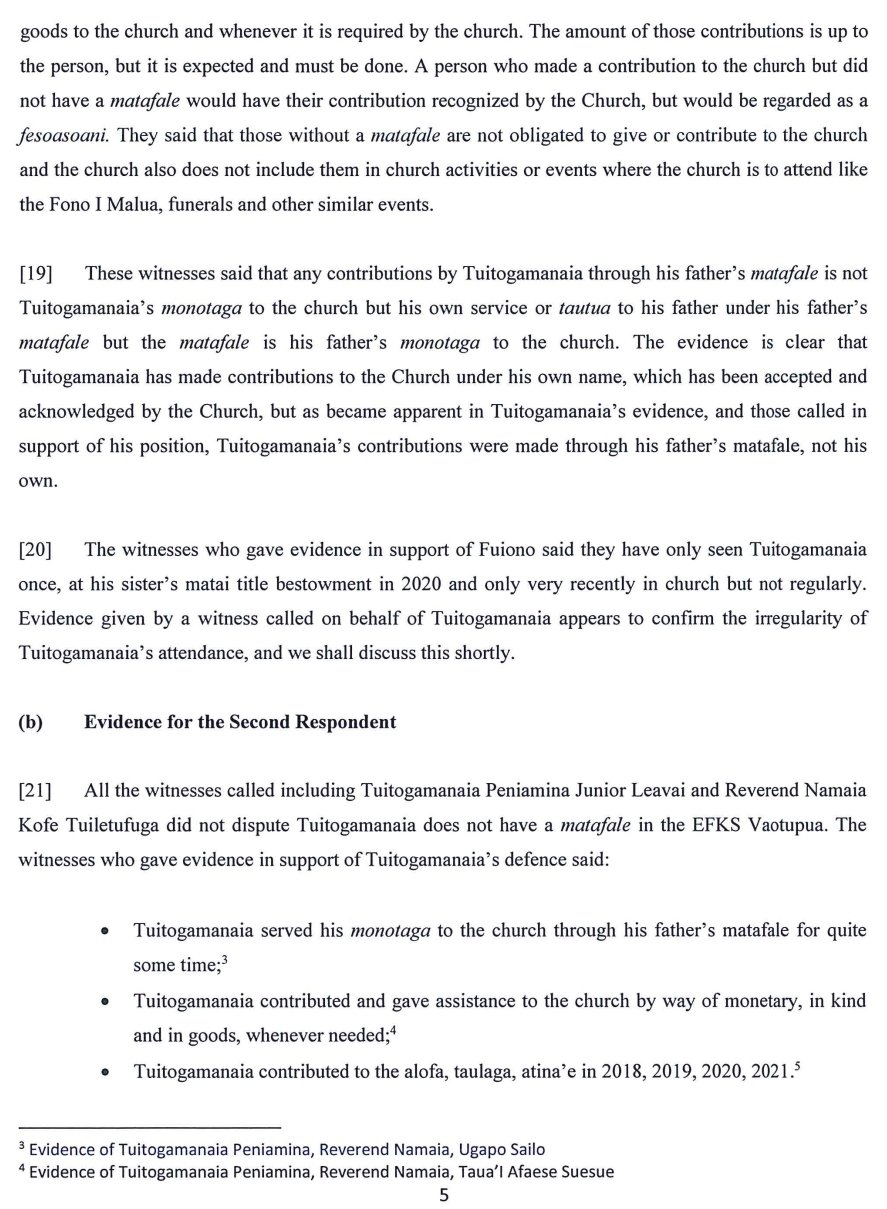 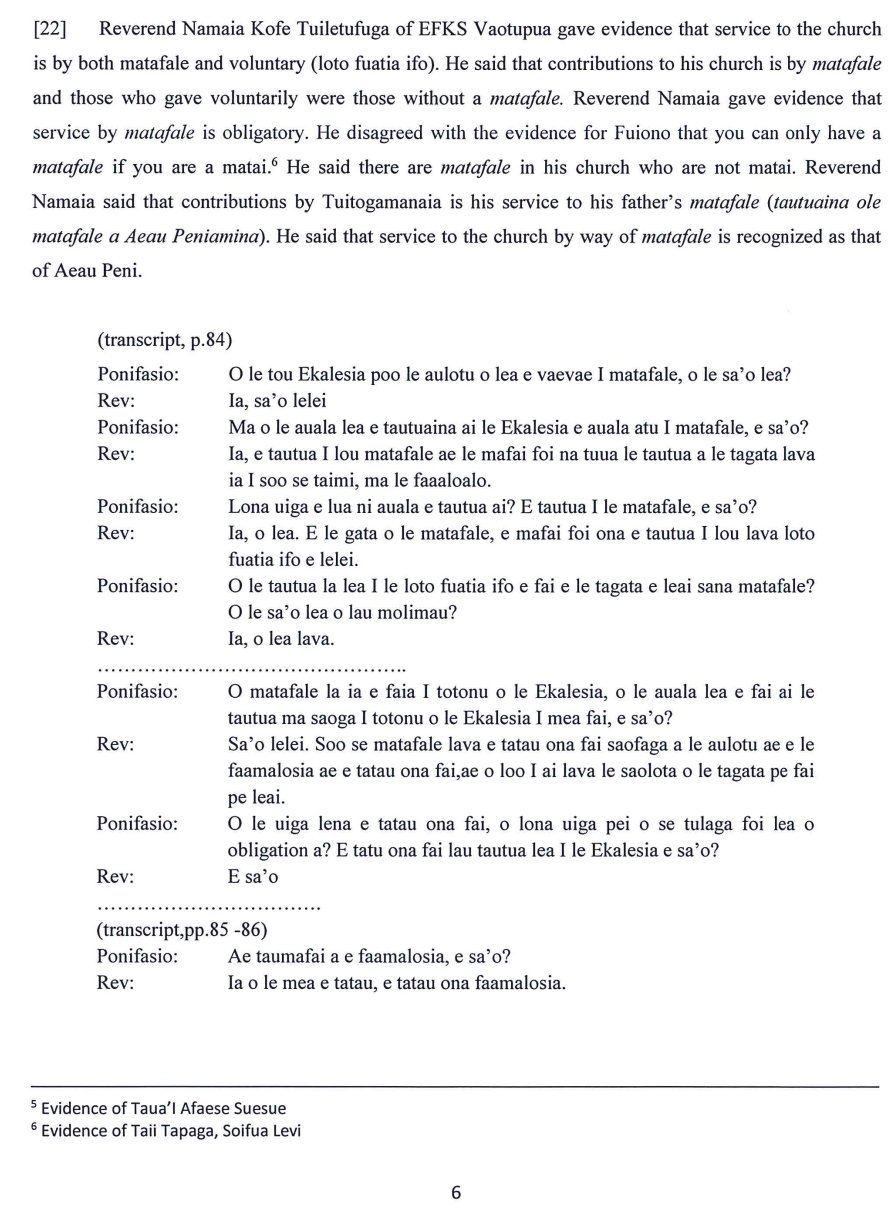 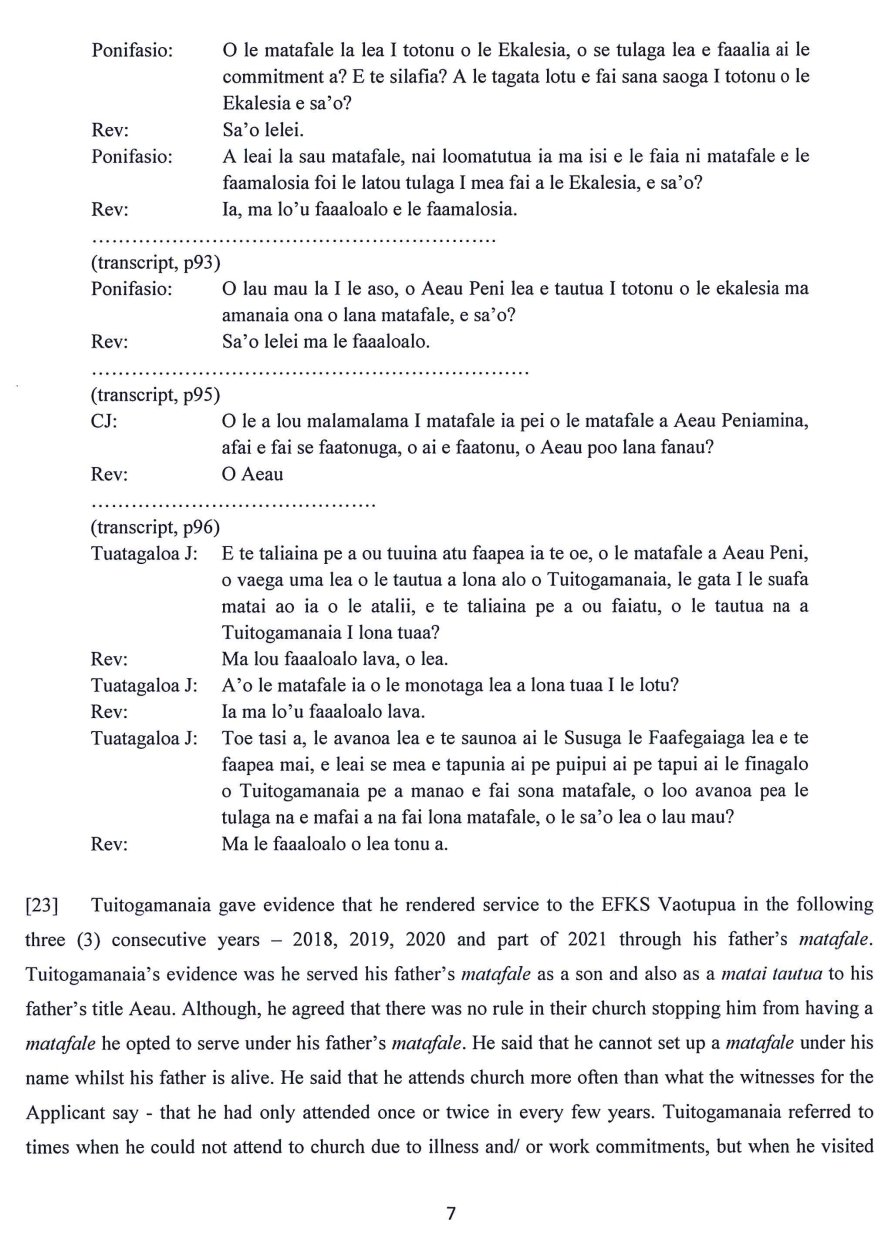 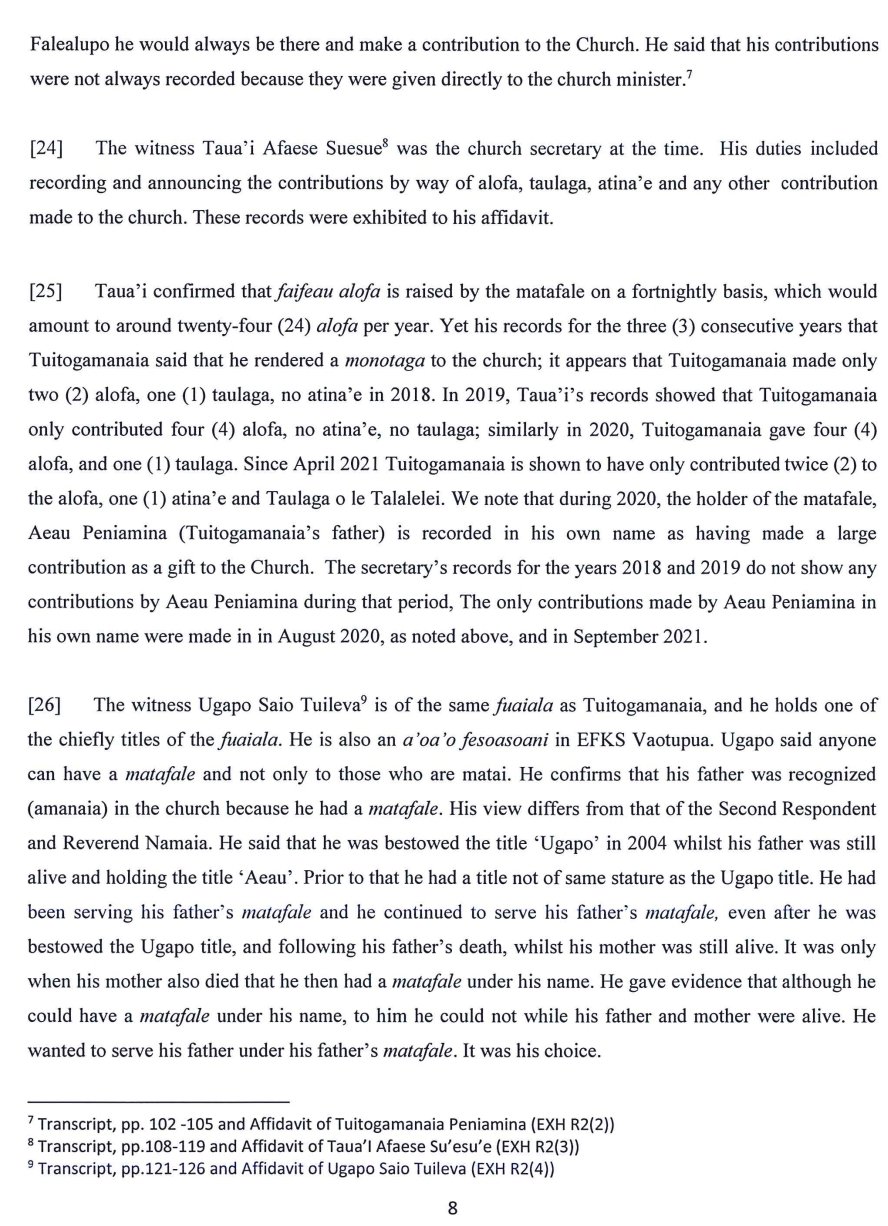 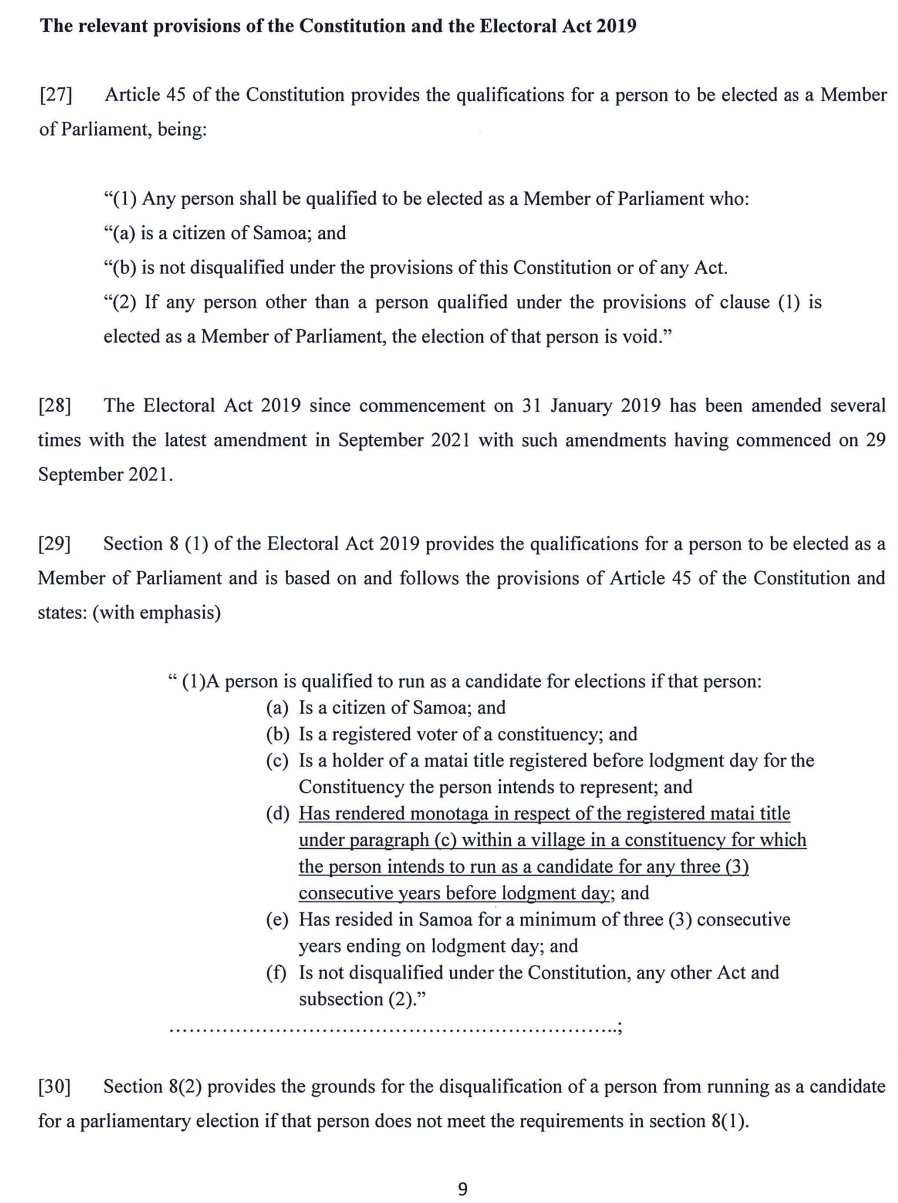 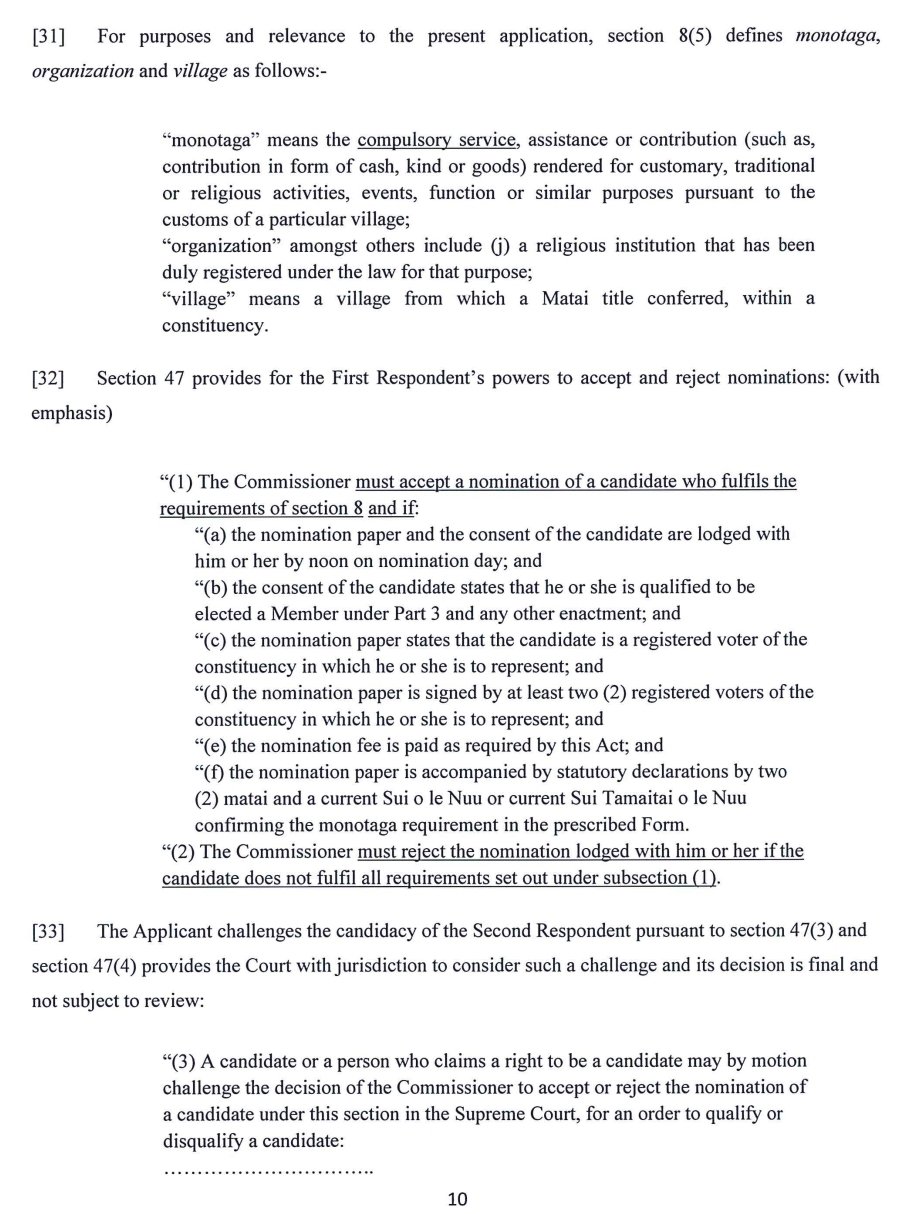 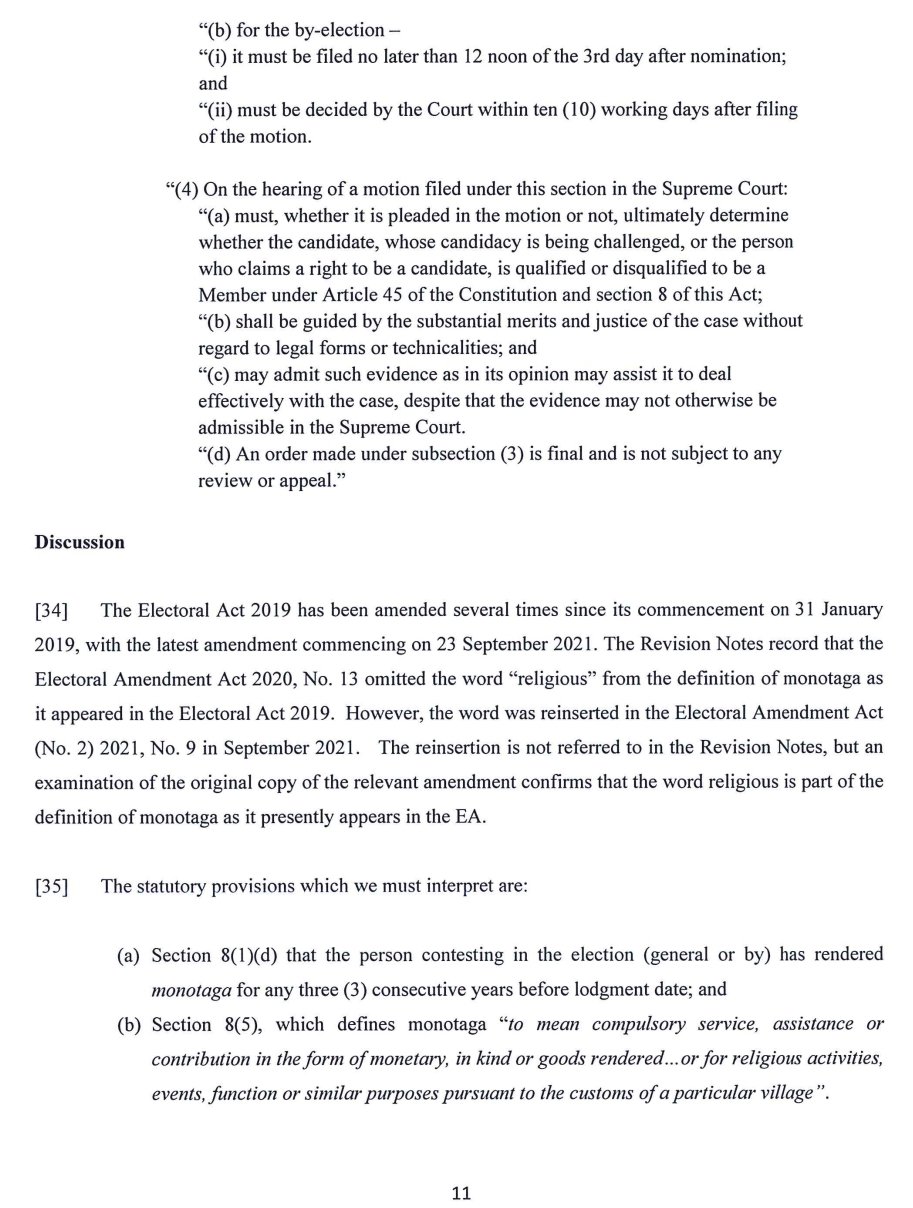 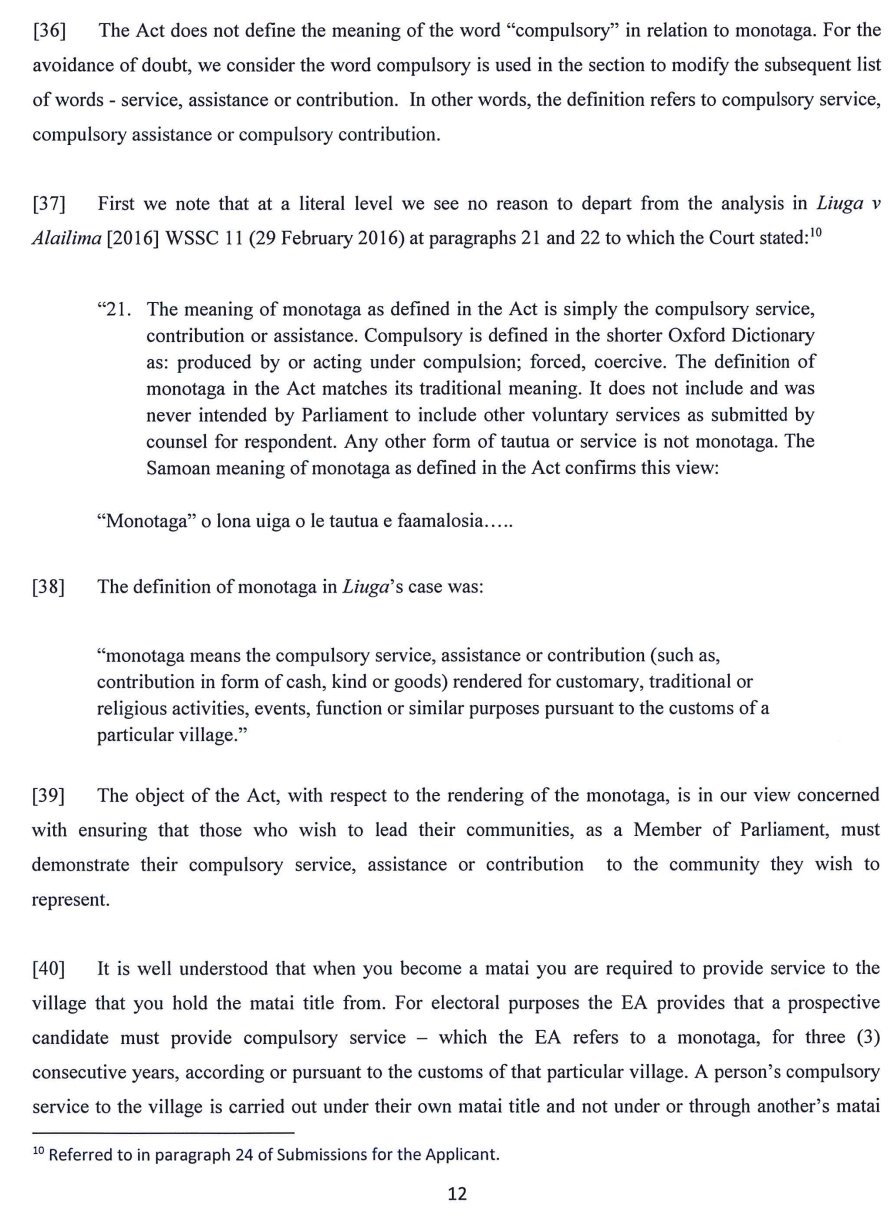 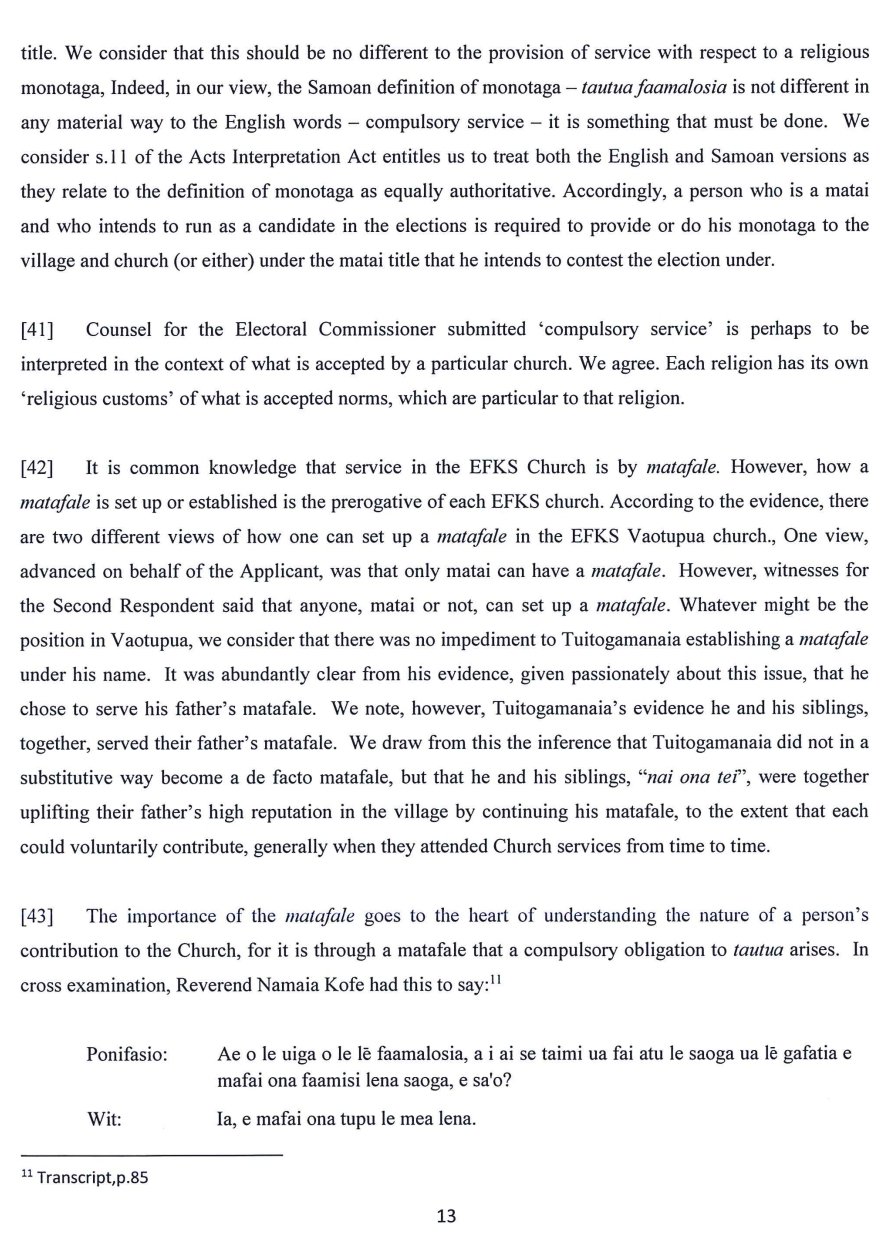 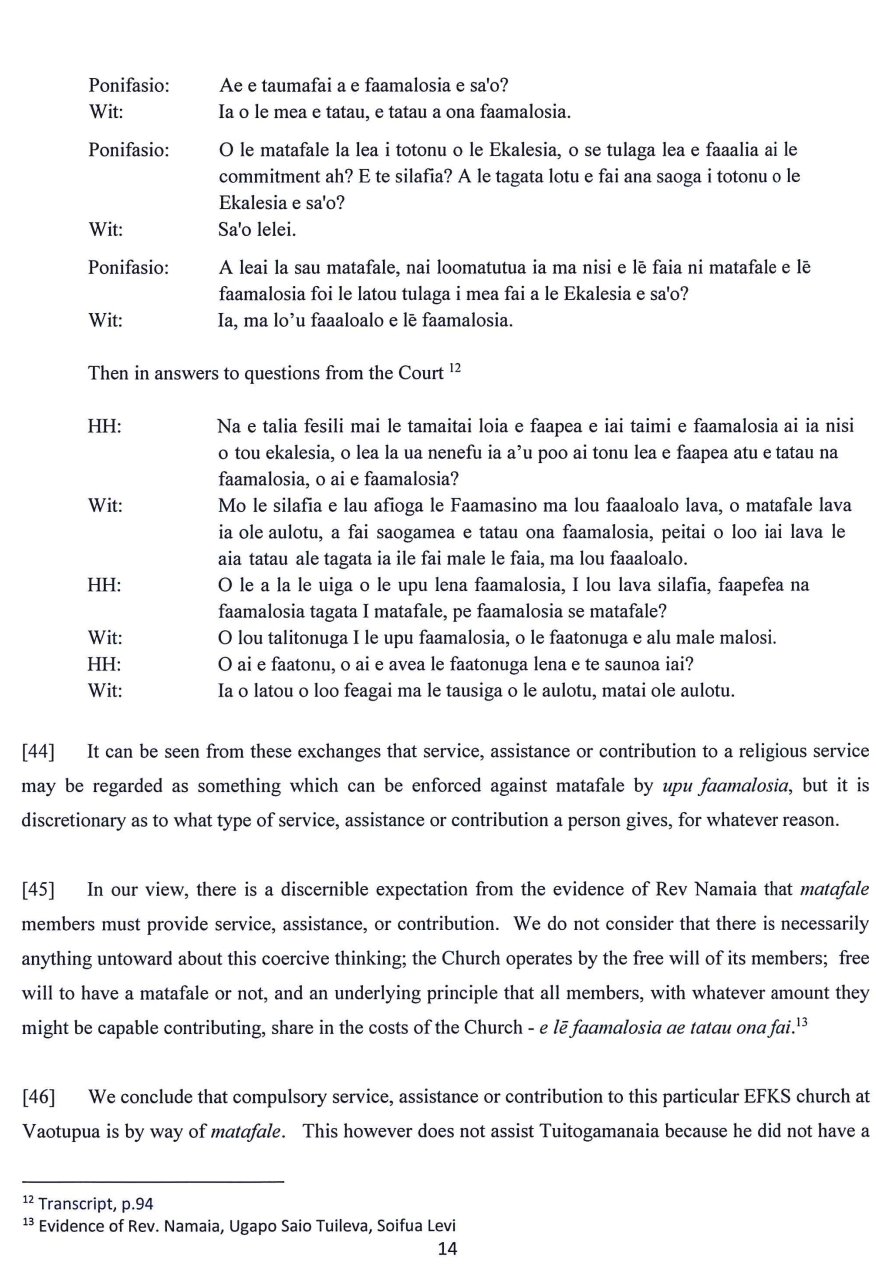 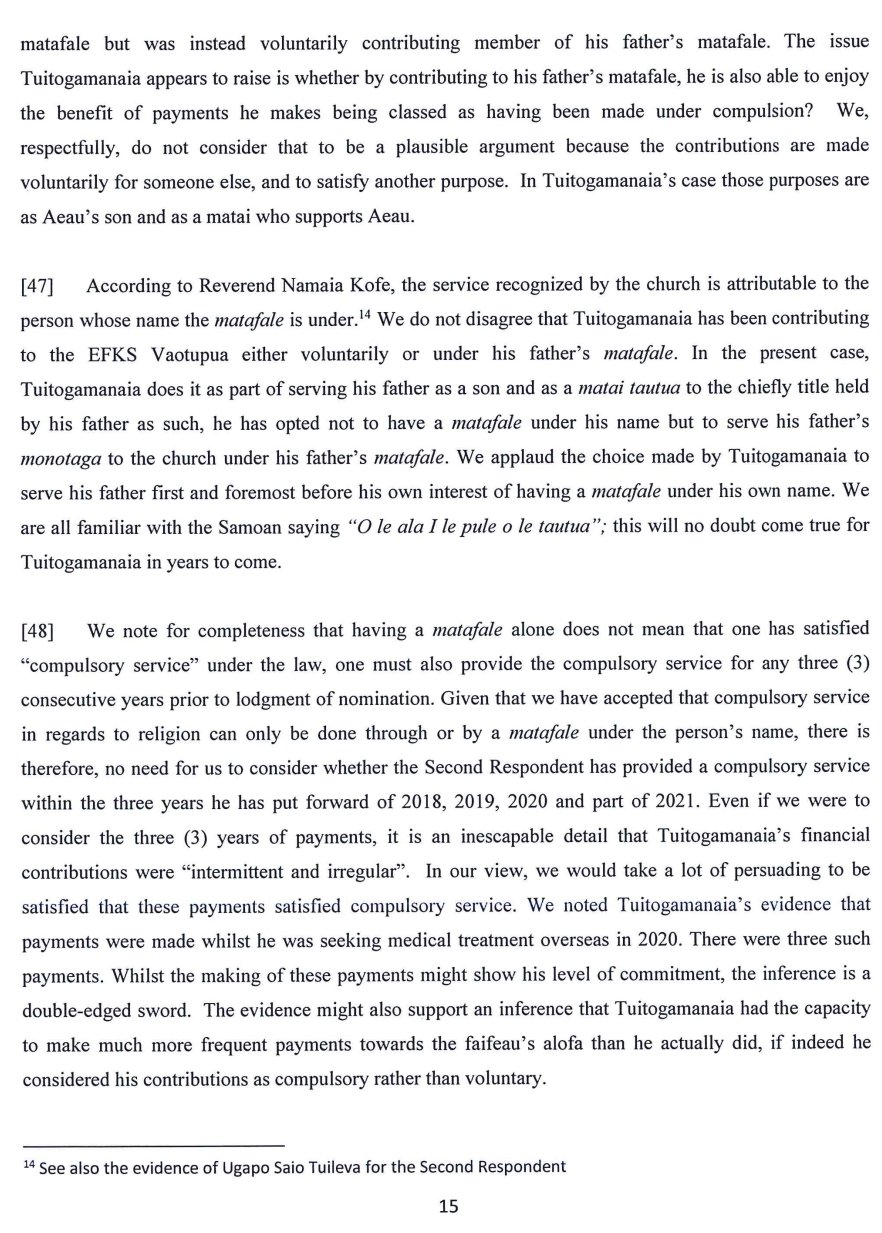 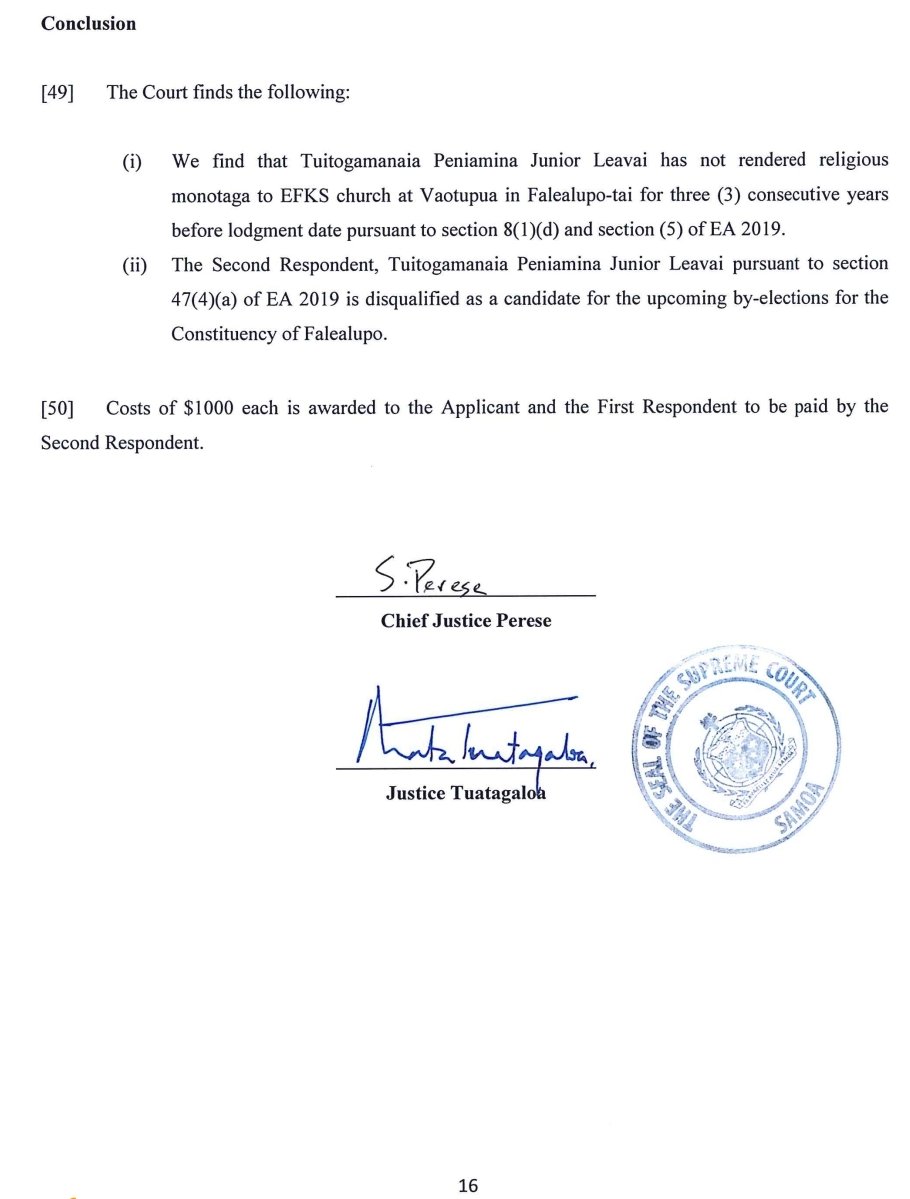