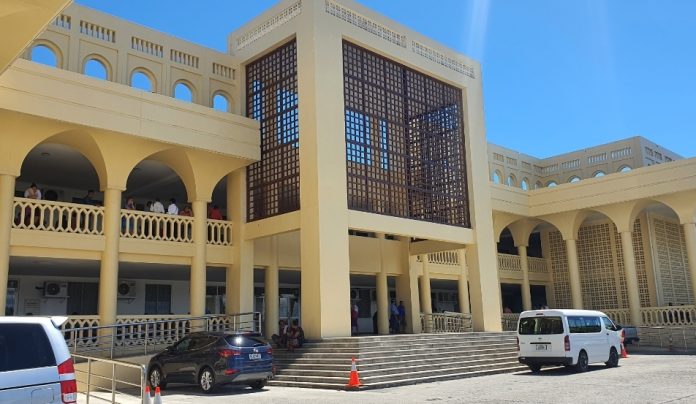 District Court Judge Alalatoa Rosella Papalii, cautioned the prosecution to finalise charges prior to matters being called before the Court so as to expedite matters and avoid repeated requests for adjournments.

Judge Alalatoa set down the warning during the case of nine Falelatai men including Village Council chiefs, all facing charges in relation to intentional damage of water pipes leading to families of a breakaway village (faiganuu fou).

Prosecutor Ioata Tanielu of the Attorney General’s office asked the Court for a further two week adjournment to finalise charges. According to Prosecution there were certain aspects of the police investigation that were incomplete, and they intended to add further charges, as well as charge more people in relation to the incidents.

Last month police responded to a dispute between villagers at Matautu Falelatai, caused by a Village Council ban on new churches being established in the village.

A former Judge of the Lands and Titles Court (LTC) also a high chief of Falelatai, Anae Misa Pita, wanted to establish a branch of the Seventh Day Adventist Church in the village for those who had converted. This was disallowed by the Village Council who say the ban on new churches in Matautu Falelatai is a well known fact by all members of the village.

The dispute reached an impasse and Anae Misa Pita formed a breakaway village.

Police had confirmed to SGN at the time of the arrests, that those charged are members of the original Village Council “nu’u tele” who 1 hidallegedly cut all the water pipes to the families of the breakaway village, leaving them without a water supply. Children from the breakaway village had also been banned from attending the village primary school.

Representing the villagers is defense counsel Sifuiva Maureen Tuimalealiifano. Sifuiva did not object to the adjournment application, but noted the difference in the charges being presented.

“The prosecution has not finalised its charges [against my cleints] and the charges that were notified to us are quite different from the charges filed,” said Sifuiva.

“I haven’t been able to obtain instructions [from my clients] as we are unclear as to the charges.”

Judge Alalatoa said the charge before the Court is intentional damage. The Judge then asked Mr Tanielu whether there would be further changes and if this was a “delaying tactic” by prosecution.

Mr Tanielu told the Court the issues were complex. He said they expected additional changes, and the number of defendants was also likely to increase.

Judge Alalatoa pointed out this matter was initially adjourned from two weeks ago, and this additional two weeks would make it four.

“This will be the final adjournment and by then the Police should finalise the charges;

“It should be noted that prior to [charging people] charges should be finalised to avoid any delays of cases. Also the accused have rights under the Constitution to have their matters conducted in a timely manner,” said Judge Alalatoa.

Her Honour then granted a final adjournment to 11 November.