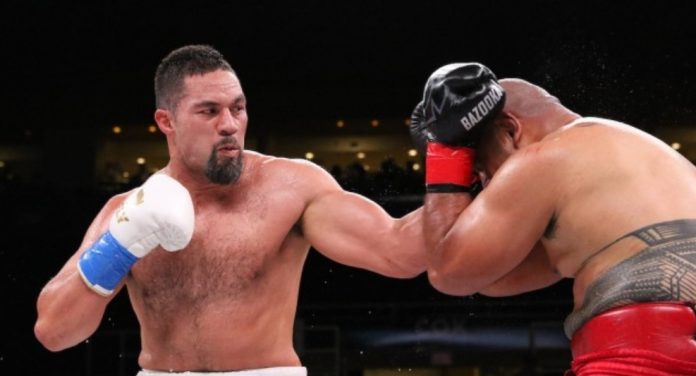 Joseph Parker prevailed in the battle of Samoa  in Providence with a 10th round TKO win over Alex Leapai.

Parker held advantages of both height and reach over 39-year old Leapai in this first fight under new promoters Matchroom Boxing and Eddie Hearn.

Parker began the first round in style, landing several blows to the body and head, with Leapai on the ropes in the opening minute.

Leapai would weather the storm though, landing a few blows of his own – only to see Parker take the initiative to end the first round.

Parker kept up his relentless approach in the second round, with Leapai again forced backwards by a volley of shots to the body – with the referee having to suspend the round after a low blow from Parker.

After the resumption, Leapai could only find himself on the ropes, somehow surviving until the end of the round.

Leapai would again complain of a low blow at the of the third round, this time his protests going unheard by the referee. Parker’s jab and superior reach saw Leapai having to keep his distance. The end of the third more favourable for Leapai as Parker started to tire.

The fourth round came and went with Parker frustrated at being unable to land a decisive blow, Leapai looking to take any advantage he could into the fifth.

Leapai did go down in the fifth round, however it came as a result of lost footing, rather than Parker landing a shot.

Parker’s frustrations would continue on into the 10th round, with Leapai proving to be a stubborn contender living up to his ‘Lionheart’ nickname with a tremendous display of toughness, particularly after taking the fight on two weeks notice when when a deal with Eric Molina fell through

Ultimately though, the referee would stop the fight in the 10th, ruling Leapai unable to continue, handing Parker the win.

I was pleased with my performance, it was my first fight in six months,” Parker told DAZN’s Chris Mannix afterward.

The TKO win was Parker’s second on the bounce since suffering back-to-back losses to Anthony Joshua and Dillian Whyte in 2018, improving his record to 26-2.