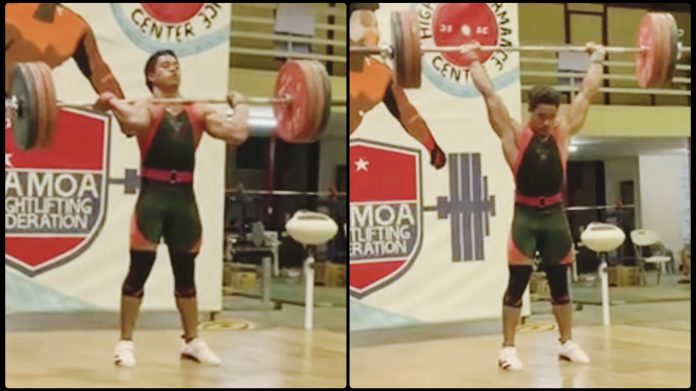 John Tafi has broken three records for the 73kg men’s division of the Oceania Junior Champions 2022 held over the weekend. The 20 year old snatched 133kg, and lifted 165kg in the jerk to total 298kg and set the new Oceania Junior record.

The lifts were also his personal best, and this is the second year in a row the now 20-year-old has smashed Oceania records at the Junior Championship event.

The Samoa Weightlifting Federation continues its medal-winning performances with two gold, one silver and one bronze over the weekend’s online event, where Samoa’s lifters competed from the High Performance Centre at Tuanaimato.

Speaking to Samoa Global News, John Tafi, who is one of six lifters who have qualified for the upcoming Commonwealth Games, said the weekend’s competition will be an important part of his preparations for Birmingham. He said he was happy with his performance and personal best records, and had really wanted to do well for Samoa, but also for their Coach Tuaopepe Asiata Jerry Wallwork, who was overseas during the weekend’s event.

“Training for our events are not easy, it is a lot of hard work,” said the youngster. He said the trainings start to intensify in the lead up to competition, with trainings two and three times a day being their norm.

“As we get closer to the day of competition, the training gets harder..”

John Tafi lives with his parents in Lotopa, but the Samoa weighlifting team have been camped for most of the past year at  the Tuanaimato High Performance Centre.

Tafi’s aunty, Mrs Rita Poloma, told SGN the gold medalist is a disciplined young man who loves to help his father on their plantation.

“John grew up as an average student at school, but he always tried hard. Weightlifting has given him this opportunity to represent Samoa and achieve great things for himself,” said his aunty.

“John grew up in a family who does have much, but he has always tried hard at what he does.. We never thought John would have a future in the sport of weightlifting.”

“We are so proud of his achievements, and his parents are so happy for him, that he has made a future out of this sport that he loves.”

Samoa Weightlifting Federation Head Coach and President, Tuaopepe Jerry Wallwork has a unique way of taking vulnerable youth and training them into medal-winning, record-breaking champions, and this has continued as Samoa gears up to the Commonwealth Games scheduled for Birmingham, United Kingdom between 28 July – 8 August.