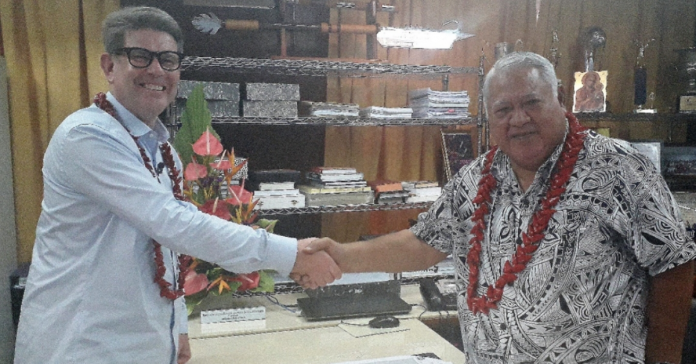 07 August 2019, Apia Samoa. Award winning journalist and TV broadcaster John Campbell has had an eventful visit to Samoa with the bestowal of a chiefly title by the Head of State and a meeting with the Samoa Prime Minister.

John Campbell was taken by surprise when the Head of State of Samoa Afioga Tuimalealiifano Vaaletoa Sualauvi II during a welcoming ceremony for the Manu Samoa team, laid his hands on the Breakfast host and bestowed the Toleafoa title upon him.

Campbell is well loved in Samoa with many crediting the historical All Blacks – Manu Samoa test match of 2015 in Apia to his drive and public campaigning.

Campbell has taken a keen interest in the Manu Samoa since the 2011 Rugby World Cup (RWC) in New Zealand where he had publicly campaigned to raise funds for a World Rugby fine handed down to Alesana Tuilagi for wearing a branded mouthguard.

Following the 2011 RWC Campbell exposes financial misappropriation of funds within the Samoa Rugby Union through a report where he states, ‘Samoan rugby deserves more than the cynical, old men running it’.

A press statement released by the Government Press Secretariat shows a photo of Campbell with Tuilaepa captioned, “Toleafoa John Campbell of TVNZ with Prime Minister and Chairman of the Samoa Rugby Union Tuilaepa Sailele Malielegaoi at the end of a detailed interview into the challenges faced by Samoa Rugby and Manu Samoa in their preparations for the World Cup in Japan later this year.”

According to the press release, Campbell’s interviews are part of a documentary program that focuses on the challenges facing Tier 2 nations and will be aired in New Zealand before the RWC kicks-off.