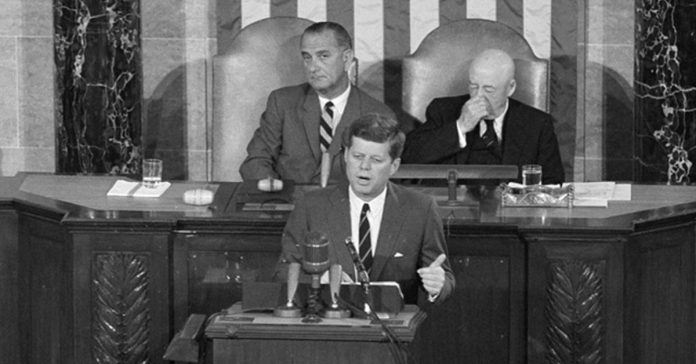 “We choose to go to the Moon“, officially titled as the Address at Rice University on the Nation’s Space Effort, is a speech delivered by United States President John F. Kennedy about the effort to reach the Moon to a large crowd gathered at Rice Stadium in Houston, Texas, on September 12, 1962. The speech, largely written by Kennedy advisor and speechwriter Ted Sorensen, was intended to persuade the American people to support the Apollo program, the national effort to land a man on the Moon.

In his speech, Kennedy characterized space as a new frontier, invoking the pioneer spirit that dominated American folklore. He infused the speech with a sense of urgency and destiny, and emphasized the freedom enjoyed by Americans to choose their destiny rather than have it chosen for them. Although he called for competition with the Soviet Union, Kennedy also proposed making the Moon landing a joint project.

The speech resonated widely and is still remembered, although at the time there was disquiet about the cost and value of the Moon-landing effort. Kennedy’s goal was realized, in July 1969, with the successful Apollo 11 mission.