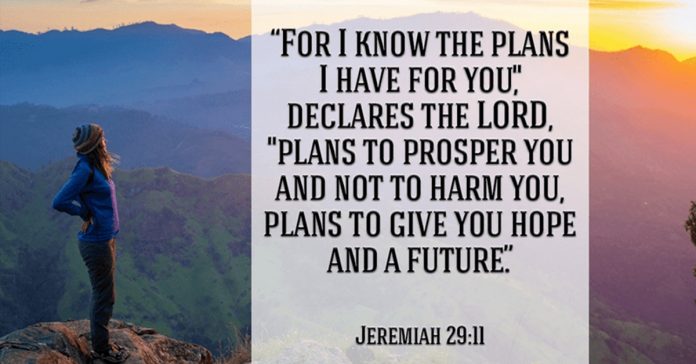 For I know the plans I have for you, declares the Lord, plans to prosper you and not to harm you, plans to give you hope and a future.

“For I know the plans I have for you,” declares the Lord, “plans to prosper you and not to harm you, plans to give you hope and a future.” (Jeremiah 29:11 NIV)

Some verses almost take on a life of their own.  They become slogans, such as the ever popular “God is good…” (found in a number of the Psalms), to which folks invariably answer, “… all the time!”  When verses become slogans, however, their meaning for our lives is sometimes lost.  One such verse is the promise found in the Old Testament book of Jeremiah:  “For I know the plans I have for you…plans to prosper you and not to harm you, plans to give you hope and a future.”  This verse is quoted often, but I don’t think many of us realize how unusual it actually is, in terms of its context.

More than five hundred years before Christ, God’s people were living in Judah and, although they were going to the temple regularly, their hearts were turning away from God.  They had even begun to worship idols.  God loved them so much that he sent them warnings through the prophets; but they wouldn’t listen.  Even when the Babylonians were encircling Jerusalem, as judgment was coming upon them because of their disobedience, God sent prophets saying, “Turn to me even now, and spare yourselves.”  But the people would not heed.  So the Babylonians came in and tore down the walls, smashed the temple, conquered, pillaged, and took talented Jewish people such as the prophet Daniel, and the three Hebrew children:  Shadrach, Meshach, and Abednego; and they scattered them throughout the Babylonian empire.  But Jeremiah was still in Judah.

The Israelites would be in captivity for 70 years.  And it was to these people in exile that God was saying, “Although you are now reaping what you have sown by your actions, I still have plans to bless you, to deliver you, and to make you a blessing.”

This promise of God, delivered at this particular time, must have seemed strange to the people who were now in a position of vulnerability under the rule of the Babylonians.  What a time for God to tell them that he had plans to prosper them and not to harm them!  I’m sure it was hard for them to believe that!!

When the bottom has fallen out, and we’re discouraged and depressed, it’s difficult to believe that God has a plan, isn’t it?  It makes more sense in the natural to give in to panic, nail-biting and sleepless nights.  But God makes that most promising statement when we’re down, because he wants us to believe—to believe in his love, in his mercy, in his healing power, in the promise that you can have a new beginning with him.

God wants you to know today, just as he wanted the Israelites to know, that he loves you and has a plan for your life.  He has had a purpose for your life since before you were even born.  Can you believe that?  It’s not about how you feel or what others have said or what someone may have done to dishearten you.  In God’s sight, you’re not a leaf in the wind or some accident or hopeless case.  If he had a plan for disobedient Israel, certainly he has a plan for you.  It doesn’t matter that you’re not well-known or that you don’t have a lot of money or a PhD.  Don’t say you’re too young or too old or that you’ve messed up too much.  His Word says that he is “able to do immeasurably more than all we ask or imagine, according to his power that is at work within us” (Ephesians 3:20).

Won’t you take his hand and believe him for the great purpose he has for your life?

Blessed is the One who Trusts in the Lord, Whose Confidence is in Him

The Testing of Your Faith Produces Endurance