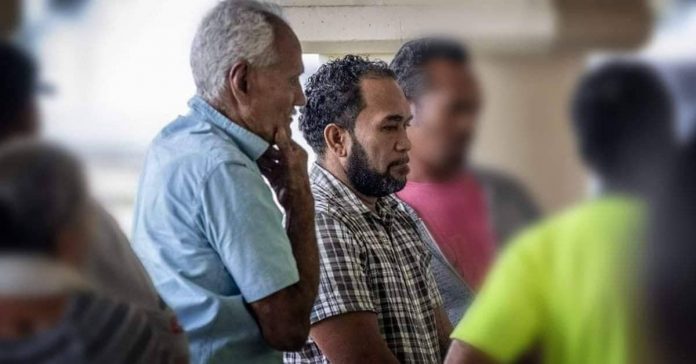 26 June 2019, Apia Samoa. Afa Tila, 38, of Satuimalufilufi and Mulifanua has been sent to Tafaigata for 11 months by Justice Leiataualesa Daryl Clarke for stabbing his 17 year old wife in the eye with a wooden stick.

Afa Tile’s young wife had decided to leave him for repeated incidents of violence which according to her testimony, arose out of excessive jealousy.

He had entered an early guilty plea to one charge of intent to cause grevious bodily harm to his wife Fatima Mikaele.

According to the police summary of facts, Afa had gone over to his wife’s home to try and make amends with her after she’d left him the day before, threatening to leave him for good.

Fatima told Afa that she wanted a divorce because she was tired of getting beaten up by him, mostly over incidents where he would become jealous (fuā).

When Afa arrived his wife was in an outer kitchen baking cocoa beans. An argument between Afa and his wife broke out, and Afa caused the beans to splatter on the ground.

The report said that while Fatima was trying to pick up spilt cocoa beans from the ground, Afa attacked her.

“Afa tried to stab the victim in the eye with a wooden stick but she dodged and the stab went through her right shoulder;

“He stabbed her the second time and she tried to stop him but she slipped and the wooden stick caught her right eye.”

“She wants to withdraw the matter because you have already reconciled and addressed your relationship.”

Justice Leiataualesa described Afa’s attack towards his wife as a “cowardly act.”

“Your assault at the end of the day was a cowardly attack on your young wife,” he said.

Justice Leiataualesa reiterated that domestic violence in Samoa has become a significant
problem despite the many awareness programs raised about the issue.

“As you should be aware from televison, newspapers and government programmes domestic vicolence in Samoa is a significant problem,” said Justice Leiataualesa.

“Yet despite the awarness raised about domestic violence with the hope of stopping it in Samoa it continues to be a significant problem.”

He went on to say that the problem is particularly prevalent in “Intimate Partner Relationships”, sighting the findings of the National Public Inquiry into Family Violence by the Ombudsmans Office.

“There continues to be a very high number of domestic violence matters in Samoa and that is the experience of this Court,” he said.

Justice Leiataualesa told Afa that a custodial sentence is a deterance and a way to send out a strong message to the community.

The National Public Inquiry into Family Violence in Samoa found that 6/10 women experience intimate partner violence in their lifetime and highlights rages from jealousy as a common trigger to men abusing their partners.

Most studies point to under-reporting of intimate partner violence because women often suffer from victim blaming, making excuses for the perpetrator, often blaming themselves for the incidents of violence against them.

Justice Leiataualesa told Afa that violence is not a way to resolve differences between him and others.

“I accept that you are genuinely remorseful for your actions, you have been forgiven by your wife and you have been punished by your village.”

“The sentence I will impose will be both a deterent sentence to deter you and others from this type of offending but also more importantly to address the cause of your offending which was your anger;

“Afa in sentencing you it is important that when you have differences with others that those differences should be resolved peacefully and
through discussion and not violence.”

A deduction of 6 months for Afa’s remorse and reconciliation with the victim, 3 months for the village penalty of $2,000 tala and 50 boxes of tin
fish, and 4 months for his early guilty plea.

If you or someone you know is experiencing violence, please call the Police Domestic Violence Unit on Ph 22222 or Samoa Victim Support on Ph 7576600.

National Inquiry on Family Violence in Samoa report can be downloaded on National-Inquiry-Report-Into-Family-Violence_-State-of-Human-Rights-Report-2018-SUMMARY_English.pdf