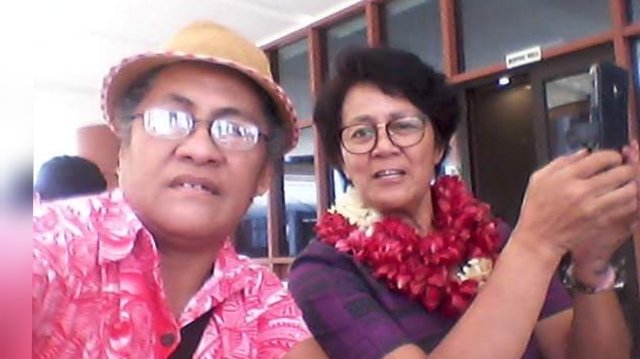 The President of Samoa’s Association of Journalists (JAWS) has highlighted the important role of the media in a democracy, and expressed concern in how the Government Press Secretariat had forcibly removed members of the local media from where they had stood to view the Atoa Samoa traditional welcoming ceremony last week.

The police guard inspection by the Governor of American Samoa was followed by welcoming speeches of the two leaders, and a traditional exchange of gifts between the Governments of the two Samoa’s. It was an event that attracted both local and news media from American Samoa.

Local media representative for the New Zealand based Radio Samoa, Maina Vai, says she was standing next to a Government Press Secretariat staff member when she was told to move, and shown a different spot. One with poor visibility for any decent photos.

“When I refused to move he said I would have privileges removed, and wouldn’t be able to attend any more government events.”

As local media were being told to move back from the ceremony, Government Press Secretariat were standing in prime positions to capture the event. One member of the local media said he was told to move away, and shown to areas where the sun was beating down.

“When I told the press office staff that my photos would not be clear from way back there, she told me she didn’t care about my photos – ou ke lē kea i gi au aka”.

In response JAWS President, Lagi Keresoma said she wants to highlight the role of the media in a democracy, and the separate role of the Government Press Secretariat, which is to inform the private media and disseminate information for the public.

“But instead, they are competing with local media” said Keresoma.

The JAWS President said it’s important to remember that in a democratic system of government, the role of the media is to attend and capture all public events, “and to ask questions and hold leaders accountable,” she adds.

“Instead, the Press Secretariat who are fully funded and fully resourced by government, are blatantly given priority and privileged filming positions at events, while private media are shown to the back of tents.”

The President of JAWS said this was not the first time private media have been treated differently. She referred to previous government hosting of events such as the visit by New Zealand Prime Minister Jacinda Ardern where Ms Keresoma said only Press Secretariat staff members were allowed to set up facing the dignitaries while local private media were shown to the back of the room.

Ms Keresoma said the Government press need to understand their role and learn to work together with the local media instead of trying to be a media service provider themselves.

“The Press Secretariat becoming reporters of public events hosted by Government can be seen as propaganda funded by tax payers,” said Keresoma.

“That is not how transparency and accountability works in a democracy.”

On another example the JAWS Presiden said they could not get the programme of events from the Press Secretariat in the lead-up to the Atoa Samoa meetings held in Apia last week.

“We kept asking for the programme, and eventually, I was given a copy from one of our members who works out of American Samoa.”

Ms Keresoma said there are also areas where local media representatives have to comply with protocols and requests sent out before an event. “For the Atoa Samoa talks, two notices were issued for media to use the Independence accreditations, and make sure they bring them along. However, many did not comply, which caused issues when they tried to enter Taumeasina.”

By contrast, the Speaker of the House has confirmed the decision to allow local media with their cameras into Parliament this morning for the swearing-in of the Head of State for a second and final 4-year term.

“JAWS has been informed that each media service provider is permitted up to three members,” said Ms Keresoma. “Photos can also be taken while seated, but flashes must be off as to not disturb the proceedings.”