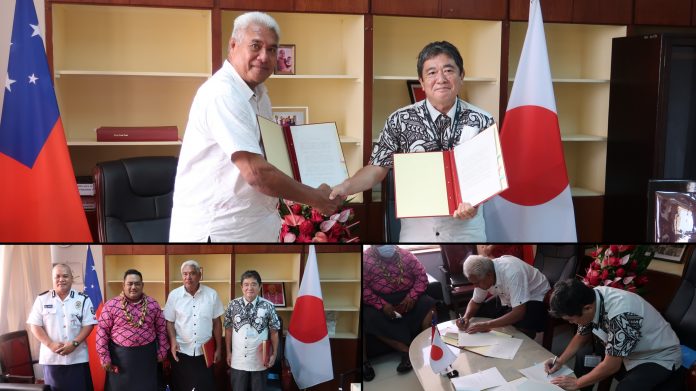 The assistance reaffirms Japan’s commitment and partnership with the Government of Samoa in maritime security.

The patrol boat is funded Japan’s Economic and Social Development Programme which benefits Samoa in so many ways.

An Exchange of Notes between the two Governments was signed between Hon. Faualo Harry Jeffrey Schuster, Minister for Police and Prisons of Samoa, and H.E. Mr. SENTA Keisuke, the Ambassador Extraordinary and Plenipotentiary of Japan to Samoa.

“It will enhance border protection from external security threats including transnational crime, illegal immigration as well as illegal, unreported and unregulated fishing..”

The patrol boat will support Police in its effective emergency response services for disasters, such as coastline surveillance, and search & rescue operations.

The signing of the Exchange of Notes between Hon. Faualo Harry Jeffrey Schuster and H.E. Mr. SENTA Keisuke reaffirms the continued friendship and warm relations between Japan and Samoa.