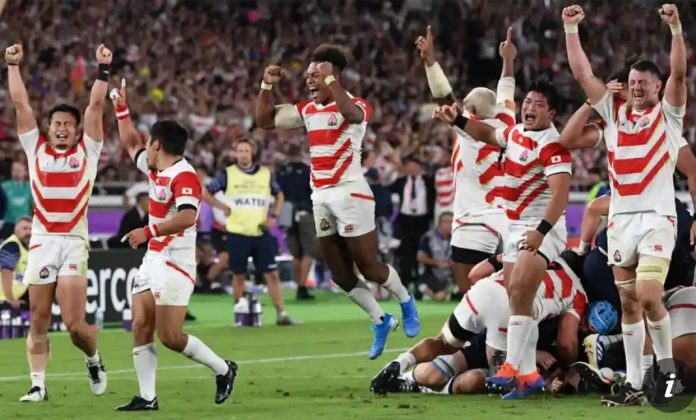 Japan have made history by being the first side from Asia to make the Rugby World Cup quarter finals by beating Scotland in one of the most exciting pool matches of the tournament 28-21.

Scotland started off well with Finn Russell going over for an early try in the 6th minute, coming off an in-to-out angle around the ruck. Laidlaw added the extras but Scotland were then on the receiving end of a sharp Japanese side who stayed focused and patient in their response.

Fukuoka received a miss pass from Lafaele on the left touchline, then gasses up the line and gets an outrageous one-handed offload inside pass to Matsushima as he himself draws in Harris. Arguably the try of the match as Kotaro Matsushima flies over the tryline in the 18th minute.

Less than 10 minutes later Horie carries the ball hard into contact and offloads the ball to Labuschagne who finds his pack pal Inagaki out of the tackle to ground it under the posts. Tamura converted to extend Japan’s lead 14-7 in the 26th minute.

Japan’s third try came off another super-assist by Japan’s Timothy Lafaele who dinks a beatiful little grubber-chip through for Fukuok. The ball bounced a little higher than Fukuoaka might have liked but the buzzing on-form winger of the Rugby World Cup still gathered it one-handed and surged past Stuart Hogg to score his side’s third try.

Scotland could hardly complain about the 21-7 half-time margin, with Japan having enjoyed three-quarters of territory and possession, and carried for 339 metres compared to their 54.

Scotland were relieved to see Jonny Gray avoid a card of any colour after a clash of heads with Shota Horie but they had little answer as Japan stayed focus, and simply raised the tempo by another notch.

Within three minutes of the restart Scottish centre Chris Harris was collared in his own half. He had the ball ripped from his horrified grasp by Fukuaka who then caught the ball himself and raced unstoppably away for the bonus-point try that effectively sealed Scotland’s fate.

This left Scotland requiring a miracle come back  to save them and, for a while there, the Scottish hinted at another miracle. They did launch a comeback 2 tries within 5 minutes taking the score to 28-21.

First WP Nel crashed unstoppably over and then Russell, having taken a quick throw himself, sparked a glorious counter attack which ended with the replacement Zander Fagerson scoring his side’s third try.

Ultimately, though, it was not enough. This was Japan’s night and how they deserved it!

No side have lit up this Rugby World Cup more than Japan and here was a redeeming result for the sport as a whole as the Pacific nations fail to advance past pool matches once again.

The Brave Blossoms looking to be the fittest outfit in the tournament with highly structured plays, advance to the quarter-finals and will now meet South Africa – four years on from their famous win over the Springboks in Brighton.

The World Rugby’s patronising “Tier Two” label used to describe teams in the Americas, Asia and  Pacific regions was once again challenged by Japan’s performance last night where they dominated all aspects of the game despite very few chances to play the “Tier 1” big guns throughout a typical WR calendar year.

As was the case against Ireland, the Brave Blossoms were patient in both defense and attack, with phase-play during the match often reaching double digits. Japan raised the bar with a fast-paced, four-try success against a Scotland team whose tournament is now over.

It was less a case of Scotland playing or defending poorly and more another object lesson in Japanese excellence.

Japan winger Kenki Fukuoka has secured his position as the on-form winger of the tournament.

It was an emotional occasion with the host nation still picking up the pieces following this weekend’s typhoon, which has left both death and destruction in its wake. Rugby, at such times, is a minor detail but this result offered at least some solace.

Any team in the world would have loved to play the way Japan did in the first half. Quick, smart, precise and innovative.  The technical approaches of their Kiwi coaches Jamie Joseph and Tony Brown came through the attack strategies that rapidly forced Scotland into damage-control mode.

“Tonight we went to another level, everyone who entered the game gave 150%. Behind me I have some great coaches and that comes out with the way we play. Japanese haven’t trusted themselves in the tough moments before and this team has changed that and we’ll carry that forward.”