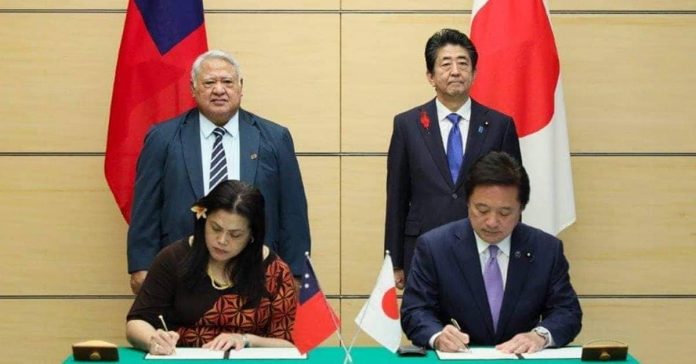 Wednesday 2nd October 2019, Tokyo, Japan. Relations between Japan and Samoa established in 1973 continues to strengthen with the signing of the Exchange of Notes between the two governments to confirm assistance to the value of ¥2,500,000,000 – over ST$62 million in today’s exchange rate.

According to a press release, this assistance is tagged for the purchase of a new inter-island vessel to improve travel services between Upolu and Savaii.

They are joined by Samoa’s Ambassador to Japan Her Excellency Fa’alavaau Perina J. Sila and Justin Lima, Counsellor of the Embassy of Samoa in Tokyo.

Bilateral talks between the two leaders focused on the sectors of Samoa’s economy where Japan has mutual interest such as climate change, infrastructure, water and sanitation, education, maritime, connectivity and transport.

Prime Minister Tuilaepa expressed to Prime Minister Abe Samoa’s appreciation for the genuine and durable partnerships developed over the years, and acknowledged the mutual cooperation and continued assistance received from the Government of Japan.

The Prime Ministers also discussed regional priorities and follow-up action on the PALM8 Declaration which was signed at the 8th meeting between Japan and Pacific Forum leaders in March 2018.

The Prime Minister of Samoa will also be travelling to the Aichi Prefecture to support the Manu Samoa set to play Japan in Toyota City this Saturday, 5th October 2019.

The Prime Minister’s delegation includes Mrs. Gillian Malielegaoi, Peseta Noumea Simi, CEO of the Ministry of Foreign Affairs and Trade, and Francella Strickland, ACEO International Relations, Ministry of Foreign Affairs and Trade. They are joined by Her Excellency Fa’alavaau Perina J. Sila and Justin Lima, Counsellor of the Embassy of Samoa in Tokyo