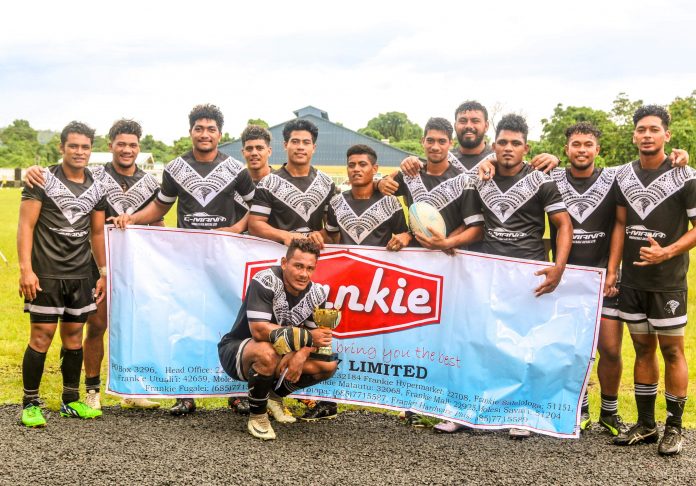 26 January 2019, Apia Samoa. The Iva White Lions regrouped after the 1st round of the Frankie Savaii 7s, recruited and came back stronger to win the 2nd Round of the tournament over defending Champions, Frankie Tama Uli.

Iva White Lions defeated Evaeva (17-5) and Sapapalii (33-0) in pool play and set a Cup Quaterfinal appearance against Frankie Salelologa. The White Lions boys in black beat Frankie Salelologa 24-5 to book a spot in Cup Semis with Maroons. Iva made sure they made it to the Cup Final two weeks in row by beating Maroons 10-0.

The Cup Final saw a repeat of the first round final. Iva made sure to not be scoreless again when speedster Palepoi Tafa registered the first 5 pointer for the White Lions. However, Frankie Tama Uli responded with a try and conversion by playmaker Paulo Toilolo.
Ricky Ene and Iva boys had other plans when Frank Tato scored again in the dying stages of the first half and took the lead to 12-7.

Frankie Tama Uli responded in the second half with a brilliant break away try from speedster Uaina Sione. However, Paulo Toilolo failed to convert the try.

Iva White Lions came back stronger with a blockbusting run by forward and captain Meki Magele that sent winger Palepoi Tafa to a try under the sticks. Iva lead 19-12 as the clock ticked down with remaining seconds.

The defending Champions Frankie Tama Uli had the last say in the normal time of the game when hard running rower Tipa Sapeti scored and leveled the match at the hooter 19-All.

Two 7 minute extra times were needed to decide the winner as the clock up to hit the second extra time, the Frankie Tama Uli was on fire and looked to seal a two win victory. However, Meki Magele came back and utilised lost possession by Tama Uli to score at the hooter and claim the Cup Winners for round 2.

“We are thankful our hardwork paid off” says skipper Meki Magele of Iva White Lions. He added “We knew it will be a tough one but we defended and empty the tank. Playing Frankie Tama Uli is always a tough ask but credit to my boys for stepping up when it matters. We lost badly last week and we wanted to pay back. We did it!” We take our hats off to Frankie Tama Uli for setting the benchmark for us to follow. Its was a exciting final and one to remember.” commented the victorious Meki Magele.

Vaovasa Afa captained of Frankie Tama Uli quickly congratulates Iva White Lions for a solid win “Credit to Iva White Lions for improving its performance this week. We knew they were hurt last week and we prepared and expect them throwing everything to us in which they did. We failed to capitalise on our opportunities and cost us the game. This is a huge build up for Marist Samoa International 7’s.”

The President of Faasaleleaga Rugby Union is one happy lad after another succesful Leg 2. “Its great when we have finals like we witnessed today. Two best teams in Savaii playing and showing us the skill levels they have and i am confident we are building our teams well for next major international tournaments. Congratulations Iva White Lions on the win today. This shows we have depth in the quality of our teams.

The next Frankie Savaii 7’s Leg will be next Saturday, 2nd February 2019 at Don Bosco field Salelologa.