The former head of the European Central Bank has led a unity government since February 2021.

In a statement, he said the pact of trust that had sustained the unity government had gone.

However, Italy’s President, Sergio Mattarella, “did not accept the resignation,” according to a statement from Mr. Mattarella’s office, and instead invited Mr. Draghi to speak to Parliament in the coming days to address “the situation that has arisen.”

President Sergio Mattarella appointed Mr Draghi to lead Italy’s post-Covid pandemic recovery, and save the country from endemic instability. He has now called on Mr Draghi to address parliament to provide a clear picture of the political situation.

The effect of President Mattarella’s intervention is not entirely clear. Mr Draghi is expected to go to parliament next Wednesday – and with sufficient backing could remain in office.

The extraordinary developments in Rome capped a day of drama triggered when Five Star leader Giuseppe Conte refused to back the government’s €23bn (£19.5bn) package of economic aid for families and businesses, arguing Mr Draghi was not doing enough to tackle the cost of living crisis.

Among them is the man who triggered the revolt, former Prime Minister Giuseppe Conte of the Five Star Movement.

But the day’s events also made clear that the gravity of scheduled elections in early 2023 would continue to pull all the parties apart, and that Mr. Draghi, who had made government unity a condition of his staying on, may yet insist on quitting.

In tendering his resignation, Mr. Draghi had said that “the majority of national unity, which supported this government since its inception, no longer exists.”

Most agreed that the next five days, ahead of Mr. Draghi’s speech in Parliament to explain his reasoning, would be crucial.

“There are five more days to work so that Parliament can confirm its confidence to the Draghi government and Italy can exit the dramatic tailspin it is entering right now,” Enrico Letta, the leader of the Democratic Party, said in a Twitter post.

If Mr. Mattarella or the political parties that would like the government to continue cannot convince Mr. Draghi to stay, it would mean instability not just for Italy but for all of Europe, and at a precarious time.

The European Union, of which Mr. Draghi is a fervent advocate, is struggling to keep unity in the face of the aggression in Ukraine by President Vladimir V. Putin of Russia.

After Mr. Draghi took office in early 2021, when Italy’s president asked him to resolve a political crisis created by the collapse of Mr. Conte’s government, he led the country out of the worst days of the Covid pandemic and packed the government with highly accomplished experts who shook Italy out of its political and economic malaise. 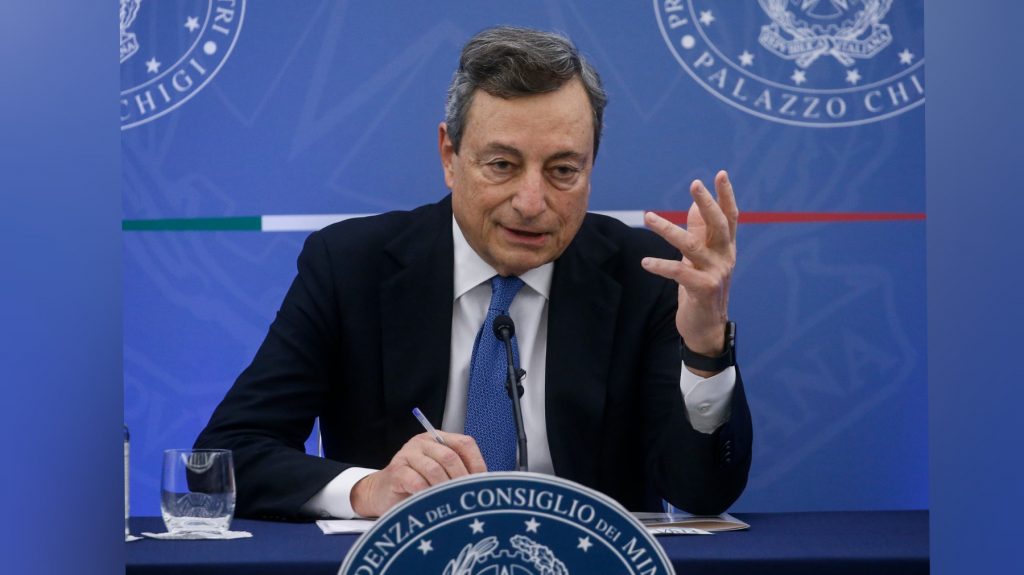 Mr. Draghi, a titan of Europe often called Super Mario for his role in saving the euro as President of the European Central Bank, immediately boosted Italy’s international standing and investor confidence.

The promise of his steady hand at the wheel helped Italy receive more than 200 billion euros, or about USD $240 billion, in relief funds from Europe — a transformational sum that gave Italy its best chance at modernization in decades.

Mr. Draghi brought moderate growth to Italy, made reforms to its justice system and tax code, streamlined Italy’s bureaucracy, and found diverse sources of energy away from Russia, including renewables.

Along the way, he made populism unfashionable and competence admirable, and he repositioned Italy as a reliable force for democratic values within Europe.

Perhaps most crucially, he played a significant role in pushing Italy, which has often maintained a close, transactional and ambiguous relationship with Russia, into the European mainstream on questions of support for Ukraine and sanctions against Russia. Italy was the first major Western nation to publicly support Ukraine’s eventual membership in the European Union.

The potential departure of Mr. Draghi opens the door to forces who are much more sympathetic to Mr. Putin.

Matteo Salvini, the nationalist leader of the League party who once wore shirts with Mr. Putin’s face on them, and whose popular support and institutional influence has waned over the last two years, suddenly mattered again.

While Five Star, after triggering the crisis, seemed willing to perhaps support the government after all, Mr. Salvini, who has also made enormous demands on Mr. Draghi, now had reason to declare the government over, allowing him to return, without necessarily accepting the blame, to the campaign footing he excels on.

“If a coalition party doesn’t back a government decree that’s it, enough is enough,” Mr. Salvini said on Italian television. “It seems clear that we should go to elections.”

He is not the only Italian political force that would welcome Mr. Draghi’s departure and the ushering in of early elections.

“With Draghi’s resignation, for Brothers of Italy, this legislature is over,” said Giorgia Meloni, the hard-right leader who has stayed in the opposition and seen her popularity skyrocket over the last year and a half. “This Parliament no longer represents Italians. We will fight to return to the Italian people what the citizens of all other democracies have: the freedom to choose who represents them. Elections immediately.”