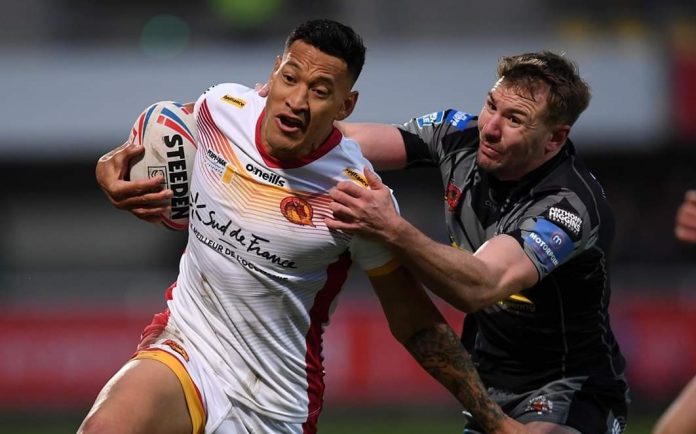 Folau, 30, who joined the French side on January 28, scored after just five minutes having caught a high up and under cross-field from cult NRL favourite James Maloney.

His name was cheered when it was read out on the sound system at Stade Gilbert Brutus pre-match, and again after his try as the crowd broke out in a chant of “Izzy! Izzy!”

Folau, who was playing his first rugby league match in 10 years, followed Sam Tomkins’ early try in the south of France.

He almost repeated the feat half an hour into the proceedings after claiming a ball in the air but was a yard short of the tryline before he was tackled.

More than 8,000 fans were present as the hosts claimed their maiden win of the campaign in Folau’s first game since featuring for Australian rugby union side the Waratahs last April.

The Dragons cruised to a 36-18 win at full-time as one protestor draped in a rainbow flag revealed she was asked twice to remove it by Catalans officials.