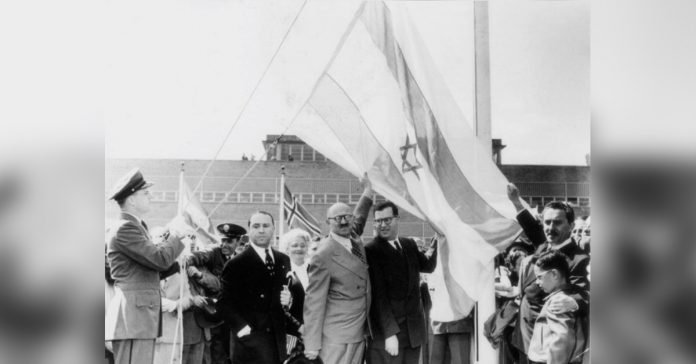 In the distance, the rumble of guns could be heard from fighting that broke out between Jews and Arabs immediately following the British army withdrawal earlier that day. Egypt launched an air assault against Israel that evening. Despite a blackout in Tel Aviv—and the expected Arab invasion—Jews joyously celebrated the birth of their new nation, especially after word was received that the United States had recognized the Jewish state. At midnight, the State of Israel officially came into being upon termination of the British mandate in Palestine.

Modern Israel has its origins in the Zionism movement, established in the late 19th century by Jews in the Russian Empire who called for the establishment of a territorial Jewish state after enduring persecution. In 1896, Jewish-Austrian journalist Theodor Herzl published an influential political pamphlet called The Jewish State, which argued that the establishment of a Jewish state was the only way of protecting Jews from anti-Semitism. Herzl became the leader of Zionism, convening the first Zionist Congress in Switzerland in 1897. Ottoman-controlled Palestine, the original home of the Jews, was chosen as the most desirable location for a Jewish state, and Herzl unsuccessfully petitioned the Ottoman government for a charter.

After the failed Russian Revolution of 1905, growing numbers of Eastern European and Russian Jews began to immigrate to Palestine, joining the few thousand Jews who had arrived earlier. The Jewish settlers insisted on the use of Hebrew as their spoken language. With the collapse of the Ottoman Empire during World War I, Britain took over Palestine. In 1917, Britain issued the “Balfour Declaration,” which declared its intent to establish a Jewish homeland in Palestine. Although protested by the Arab states, the Balfour Declaration was included in the British mandate over Palestine, which was authorized by the League of Nations in 1922. Because of Arab opposition to the establishment of any Jewish state in Palestine, British rule continued throughout the 1920s and ’30s.

Beginning in 1929, Arabs and Jews openly fought in Palestine, and Britain attempted to limit Jewish immigration as a means of appeasing the Arabs. As a result of the Holocaust in Europe, many Jews illegally entered Palestine during World War II. Radical Jewish groups employed terrorism against British forces in Palestine, which they thought had betrayed the Zionist cause. At the end of World War II, in 1945, the United States took up the Zionist cause. Britain, unable to find a practical solution, referred the problem to the United Nations, which in November 1947 voted to partition Palestine.

The Jews were to possess more than half of Palestine, although they made up less than half of Palestine’s population. The Palestinian Arabs, aided by volunteers from other countries, fought the Zionist forces, but by May 14, 1948, the Jews had secured full control of their U.N.-allocated share of Palestine and also some Arab territory. On May 14, Britain withdrew with the expiration of its mandate, and the State of Israel was proclaimed. The next day, forces from Egypt, Transjordan, Syria, Lebanon, and Iraq invaded.

The Israelis, though less well equipped, managed to fight off the Arabs and then seize key territory, such as Galilee, the Palestinian coast, and a strip of territory connecting the coastal region to the western section of Jerusalem. In 1949, U.N.-brokered cease-fires left the State of Israel in permanent control of this conquered territory. The departure of hundreds of thousands of Palestinian Arabs from Israel during the war left the country with a substantial Jewish majority.

During the third Arab-Israeli conflict—the Six-Day War of 1967—Israel again greatly increased its borders, capturing from Jordan, Egypt, and Syria the Old City of Jerusalem, the Sinai Peninsula, the Gaza Strip, the West Bank, and the Golan Heights. In 1979, Israel and Egypt signed an historic peace agreement in which Israel returned the Sinai in exchange for Egyptian recognition and peace. Israel and the Palestine Liberation Organization (PLO) signed a major peace accord in 1993, which envisioned the gradual implementation of Palestinian self-government in the West Bank and Gaza Strip. The Israeli-Palestinian peace process moved slowly, however, and in 2000 major fighting between Israelis and Palestinians resumed in Israel and the occupied territories.