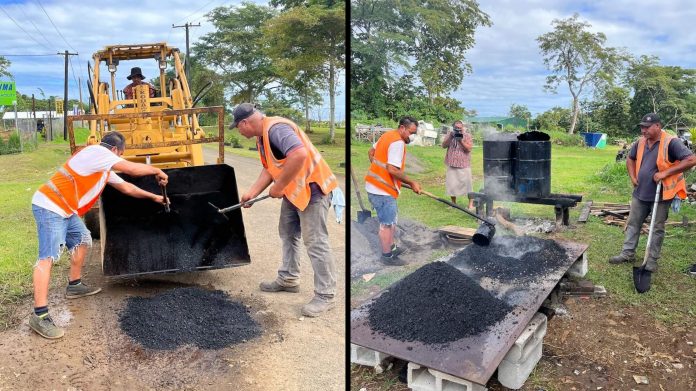 Apia, Samoa – Driving over broken glass would typically not be a good idea. However, a recent trial by the Samoa Recycling and Waste Management Association (SRWMA) may see this as commonplace on our roads in Samoa.

The production of glassphalt, a type of asphalt that contains crushed glass, is currently being piloted by SRWMA, in partnership with a local private sector company, R&R Construction.

Crushed glass can be used as an alternative to conventional bituminous asphalt to surface roads, and they’ve been known to make them less slippery and less prone to cracking.

Both a 1 to 1, and 2 to 1 ratio of crushed glass to sand have been tested by SRWMA and R&R Construction in the asphalt mixture and applied in potholes at the entrance of the Tafaigata landfill near SRWMA’s headquarters, to ease monitoring of its performance over the coming months.

These efforts are all part of the Circular Economy for the Recovery of Waste (CERO Waste) Programme, co-funded by the British High Commission in Apia, and the United Nations Development Programme (UNDP).

Glassphalt marks the fifth product to be trialed by SRWMA under the CERO Waste programme, following the success of partially replacing natural sand with crushed glass in poured-in concrete, concrete pavers, concrete blocks, and headstones.

“This trial showcases yet another example of value being recovered from waste and will hopefully encourage more people to begin segregating their glass waste to ensure it remains part of the economy,” said Verena Linneweber, Officer-in-Charge, UNDP.

The President of SRWMA, Marina Keil, expressed her excitement at the prospect of further expanding the use of crushed glass in construction and ornamental products in Samoa.

Such initiatives also contribute significantly to alleviating the pressure both on landfills, which at Tafaigata has already reached full capacity, and on Samoa’s natural resources.

Since implementation began in mid-2021, SRWMA have diverted over 700 tonnes of post-consumer glass waste from entering the landfill and crushed 168 tonnes.

“This could not be possible without our team of seven keen youth, catalyzing Samoa’s circular economy,“ said Ms. Keil.

The CERO Waste Programme, aimed at addressing youth unemployment in the wake of the COVID-19 pandemic by unlocking Samoa’s circular economy, has employed four female and three male youth, four of whom are persons with disabilities hired through a partnership between SRWMA and SENESE Inclusive Education.