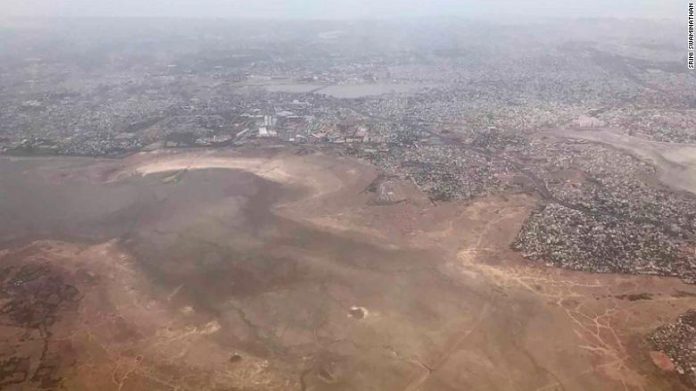 20 June, 2019. By Jessie Yeung, Helen Regan and Swati Gupta, CNN. New Delhi (CNN)The floor of the Chembarambakkam reservoir is cracked open, dry and sun-baked. About 25 kilometers (15.5 miles) away, in Chennai, India’s sixth largest city, millions of people are running out of water.

Chembarambakkam and the three other reservoirs that have traditionally supplied Chennai are nearly all dry, leaving the city suffering from an acute water shortage, said Jayaram Venkatesan, an activist in the city.

Due to an inability to collect sufficient rain water combined with low groundwater levels, the Tamil Nadu state government has been struggling to provide water to residents.

With the reservoirs dry, water is being brought directly into Chennai neighborhoods in trucks. Every day, hundreds of thousands of residents have no choice but to stand in line for hours in soaring summer temperatures, filling dozens of cans and plastic containers.

Suresh Subburaman, a resident of Chennai and owner of the Nivis Kitchen hotel, has been struggling to keep his business afloat.

“We are open and we are somehow functioning. But we are running at a no-loss, no-gain situation. This is our only business. We have no other option. We have to run it,” said Subburaman.

“Earlier the water would come every day at home. Now, we get it every three to four days. We store the water in a small tank or 20-liter plastic pots at home,” said Subburaman whose home is in Egattur neighborhood on the southern outskirts of Chennai.

M. Senthilsaravanan, another hotel owner and resident, said: “In (the) Chennai area, hotels and restaurants have shut down because we are not getting sufficient water and there is high demand.”

Senthilsaravanan lives in the Navalur suburb of Chennai and pays about 6000 rupees ($86) every other day for a tanker to deliver water to his hotel, Quality and Taste.

The private tankers come from the outer areas of Tamil Nadu state which is not suffering shortages. But the demand is so high they cannot supply on time, Senthilsaravanan said.

With supplies strictly rationed, many wealthier families have taken to relying on expensive private water tankers.

Although the municipal body has worked to prioritize low-income households, residents who book government water tankers could still wait up to a month.

It’s not immediately clear how many are without water in Chennai presently.

In 2017, 605,510 homes were tapped into a government-run water connection, according to a report from the Tamil Nadu state government’s Department of Economics and Statistics. Each connection gets 120 liters per capita per day (lpcd) and during a drought, it is reduced to 70 lpcd, the report said.

Use of private tankers to provide water are mostly inaccessible to those living in the city’s slums. Around 820,000 people live in slums in the city and cannot afford access to private tankers, the 2017 report said citing the 2011 census data.

CNN has reached out to the government of Tamil Nadu for comment.

Droughts in India are an annual problem, but this year’s water shortage has coincided with a fatal nationwide heatwave. As cities struggle to provide enough resources, those on the front lines of the crisis say it’s only going to get worse.

“Governments are now scrambling to make sure people have water,” said Jyoti Sharma, founder and president of FORCE, an Indian NGO working on water conservation. “Groundwater wells are drying faster and faster every year.”

Chennai is the latest casualty of a countrywide drought that has left 600 million people dealing with high to extreme water shortages, according to a 2018 report by Niti Aayog, a policy think tank for the Indian government.

Only a fourth of Indian households have drinking water at home, and about 200,000 people die each year due to inadequate supply or water contamination.

“It’s increasingly becoming a pan-India problem,” said Sharma. “Bangalore, Chennai, Mumbai once in a while, Delhi — they’re all in the news for the same reason. They’re running out of water.”

An entire family in one of Chennai’s slums gets just 30-40 liters (about 8-10 gallons) of water every day, said Venkatasan.

To put that into perspective, the average American household uses more than 300 gallons of water a day, according to the Environmental Protection Agency.

Most of India relies on groundwater for its water needs, instead of traditional water harvesting systems. Decades of drilling into the earth to reach water has led to severe ground water depletion.

“This is primarily because of poor management of water bodies. We are completely dependent on the rain. The government should ensure that there is water harvesting,” said Venkatesan.

One hundred million people, including those in the large cities of Delhi, Bangalore and Hyderabad, will soon be living in zero groundwater cities, according to the Niti Aayog report. This number will likely continue increasing, as the United Nations recently estimated that India’s population will surge by almost 300 million by 2050, and it will become the world’s most populous country.

Complicating the issue are the devastating effects of climate change. Monsoon rains have been more erratic and droughts more common, threatening farmer’s harvests. This could cripple livelihoods across the predominantly agricultural country, where 80% of water is used to irrigate thirsty crops such as sugar cane and rice.

“Unless we adapt our water storage to suit the change in rain intensity, we’re going to suffer really badly,” said Sharma. “All parts of India — rural, urban, everybody.”