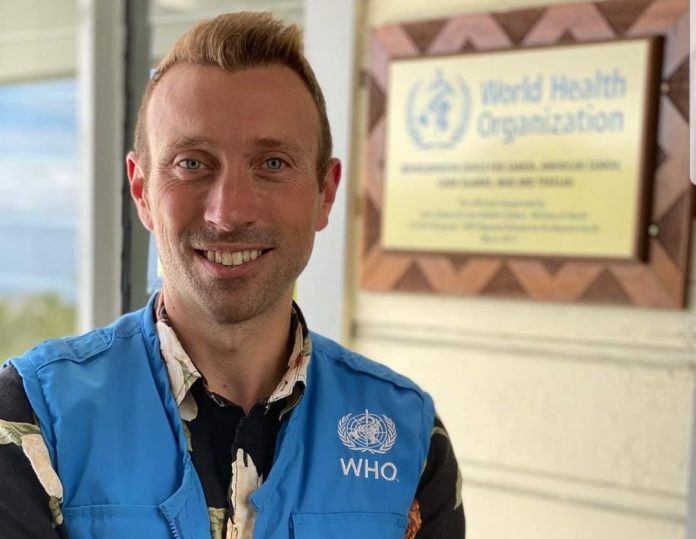 Casey is the one-man-band Health Cluster Coordinator for the Pacific in charge of the organisation and coordination of the EMTS from all over the world who have responded to Samoa’s request for help via WHO.

Emergency Medical Teams are groups of healthcare professionals deployed to an outbreak, disaster or other emergency to support national authorities as they respond to urgent health needs.

Casey says there has been an overwhelming response to Samoa’s call for assistance with the measles epidemic.

Over 16 international EMTs have been deployed to Samoa since the measles outbreak representing over 200 highly qualified health care professionals.

Last night a team from Israel arrived with 9 Emergency Medical practitioners including 2 senior MDs, 6 ICU nurses and a physiotherapist. The team was deployed straight to the frontlines at the Motootua National Hospital.

According to Casey, Samoa has been receiving the ‘cream of the crop’ in terms of EMT’s who have answered the call for help.

Casey says that many of the teams deployed in Samoa’s measles response have undergone a quality assurance process.

“A robust review of their clinical, operational and administrative capacities to ensure that they maintain the highest standards in emergencies”.

As of this week, teams deployed to Samoa with this international verification include;
• AUSMAT,
• NZMAT,
• UKEMT
• EMTs from Norway and Israel

“Emergency Medical Teams are only deployed upon request of the host nation, and they work within the receiving country’s health system,” Casey explains.

Casey adds that EMTs are fully self-sufficient, as to not create a burden on national authorities and they commit to core principles and minimum standards, to ensure there is predictable, high-quality engagement.

Normally based in Fiji, Casey was deployed to Samoa on the 24th of November to facilitate the mobilization and coordination of EMTs to support the response.

Australia’s AUSMAT team was the first to deploy in early November, followed soon after by New Zealand’s NZMAT.

Many teams have followed since, answering the Government’s call for support.

Teams have also been dispatched from several neighbouring Pacific countries, including French Polynesia, the Solomon Islands and Kiribati,

Other teams have come from much farther afield – including
• Japan,
• Israel
• Norway
• United Kingdom

Last weekend, a 70 plus delegation of nurses and doctors were deployed from the U.S. State of Hawaii for 48 hours to support the Government’s massive vaccination campaign on December 5-6.

In the pipeline, is the EMT from the New York City and Massachusetts Hospitals, two rotations of 5 midwives from the UNFPA and 16 medical personnel from Papua New Guinea which include 3 Paediatricians, 1 General Surgeon and 12 nurses.

There has also been a response from Samoan Doctors abroad who have come forth to render assistance with 7 rotation of 5MD’s starting in December until March 2020.