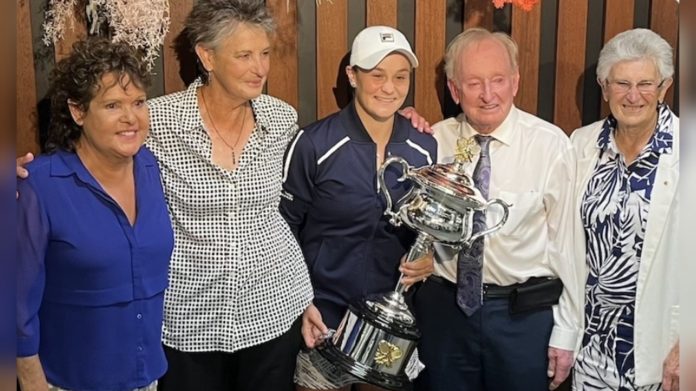 Not only did Ash Barty snap a 44-year drought by winning the Australian Open, but the feat has catapulted her into some rarefied tennis air.

By claiming victory on the Melbourne hard court, Barty now has Grand Slam trophies on all three surfaces, to go with the clay of Roland-Garros and grass of Wimbledon.

The only other active players to have achieved that feat are all-time greats Serena Williams, Roger Federer, Rafael Nadal and Novak Djokovic.

Ash Barty’s incredible victory in the Australian Open ended nearly half a century of waiting and one of our greatest ever was quick to celebrate.

Ash Barty pulled off a remarkable 6-3 7-6 win over Danielle Collins on Saturday night to claim her first Australian Open title and send tennis fans into meltdown.

Barty was near faultless in the opening set then came back from 5-1 down in the second as Collins wilted under pressure.

It was a remarkable performance from the world No. 1 as she claimed her third grand slam title — adding to her French Open win in 2019 and Wimbledon crown from last year.

Winning majors on all three surfaces — clay, grass and hard court — is an incredible feat that didn’t go unnoticed by Aussie tennis royalty Rod Laver, who was in the stands to see Barty’s emotional triumph.

“A Grand Slam champion on three different surfaces, you are the complete player @AshBarty and I am so happy for you tonight,” Laver wrote on Twitter. “There’s nothing like winning at home, congratulations #AO2022 champion, it is wonderful to be here for this moment and to celebrate with Australia.

Barty’s success on all three surfaces sees her join Serena Williams as the only other active women’s player to have won majors on grass, clay and hard court.

Laver also shared an incredible backstage photo of Barty holding her trophy alongside Aussie tennis legends including himself, Evonne Goolagong Cawley, Judy Dalton and Chris O’Neill — the last Australian woman before Barty to win the Australian Open singles title, all the way back in 1978.

Dealing with the weight of expectation of a nation hungry for success in our home tournament, Barty handled the occasion perfectly.

The result sees Barty open up a 2633 point lead on top of the WTA rankings ahead of Belarus’ Aryna Sabalenka, meaning she’ll likely remain world No. 1 for a while longer.

In an incredible piece of symmetry, New York Times tennis correspondent Christopher Clarey tweeted that Barty had defeated the same four American players en route to her French Open win as she did at Melbourne Park this year.

Barty was blown away by the victory on home soil, celebrating with friends and family at Rod Laver Arena.

Hugging former doubles partner and good friend Casey Dellacqua after match point and being presented the trophy by her idol Evonne Goolagong Cawley, no one could wipe the smile off the 25-year-old’s face.

“It’s a dream come true for me and I’m just so proud to be an Aussie,” said Barty.

“It’s incredible, time and time again we’ve come so close and now to have my hands on such a beautiful trophy after an exceptional fortnight is just unbelievable.

“But for me it’s about the memories more than the trophies, it’s the memories we make from the whole journey.

“We (her team) often talk about it being this incredible journey, this great adventure. It’s about making those things happen along the way and really enjoying it.”