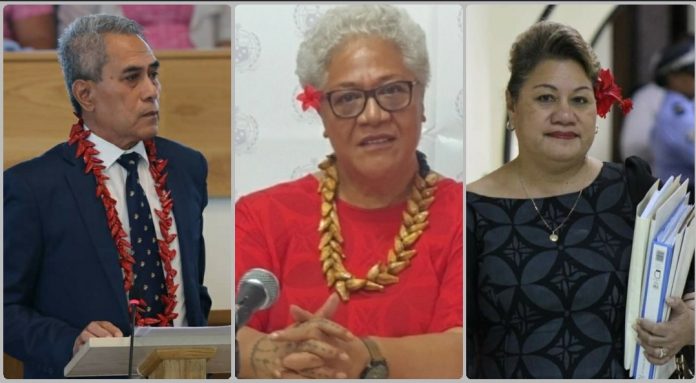 Monday 9 August 2021, Apia Samoa. After 40 years of dominance by the Human Rights Protection Party, the new FAST government are working to develop an incoming budget to reflect its pre-election manifesto and shifts in priorities.

Meanwhile former Minister of Finance Sili Epa Tuioti has raised questions about how FAST would fund certain election promises such the $51 million tala district development fund to be distributed for grassroots village projects each year.

Responding to questions from Samoa Global News, incoming Prime Minister Hon Fiame Naomi Mataafa says this is what political parties are all about.. the expression of new ideas confirmed from the country, who voice their opinions through the polls.

“We are developing a budget for the incoming government, a budget that is a tool for change, and a budget that addresses the needs of the public,” says Fiame.

The Prime Minister says the FAST government acknowledges that there are important areas which must remain intact..”However, we do need to develop a budget for the incoming government and its priorities”.

“We need an aspirational budget for Samoa, one that clearly sets out development plans and how these can be achieved,” says the Prime Minister.

“And it is important to ask, ‘How can we achieve this?'”

Fiame confirms the government are exploring different models applied by incoming governments when having to budget for change, particularly after a long period of rule by one party, as has been the case in Samoa.

“We are especially looking at those with a track record of successful shifts, for relevant examples we can adopt;

“We have sought the advice of New Zealand’s Minister of Finance, and have asked the question, ‘What’s your mechanism for a change budget?.. what format is used and what frameworks can be applied to develop a budget for an incoming government..”, shared the Prime Minister.

Fiame and the new FAST government took over office just two weeks ago on Tuesday 27 July 2021, after a Court of Appeal decision that essentially handed them the reigns on the 105th day of a national political crisis, where the country has been in limbo since its April 9th general election.

The once dominant HRPP party have taken up an aggressive role as the opposition, and the former Minister of Finance has raised questions about a FAST party election promise to allocate $1 million tala to each of Samoa’s 51 territorial districts; announced as a means to finance community-based income generating projects.

In a press statement issued Monday morning, Sili Epa Tuioti predicts budget cuts to meet election promises and says $51 million is a lot of money to find from the national budget.

“It will be interesting to see where the funds will come from, hopefully it will not come from Education and Health which have always been priority areas for all HRPP governments,” he said.

The former Fiance Minister, also a former CEO of the Finance Ministry and former President of the Samoa Chamber of Commerce says one of the problems FAST will face is the varying number of residents in each district. “Each village within the constituency will want to have their own projects, so it will be interesting to see how they deal with those issues,” said Sili.

The national budget address of May 2020 also announced a $126.3 million commitment by development partners as direct budget support “not only to help fill the fiscal gap due to the effects of the COVID19 but also to finance the Government’s assistance to the country”.

“Most of our plantation roads and village developments have been done and most infrastructure works are usually funded by donor grants which cannot be diverted to fund election promises,” Said sili.

In her first week on the job, Samoa’s new Minister of Finance Mulipola Anarosa Ale Molioo told Samoa Global News the new budget would be a transitional one, with emphasis on key strategies that will allow the new government to achieve its promise of improved human development, sustainable economy, trusted governance, secured environment and structured public works and infrastructure.

“We have been assessing the emergency budget arrangements and working on plans to formulate a strategic framework for a budget that integrates the new government’s key priority areas and the strategies to achieve them,” said Mulipola. “If not all, then through a realistic Phase 1”.

Prime Minister Fiame Naomi Mataafa confirms Parliament will convene sometime in September, for the FAST government to present its first annual budget for the remainder of the 2021/2022 fiscal year. Samoa has been operating on an emergency budget since 01 July 2021 with the political crisis blocking the normal convening of Parliament following the nation’s general election.