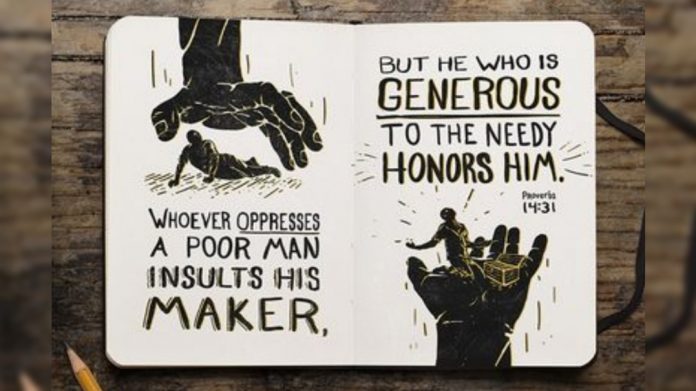 As we saw yesterday, “THERE WILL NEVER CEASE TO BE POOR IN THE LAND.”

Did you know that the Lord takes personally how we treat the poor?

Proverbs 14:31 says that “THOSE WHO OPPRESS THE POOR INSULT THEIR MAKER, BUT HELPING THE POOR HONOURS HIM.”

How do you treat the beggar in front of the supermarket, the window washer at the traffic lights, the homeless on the streets, or anyone living in abject poverty? Your treatment either insults God or honours Him.

Even if you choose not to give anything to them, you don’t have to be cruel or unkind to them when they ask for alms.

Matthew 25:40 says that “THE KING WILL ANSWER AND SAY TO THEM, ‘ASSUREDLY I SAY TO YOU, INASMUCH AS YOU DID IT TO ONE OF THE LEAST OF THESE MY BRETHREN, YOU DID IT TO ME.'”

Whenever you come across someone in need – you have an opportunity to honour the Lord.

Proverbs 19:17 also states that “WHOEVER IS KIND TO THE POOR LENDS TO THE LORD, AND HE WILL REWARD THEM FOR WHAT THEY HAVE DONE.”

Your kindness and generosity won’t go unrewarded. God, who sees what you do in secret, will reward you Himself.

Have a blessed weekend being A BLESSING TO OTHERS. Lots’a love,