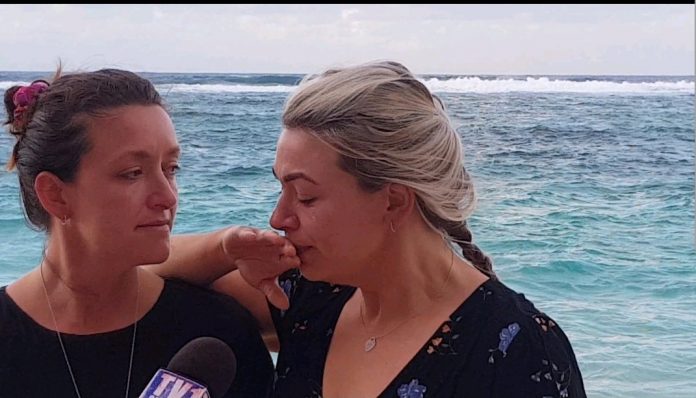 29 September 2019 Apia Samoa.  Vivien Hodgins was the life of the party. Her adventures brought her to Samoa in September of 2009 to experience a beach fale getaway with her friend and fellow school teacher, Claire Rowlands.

When the 4.5 meter tidal wave triggered by the 8.3 magnitude earthquake hit Lalomanu before 7am in the morning of September 29th, Vivien and Claire had already been at the Taufua Beach Fale property for over a week.

Vivien Hodgins was one of over 60 people from Lalomanu who lost their lives. Her friend Claire was badly injured, but survived.

The Hodgins-May family were active environmentalists, living on a farm just outside of Melbourne. Vivien was survived that day by her husband and two daughters, Stephanie and Carla Hodgins-May.

Ten years on, Vivien’s girls are in Samoa to participate in the memorial service held on Lalomanu Beach. They travelled from Melbourne Australia together to honor their mother’s memory.

The Taufua Beach Fale staff say they remember Vivien well. She had a vibrant, friendly personality, and a loud vivacious laugh.

Carla, 20 at the time, had tweeted that morning, desperate to find out if anyone had information about their mother. But they say this only led to them being inundated with messages from media organisations.

“We were still so positive when we heard that they’d found Claire alive. We thought, thank goodness, thinking they would be together;

“But some debris had hit mom in the chest..”

Stephanie and Carla find solace in hearing about their mom’s last days at Lalomanu beach.

“It was a tragedy, but we know that she would have loved her final days here;

“We have met people who said that she was having a great time, and they remember her laugh! Yes, she was the life of the party.”

Stephanie Hodgins-May had been to Samoa prior to their mother’s visit in 2009, to work with Women in Business Development Incorporated and says that it was WIBDI Director Mrs Adi Tafunai who first contacted them.

“Adi is just a dear friend now. She found Mom on the day and she was one who contacted us to let us know. We’d really like to catch up with her this time. The work they do is just extraordinary.”

Stephanie spoke passionately about the work of Women in Business and the involvement of their family.

“Our Dad worked in the organic industry, and he helped put together the Pacific Organic Standard. So I came and spent three weeks with Women in Business, visiting the organic farms and the mat weavers and the banana growers.”

“We just recently donated ten thousand dollars to the Organic Warriors Program that Women in Business ran, and straight after the tsunami we donated money towards the building of the library, and I came over with seeds and tools for Women in Business, so it’s been a long term relationship,” says Stephanie.

Stephanie and Carla say that their mom’s death has brought them so much closer together as sisters, with a strong affiliation towards Samoa. They had traveled to Samoa nine years ago for the one-year anniversary and this won’t be their last visit.

“We will try and come back as often as we can. Samoa is truly paradise, and the people are so warm and friendly;

“We thought it may have been exploited by tourism ten years on, but it has kept its natural beauty and not changed a bit!”

In Loving Memory of our Mom Vivien Hodgins-May