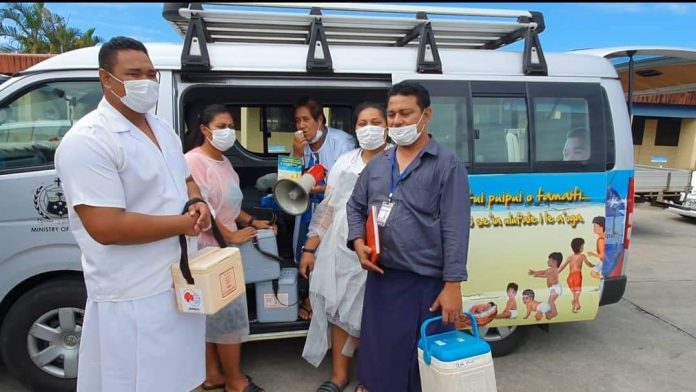 RN Koreti Aiono leads Team 1 of the Ministry of Health’s Expanded Program for Immunisation (EPI), a nurse-led program who go out daily to offer and administer vaccinations in villages.

Yesterday Aiono’s team administered over 140 measles vaccinations for children of the Church of Jesus Christ of Latter Day Saints in the Aleisa area, and last Saturday they treated over 400 people in Tanumalala.

Samoa Global News caught up with the team as they arrived back to base after spending the whole day at Aleisa Sasae where Koreti says the Church arranged transport and collected children from the area to be immunised at the church hall that had been set up as a day clinic for their work.

“The Mormon Church from Aleisa contacted our office requesting a day for their children, so we set aside today for them”.

“The Church vans brought children down from Falemauga, Tapatapao and other areas of Aleisa,”

“We administered over 140 measles vaccinations today, and we praise God, it was a great day for our team.”

There are two teams in the EPI unit of Tupua Tamasese Meaole Hospital in Motootua tasked to cover the Apia Urban area. Team 2 is led by Losa Samuelu and they had spent their Friday in the Afiamalu area. Since the measles outbreak a third team has been formed, now based permanently at the Matagialalua set-up in Apia.

The teams follow a schedule and go out daily to work with women’s committees and churches. Members of both teams shared how their work had been grossly affected by the loss of confidence in parents following the babies’ deaths in Savaii last July.

“It has been very hard to regain the confidence of parents when we go out for our outreach programs. Now with the outbreak, we are working around the clock to meet the high demand,” said Aiono.

“We have been working Saturdays also since the measles epidemic. Last Saturday we treated over 400 people in the Tanumalala area”.

World Health Organisation (WHO) representative in Samoa Dr. Rasul Baghirov told the Samoa Observer last month that it could take as much as ten years to rebuild confidence in a vaccine program again after an incident such as Samoa faced last year where the two infants received negligently preparwd vaccines.

A doctor of over 30 years experience in Samoa had called for a State of Emergency yesterday morning saying he has never seen anything like this in all his life as a medical practitioner. He told Samoa Global News that at least 75,000 children need to be immunised.

The work of the EPI teams will continue as Samoa steps up its efforts to combat the outbreak with the announcement of a State of Emergency last night by Acting Prime Minister and Minister of Health, Faimalotoa Kika Stowers.

The Ministry of Health says Samoa’s coverage of the Measles Mumps Rubella MMR vaccine is 40% however doctors in the public health system say it could be as low as 10%.

More information about what the proclamation of emergency would mean for Samoa is set to be received after a meeting of the National Disaster Advisory Committee (DAC) set for this morning at 9.30am.